I suppose I should begin this post with a general "thank you" to everybody for not saying:
"Hey Greg, why haven't you posted anything on that pupparin lately?"
This is proof positive that all of my readers are patient, well-mannered, and of the highest caliber.
Either that or nobody reads my blog anymore.
After some thought, I'm going with the first option,
because it certainly makes me feel better than the second.

Well I'm happy to announce that our favorite pupparin was just launched on October 11th, with an eventful launch ceremony, known as a "varo".

I don't know why the club waited so long to launch the boat, but when they did, they made sure it was done right.
Here are some photos of the boat just prior to launch: 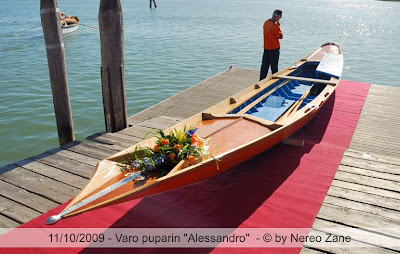 Flowers on the foredeck. 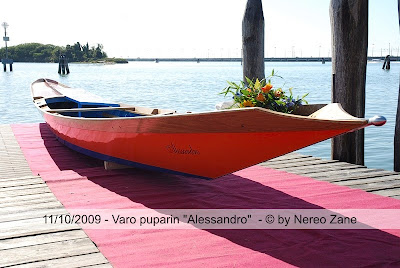 As you can see, she's got an official name now: "Alessandro" 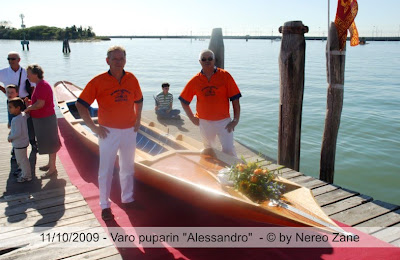 That's Maestro Marcuzzi on the left. 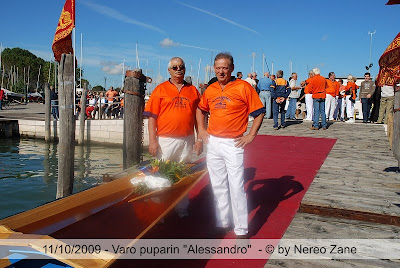 The guy sure knows how to build a boat.
Posted by Gondola Greg at 12:02 AM

What a gorgeous boat, and a fine launching.

THANKS Greg and Nereo for bringing us all the pictures as she was built.

Let's consider the saying "Rome was not built in one day". You know things can take a while to complete in the mediterranean countries and have to accept it.

However, the boat may also need to wait some time between woodwork finish and paint job to reach proper humidity rates, or other reasons may exist why it cannot be completed in one day, like a car off the assembly line.

By the way, what is the true color of its hull? That red floorcarpet is a tricky background in the sunshine.

I also wonder if a mascareta will be named Alessandra or Alexandra, since the puparin received a male titular?