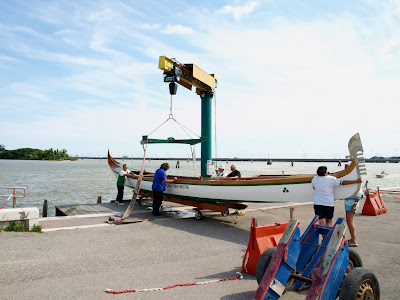 I realize that I've blogged a lot about my rowing club, the Gruppo Sportivo Voga Veneta in Mestre, but I'm willing to admit that there are other clubs out there.

In fact, over at the GSVVM, we share hoists with another club - the Cannottieri Mestre.

If you've spent any time rowing in Venice, or have dedicated some effort to researching rowing clubs, you probably know that there are a few standard words used by most rowing clubs. You'll see a lot of "gruppo sportivos" and "cannottieris", so when I found myself in Mestre for the first time, it came as no surprise to me that right next door to my "gruppo sportivo" there was a "cannottieri".

Now I realize that I may be in some kind of trouble here for posting about the green and white boats in Mestre. after all, the Cannottieri Mestre and the GSVVM do have a rivalry.

It's not quite Lakers and Celtics, but there are Italian men participating in a sport and comparisons are inevitable.
You get the picture.

As with most rowing clubs, the Cannottieri Mestre has vessels representing the various traditional boats of Venice. And you may have already noticed, the club colors are green and white, and the clover or "club" (as in cards) holds a significance with them too.

Here are some shots of one of their gondolas, taken the day before Vogalonga. 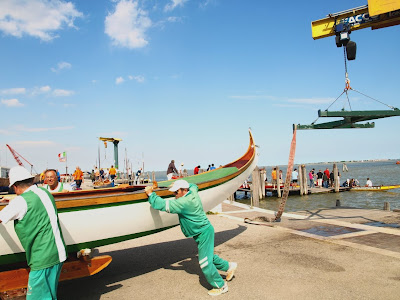 This was taken after the boat had been hoisted back out of the water and some club members were pushing her back towards their storage area. 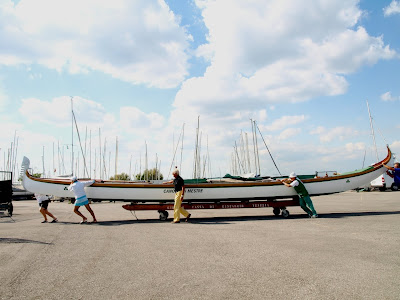 I know I've probably said it so many times that it echoes, but I'll say it again:
You can't really appreciate how long gondolas are until you get one out of the water.
The Cannottieri Mestre also has canoe and kayaking programs, english-style rowing (yes, the backwards kind), different types of sailing, and even tennis.
Check out their website at:
http://www.canottierimestre.it/
They're a great club, almost as nice as the GSVVM.
:o)
Posted by Gondola Greg at 2:12 AM