Posted by Gondola Greg at 1:28 AM No comments:

Posted by Gondola Greg at 1:35 PM No comments:

Posted by Gondola Greg at 1:31 AM No comments:

Posted by Gondola Greg at 11:30 PM No comments:

Posted by Gondola Greg at 11:57 PM No comments:

Bella and Luna - How It All Started 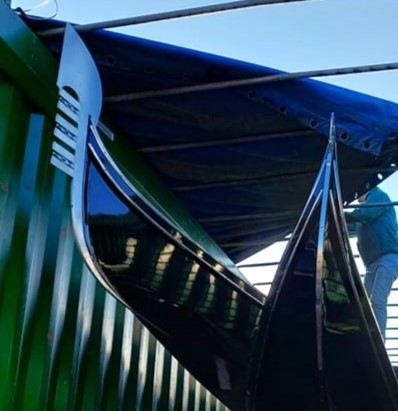 It all started with the Covid shutdown.
We were all affected by it.
For a while my gondola business was closed.
The gondoliers were understandably stir-crazy.
In fact many of us took boats out with our families
for exercise and sanity
(in fact we called them “sanity rows”).

As soon as we were able, our doors were open and we were taking passengers again.
We realized that what we offered was already socially distanced.
As it turned out, we were one of the only options out there.
For the first time in, well, ever…
we weren’t competing with:
Disneyland,
Knott’s Berry Farm,
Concert venues,
Night clubs,
And for a while, even dine-in restaurants.

As an employer I was thrilled that I could keep my staff working.

Towards the end of 2021 the accountant told us we needed to spend a bit on company supplies before the end of the year.
I reached out to my friend Saverio Pastor who carves oars and forcolas.

He agreed to begin carving ten stern oars for us, with the understanding that we would deal with the shipping question later when the oars were ready.
I asked him if he knew of anyone shipping any boats to the US (so I could have the oars included in that shipping), and he told me there were no containers heading in my direction.

Next Saverio told me that Roberto Dei Rossi (head of a gondola building operation) had some new gondolas that were near completion, but there wasn’t anyone in all of Venice who could buy them.
It seems that we weren’t the only ones quietly working during those strange times, but gondoliers in Venice weren’t so lucky. Tourism was down, and the guys who were working were not as busy as they’d need to be in order to afford new boats.
As you might imagine, the folks in Venice have a history with plagues and epidemics – they take such things quite seriously.

Saverio finished telling me about the new gondolas fro sale, and finished with “JUST THINK ABOUT IT GREG”

So my wife and I thought about it.

We thought about it a LOT.

We thought about how there’s typically a 3-5 year waiting list to get a new gondola,
about how rare an opportunity this was,
and about how if we were to sell a few of our older motorized gondolas, and move some things around, we might just be able to afford it.

More than anything though,
we thought about how we would probably always regret it if we didn’t try to seize this opportunity.

At that point the boats were about 90% complete.
Here are a few images we received from Roberto's shop when we first learned about the boats.
And yes, they definitely helped us make our decision. 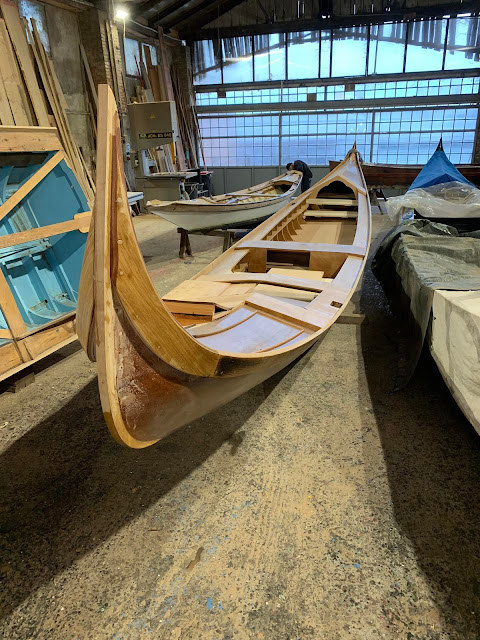 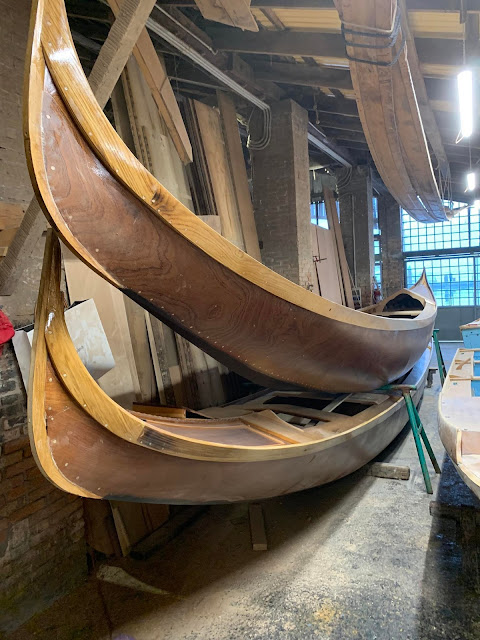 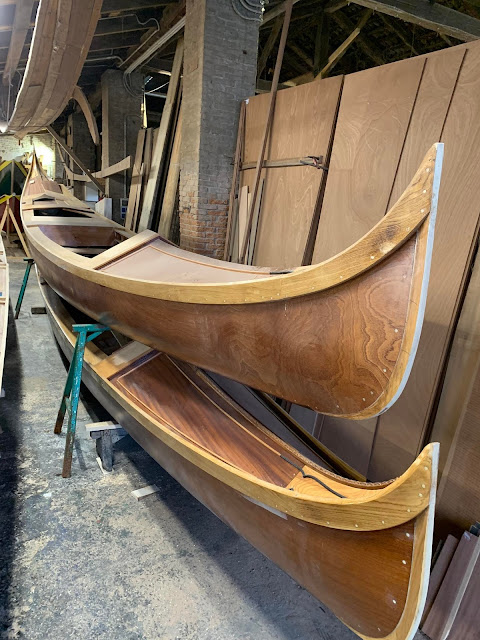 Belts were tightened, loans were taken,
money transfers were made…
And two brand new gondolas were paid for.

Roberto and I corresponded about various details:
What kind of ferros?
What color floorboards and seats?
Which cavalli we wanted (the brass horses on the rails)
And what custom carvings we wanted.

Our order with Saverio scaled up to include two more stern oars,
two forward oars,
and of course two stern forcolas and two forward forcolas.

I cannot overemphasize how gracious and patient Saverio and Roberto were with us, and with the whole process – which was done between two continents and two languages.

Both gentlemen, and their highly skilled staff are some of the best ambassadors that Venezia could ever have.

The master craftsmen in both workshops labored hard to get everything complete.
Next we received some fresh images...of freshly-painted beautiful gondolas, out in front of Roberto's shop. 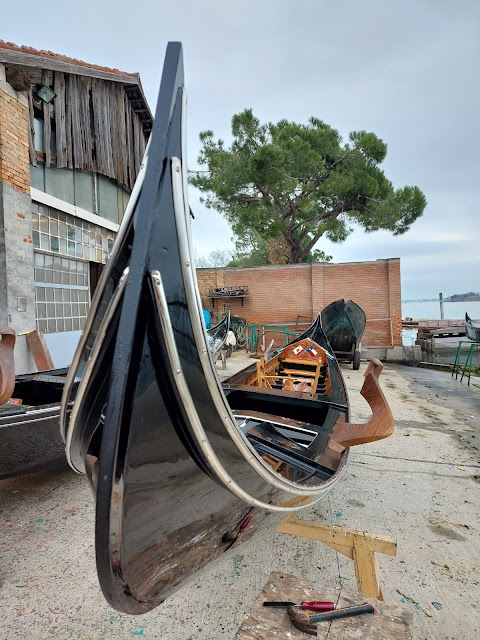 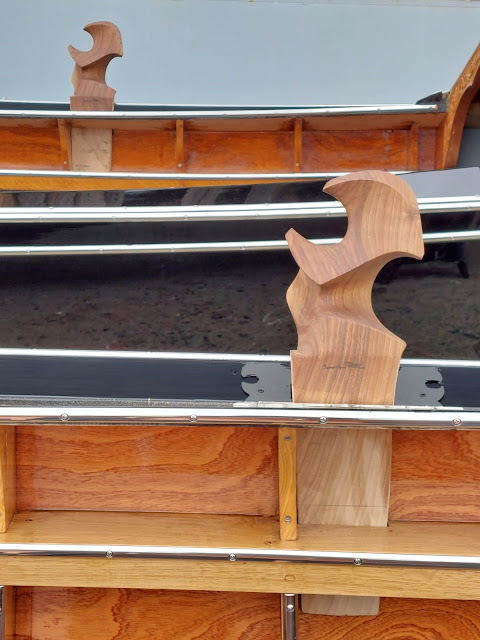 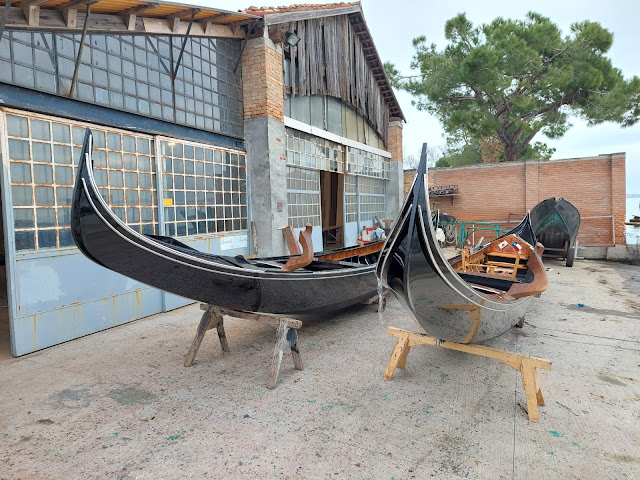 In the next phase I was emailing back and forth with Luca Niero of Cutter SAS – hashing out the details of how the two elegant crescent-shaped beauties would be shipped to Newport Beach.

I’d seen this before when Tim and Tyson had two gondolas shipped from Venice back in May of 2008.
(see Two New Sunset Gondolas – Container)

And when I received photos from Saverio of the two gondolas nestled into their container, it was a very similar packing arrangement – with one on the floor with tires under the ends, and the other just above her, resting on large sawhorses. 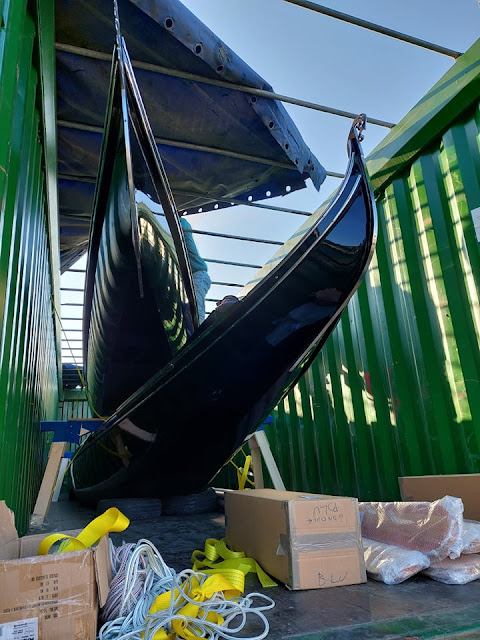 Because both ends of the boats rise up so high, the two were placed in an “X” arrangement so the rising tips wouldn’t touch each other during the voyage. 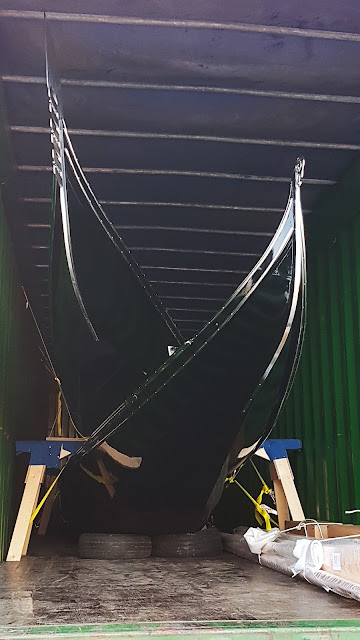 And WHAT A VOYAGE it turned out to be. 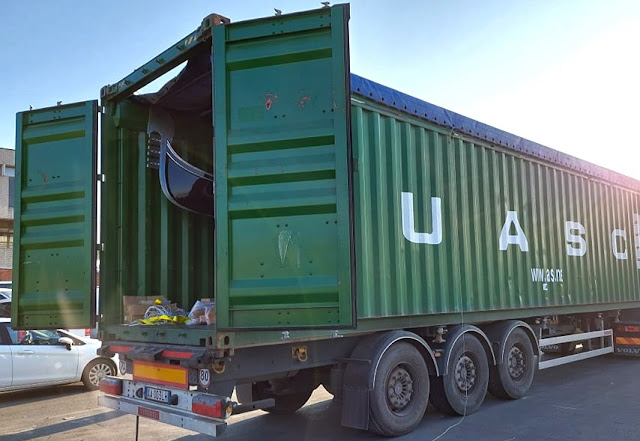 The gondolas were loaded into their container in the Veneto, but then it was trucked across the top of the boot of Italy to the port city of Genoa, where the container was loaded onto a large cargo vessel.
Luca and the folks at Cutter SAS provided us with web-based information as to the location of the ship, and we followed it’s progress.
The ship called at some other ports in southern Europe before crossing the Atlantic.  She docked in Cartahegna, Colombia, and our container was offloaded there.
For the next three weeks it sat there.  My imagination was out of control.  Because the container was an “open-topped” model, with a tarp tied down over the top, I wondered if anyone was investigating it, plundering it, stashing contraband in it, flying in and laying eggs in it.
For all I knew, our container might arrive with a family of wild parrots living inside, or with two feet of tropical rainwater sloshing around inside.
The imagination can sometimes really cause problems.

Eventually we were notified that the container was on another cargo ship and heading up the west coast of Central America.

By the time the ship docked in Long Beach, our gondolas had been almost three months in transit.

Kyle and Kalev - Coming and Going 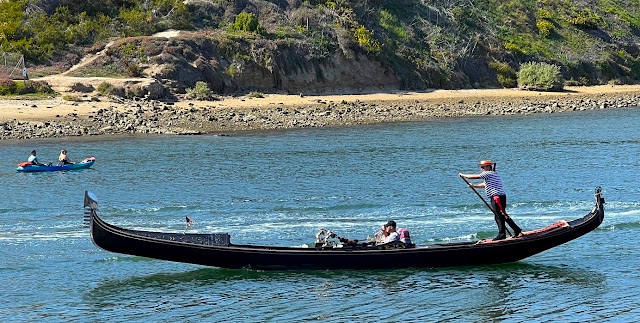 This past weekend our weather in Newport was remarkable, and our gondoliers and their passengers enjoyed it.
Here we see gondolier Kyle Wolting heading out on a glistening later afternoon. 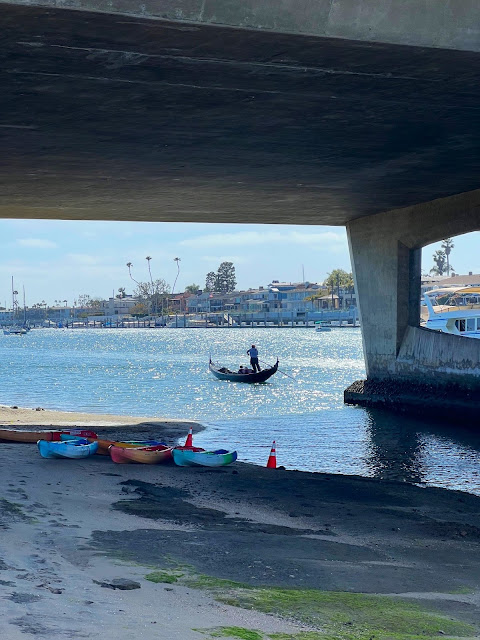 And later on he returned under golden sunlight. 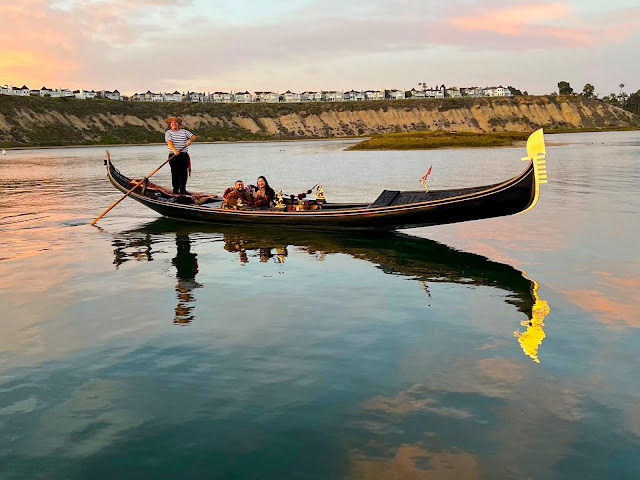 Meanwhile Kalev navigated wind and water with the canopy on the legendary gondola "Lucia". 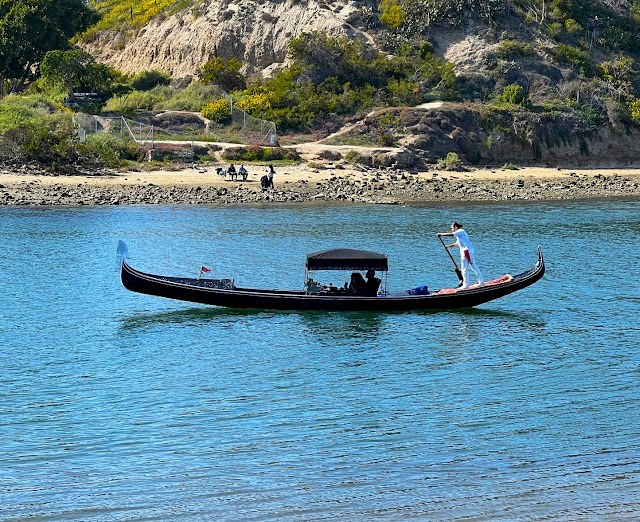 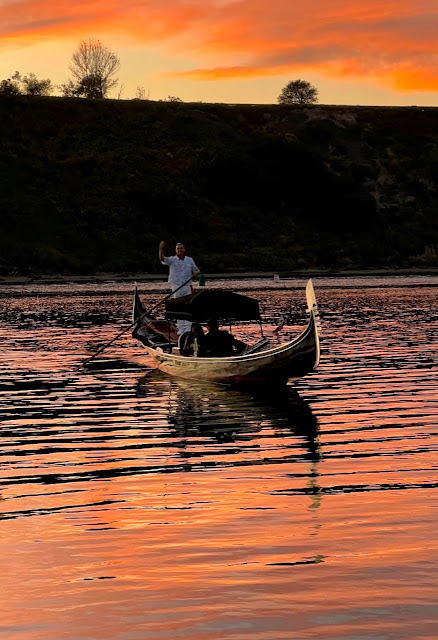 It's cruises like this where our clients don't want to
get out of the gondola.

Can't say I blame them. 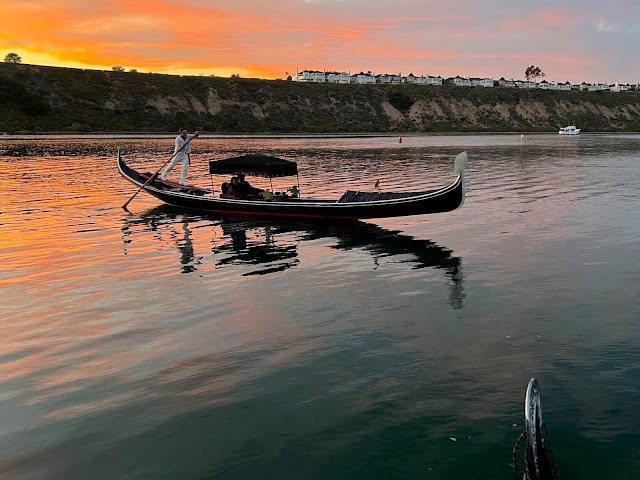 Posted by Gondola Greg at 2:00 AM No comments:

Building Up to V-Day 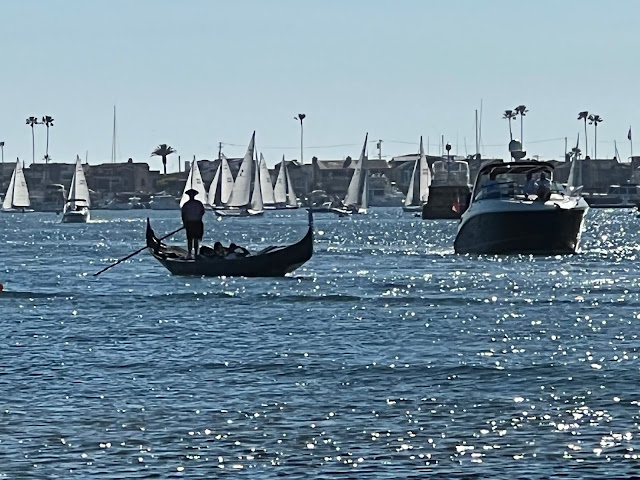 Every year we spend a lot of time worrying about what the weather will look like on February 14th and the days leading up to it.
Some years it's dismal.
Some years it's something we can work with.
This year in Newport, the forecast is SO good,
I'm wondering where the hidden camera is.

I should apologize to my friends who live in places where there's snow.
But believe me folks, we pay for this weather dearly:
in taxes, and traffic, and governmental nonsense.
Don't even ASK me about gas prices.

And yet, for the last week or so,
I have witnessed several of our gondoliers out rowing in February...in shorts!
So at this point I'm getting an idea of what V-day must be like for my friends in Australia.

Here is a collection of shots I took from the docks as some of the gondoliers passed by. 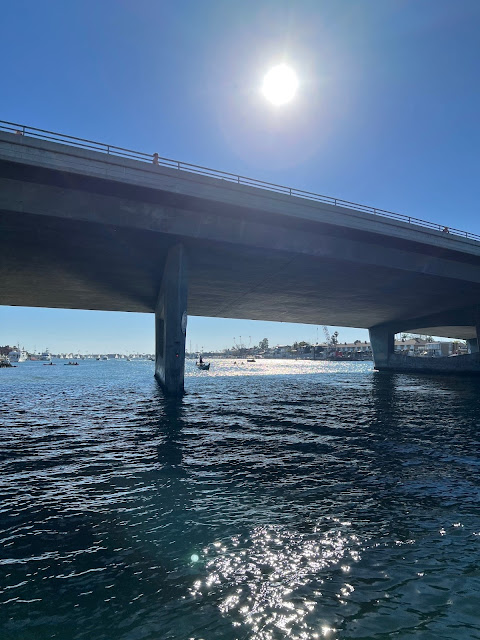 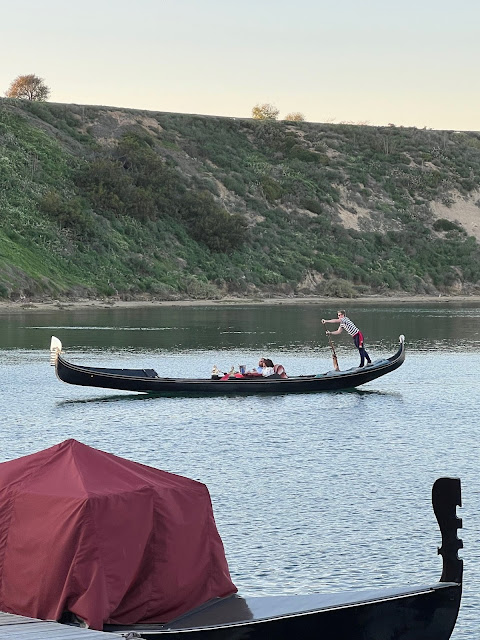 Brooks heads out with a happy couple. 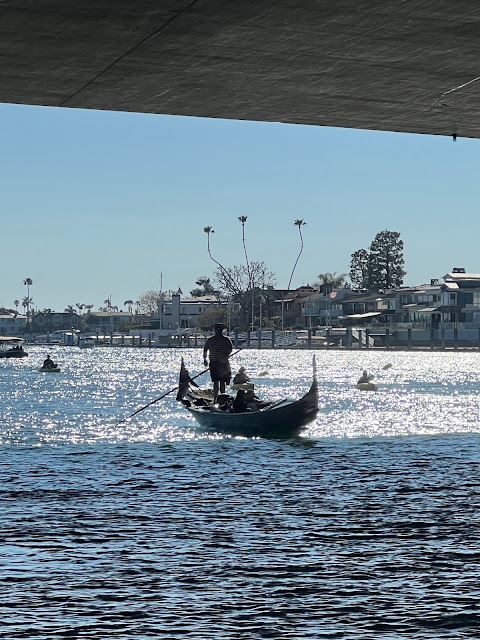 Kyle rows in shorts in the sunshine. 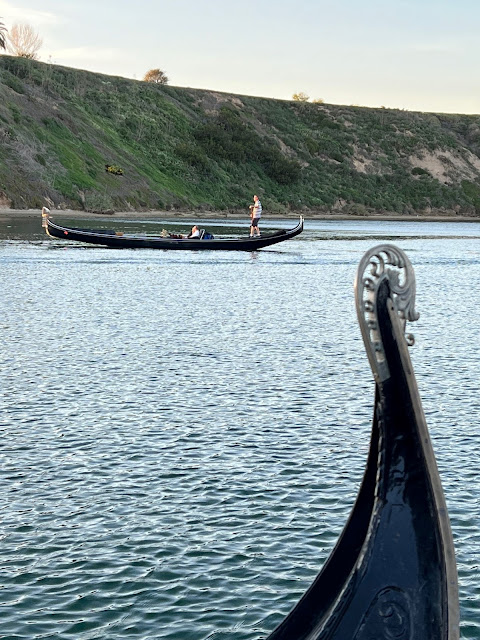 Roberto sports the shorts too. 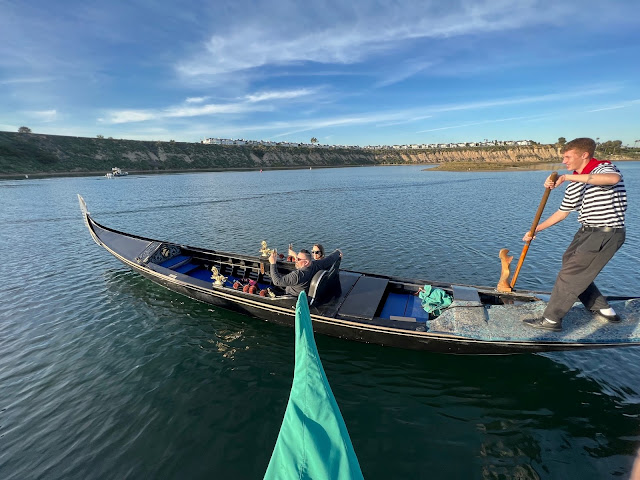 Harry departs as his passengers raise a toast. 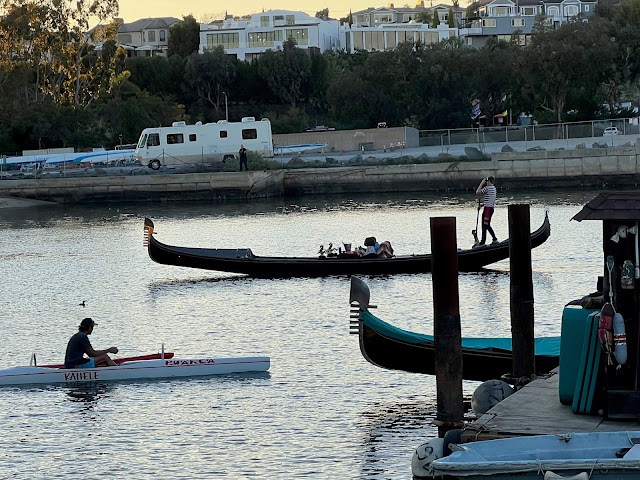 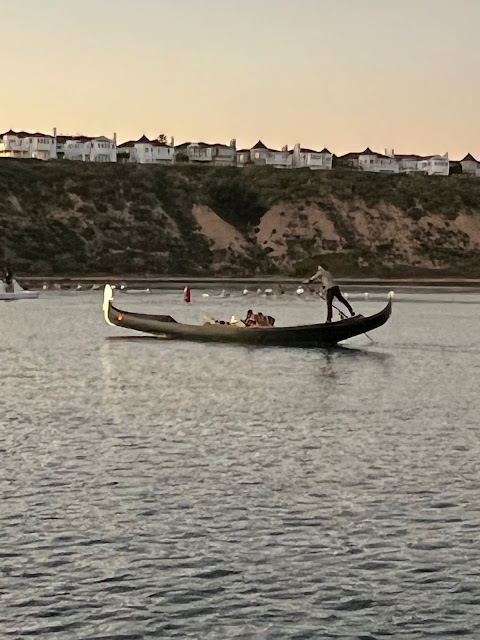 Mike Ruffino glides along as local rowing teams
practice in the distance. 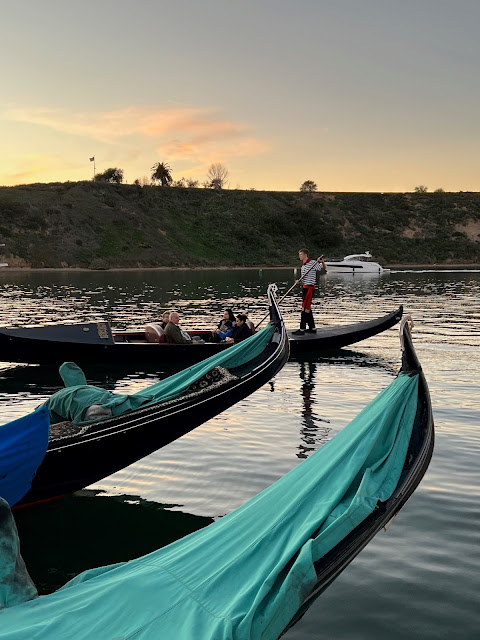 Coming back with a happy family on board.
Posted by Gondola Greg at 1:02 AM 1 comment: 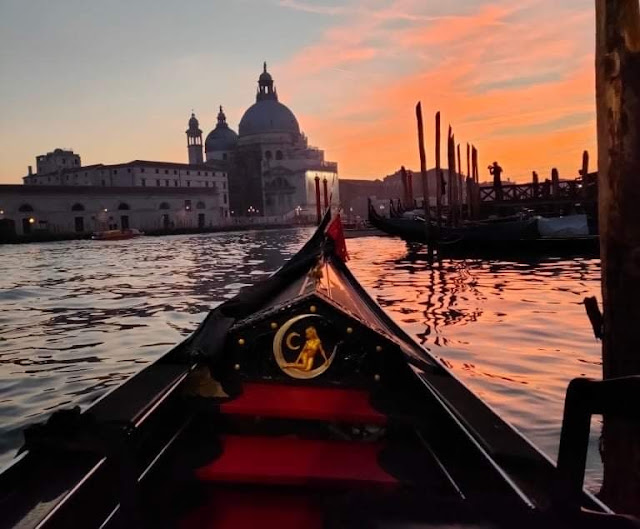 (Truth is, they never seem to get old)

My friend Alessandro sent me this great photo of a brilliant sunset in Venezia, with the iconic dome of the basilica di Santa Maria della Salute in the background.

Big thanks to Alessandro for taking my desire to get to Venice...
and turbocharging it!

Posted by Gondola Greg at 11:58 PM No comments: