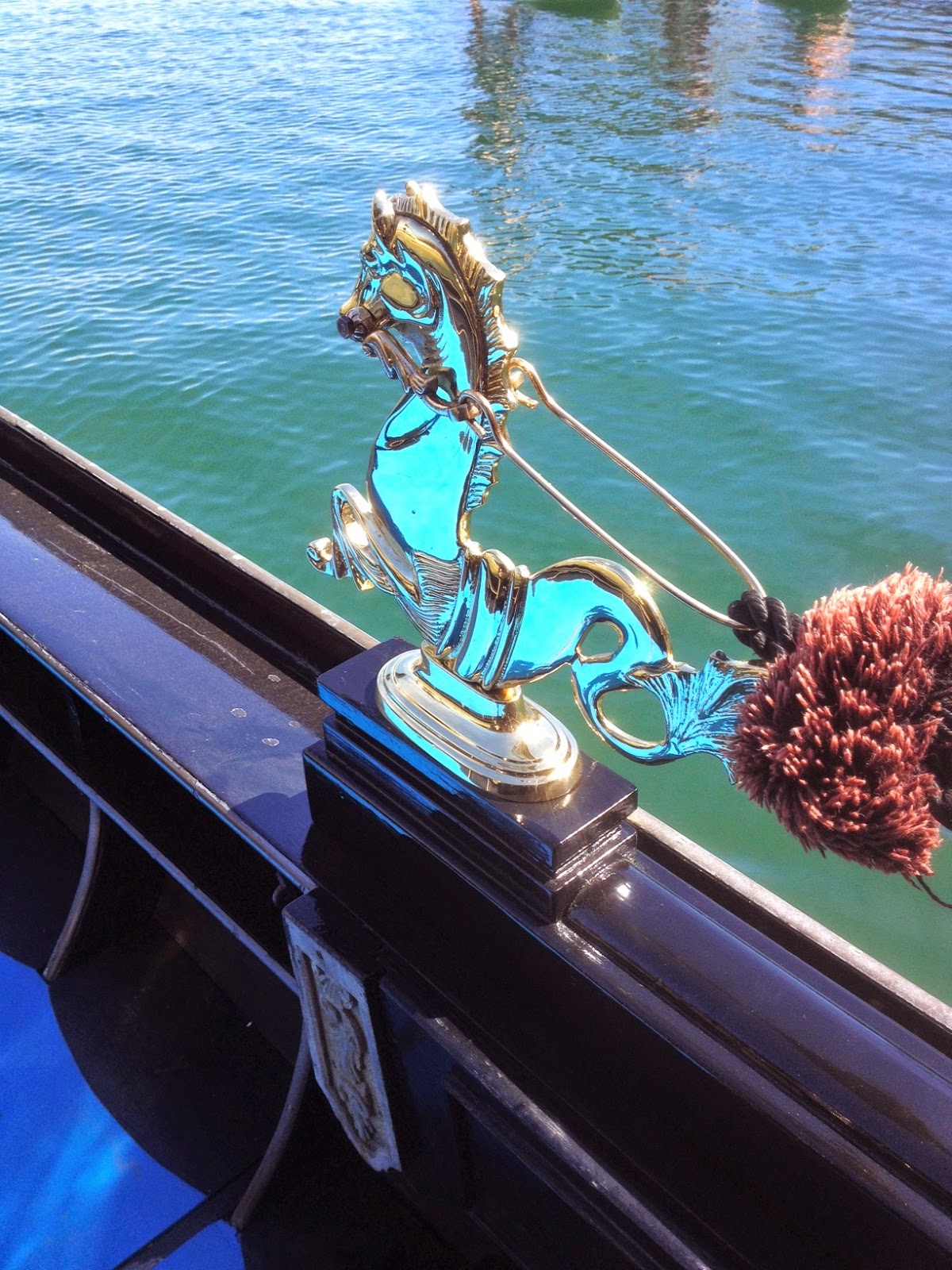 The other day I was on a training row with a guy, who had gotten to
the point where I could just sit in the passenger seat and relax.
As we came out from under the Newport Boulevard bridge,
with the sun high in the sky, I noticed that the light blue floorboards
of my gondola The Phoenix were getting direct sunlight - which was then reflecting off of the polished brass cavallo.

The end result made for an unusual photo - "sky blue cavallo".
Posted by Gondola Greg at 11:30 PM No comments: 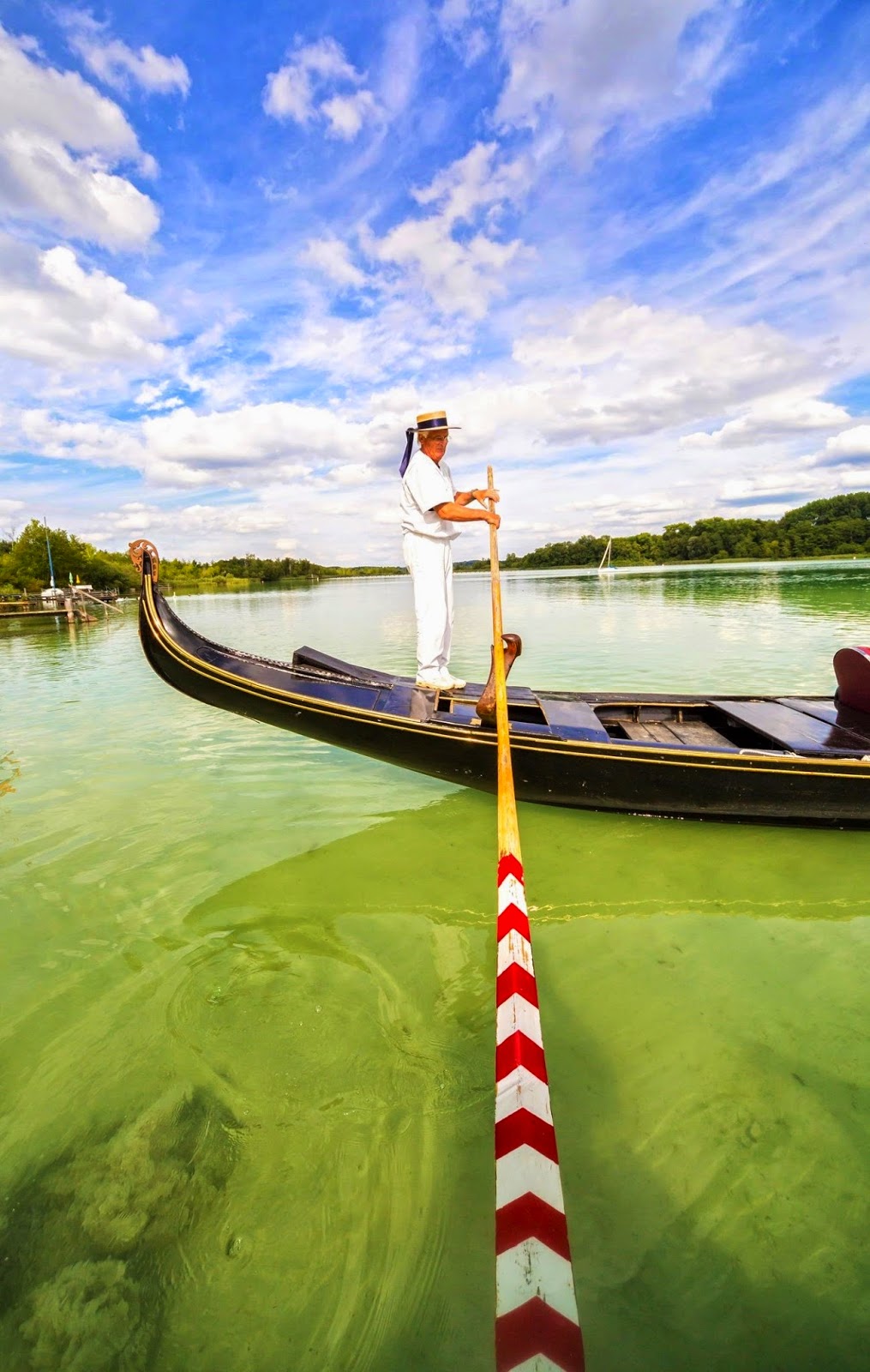 My dear friend Ingo in southern Germany sent me these fantastic pics
from his location in Wörthsee - a lake Bavaria.

Seems to me that not only do they have some of the very best beer in the
world in Bavaria, if you believe the camera lens, they also have one of the longest gondolas!

Now, I know that they have seasons in Germany, and my guess is that it's
still a bit brisk right now in Bavaria, but I must point out that Wörthsee looks absolutely idyllic in these images.


When I get out there, I think I'll break out my tape measure
and see just how long that gondola really is! 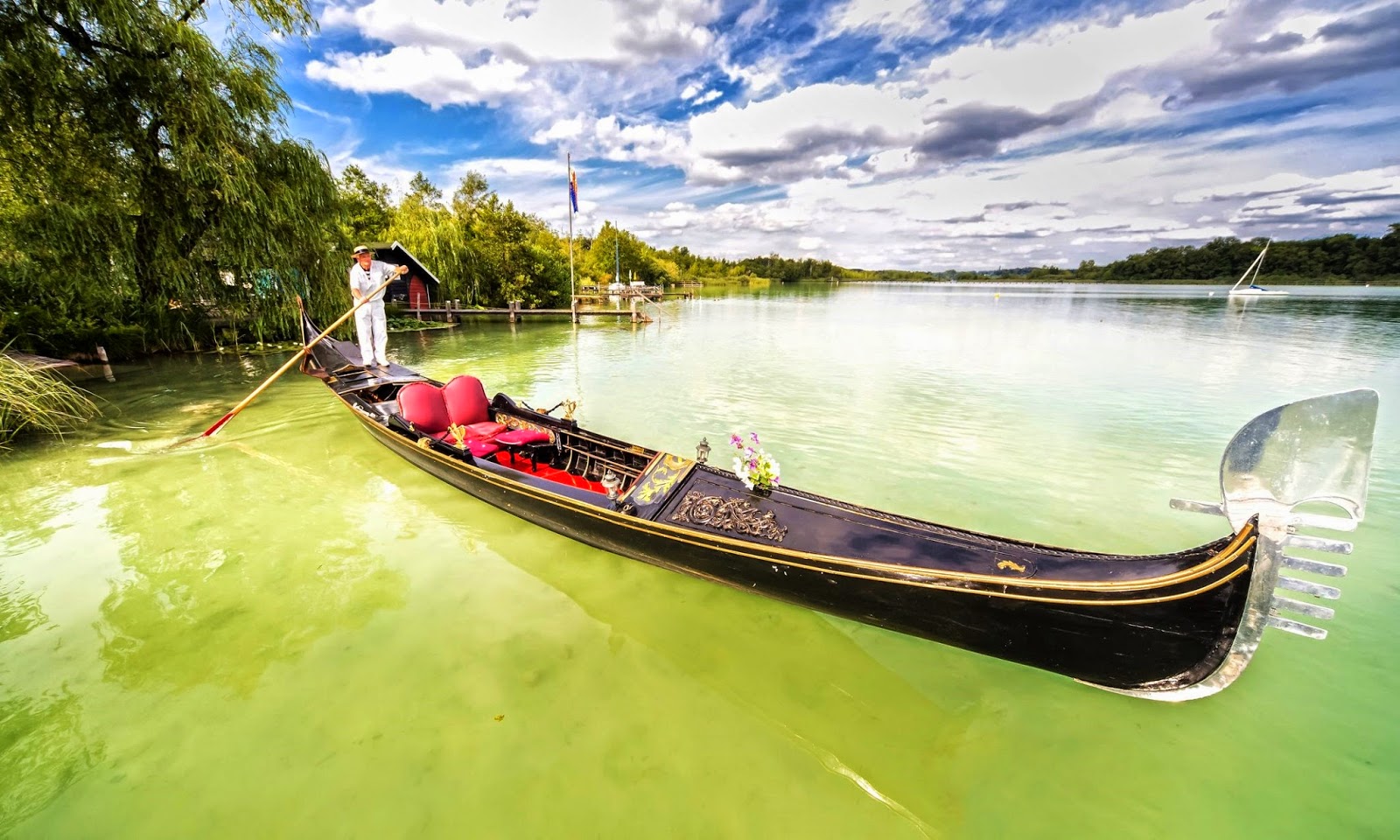 To learn more about Ingo's gondola, go to:

www.gondola-viaggiante.de
Posted by Gondola Greg at 2:32 AM No comments: 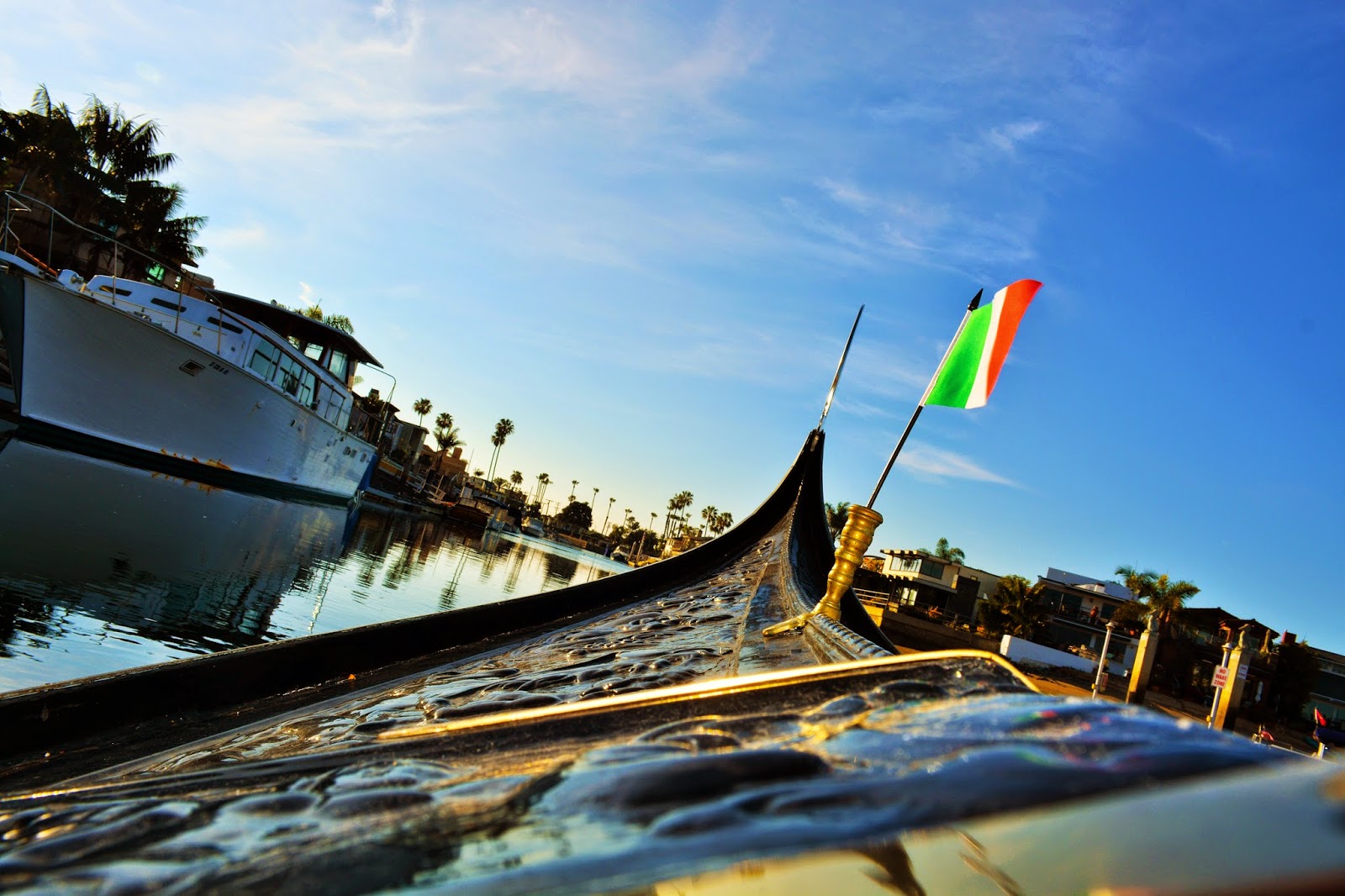 Posted by Gondola Greg at 3:31 AM No comments:

"Point of View" in San Francisco 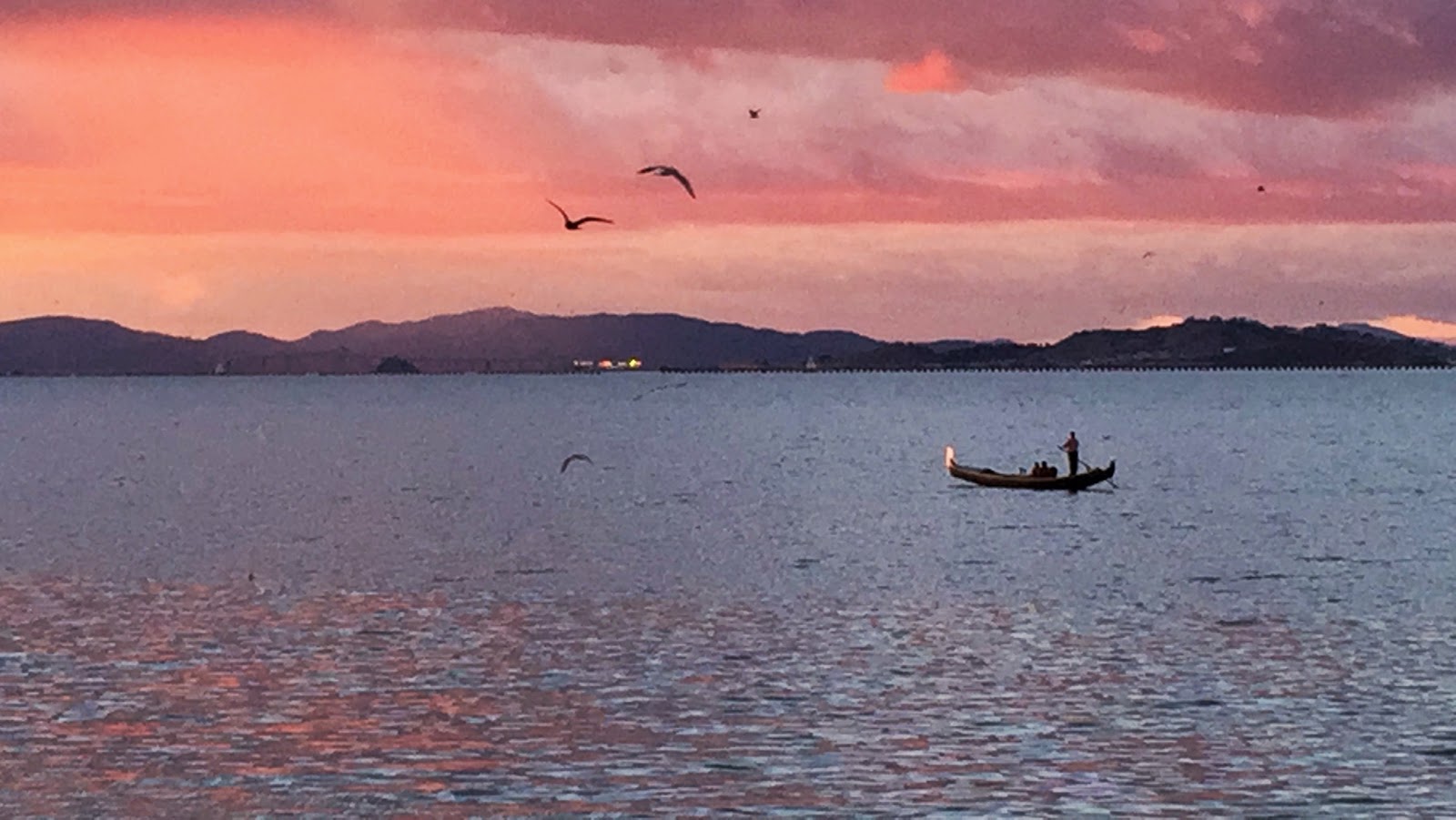 Following up on the Angel Island post, Scott Davies in San Francisco sent me this photo today along with the following text:


As I was out rowing the other afternoon, I had a conversation with a woman from the neighborhood who was walking along the seawall.

She had taken a very nice picture of the gondola about two weeks prior and wanted to send it to me.
So while my friends were taking the picture from your post of Angel Island (March 2),
at the same time,  she had her own beautiful point of view.
That is Angel Island on the left, Mt. Tamalpais to the right of that with the Richmond-San Rafael Bridge between the two.
So when people look at me kind of funny when I tell them that I am a gondolier, I can't help but think who would not want to be a gondolier.
I guess it is your point of view.
Indeed it is, and as gondoliers, we sure do have a great point of view.
Posted by Gondola Greg at 1:14 AM No comments: 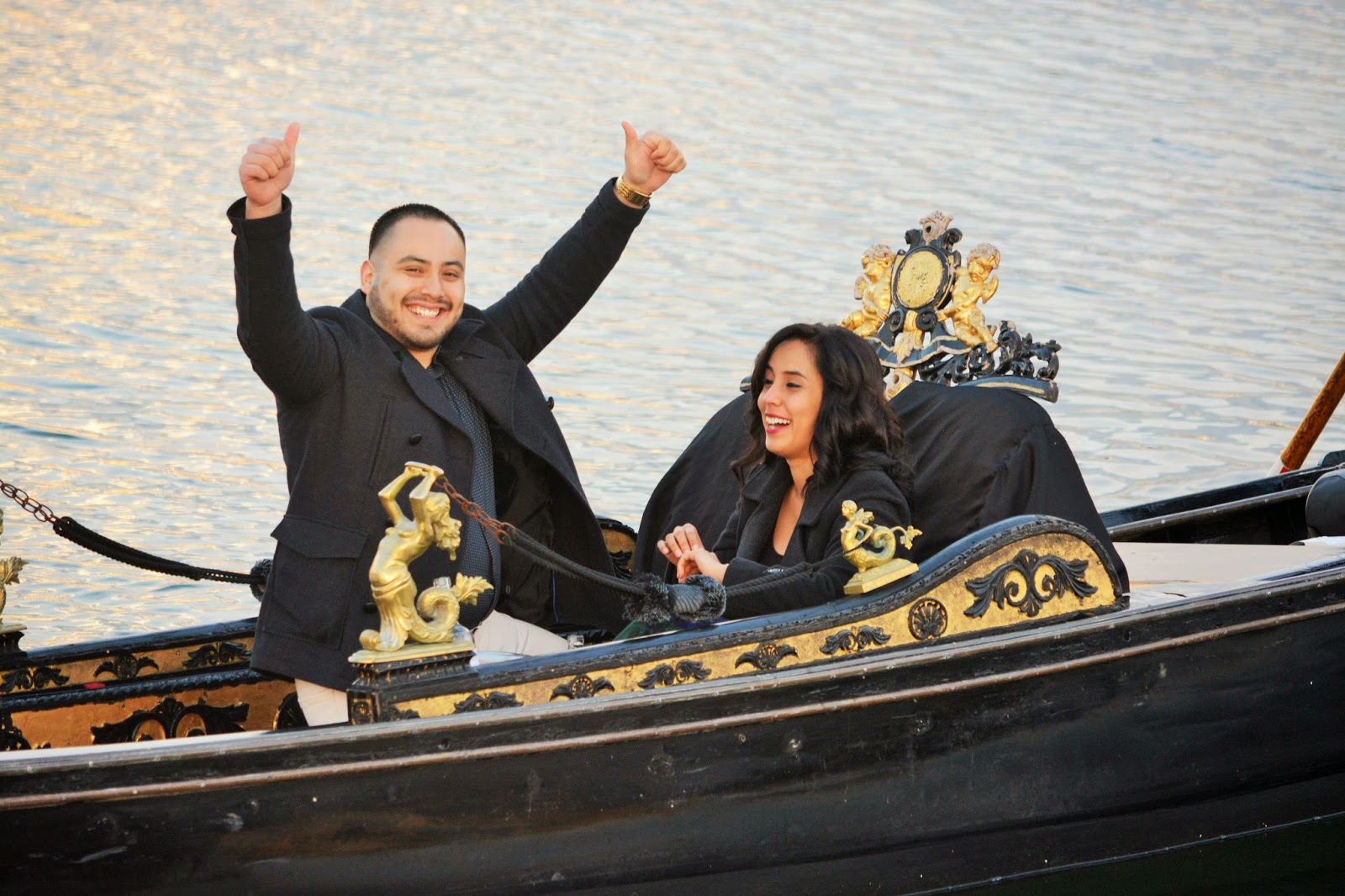 The photographer was in place,
the lady fished a bottle out of the water,
there was a message in it,
while she was reading the message, he pulled out a ring...
and proposed.
She said "yes".

Moments later we got the "two thumbs-up".

Another happy couple.
Another great memory.
Posted by Gondola Greg at 11:00 PM No comments:

Moments Before the Proposal... 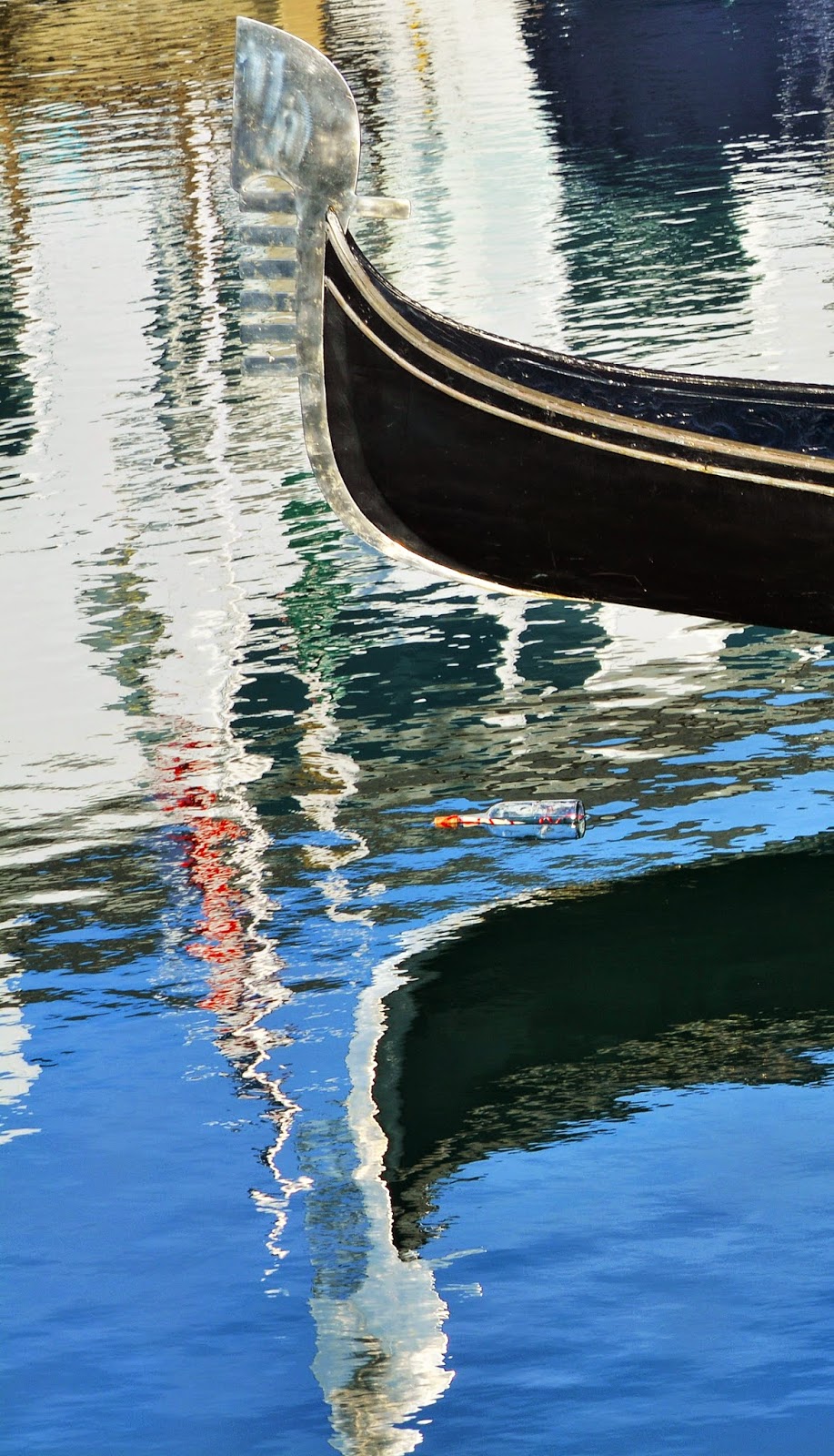 Here we see a message in a bottle, artfully captured between the bow and the reflection of the bow of the Wedding Gondola in Newport as gondolier Jakob Easton lined up for the lady in the boat to retrieve the bottle.

Not long after, the gentleman seated next to her presented a ring,
"popped the question", and the rest, for that couple, is history.
Posted by Gondola Greg at 11:00 PM No comments: 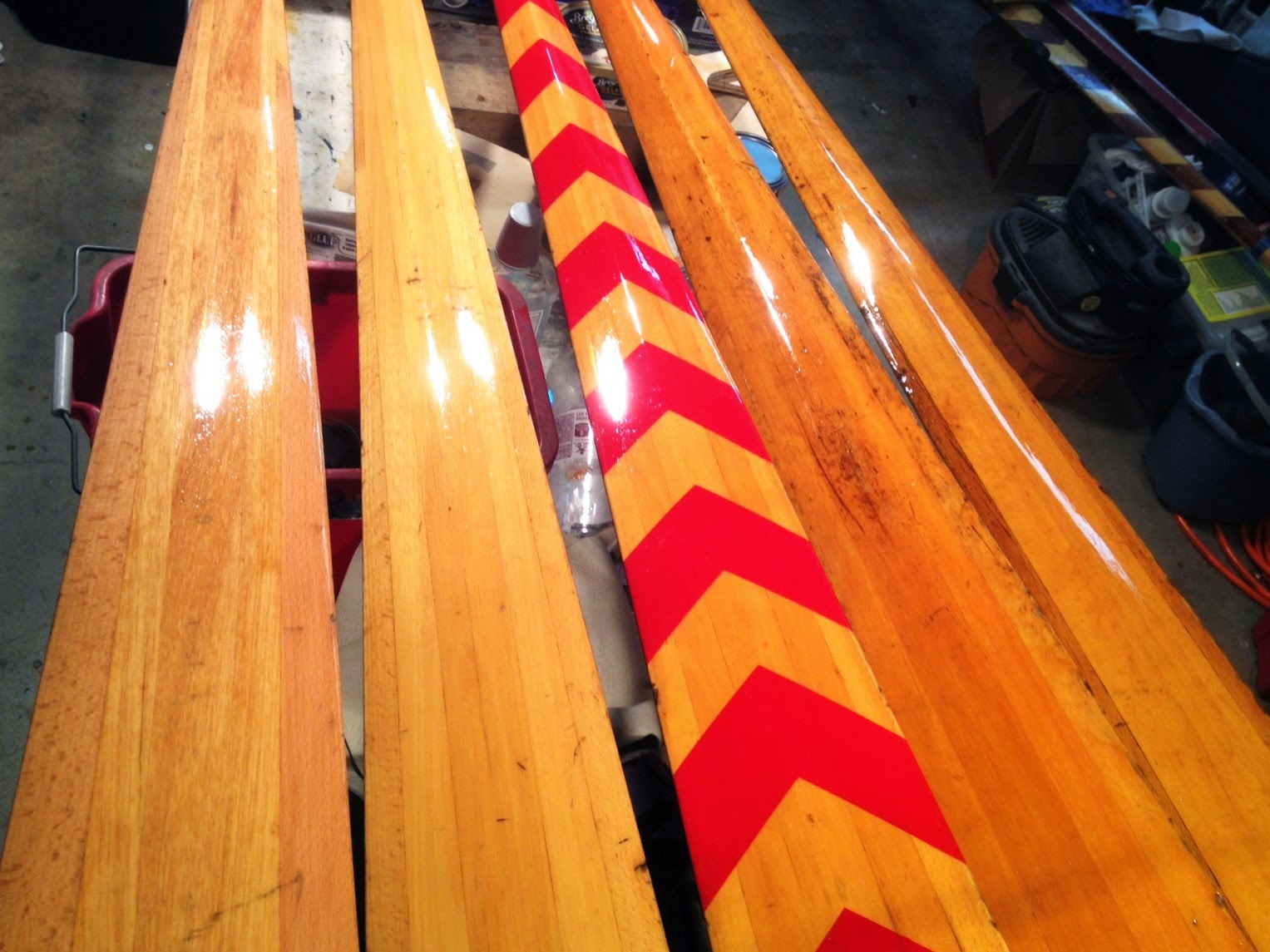 I love working with paint and varnish.
Fortunately I've never had any problems with the fumes I work with,
but I can't say the same for my beloved wife.
Fans, closed doors, and all other efforts have not fixed the problem.
If I'm brushing something in the garage, it's not long before it
gives my wife a headache and triggers her asthma,
as she sits at her computer in the next room.

Now, I do love my wife more than painting and varnishing,
but the work still needs to be done, and I'm pretty good at it,
so over the years I've tried using more fans, kept the door to the garage
closed, and even stuffed a towel into the space beneath the door.
Eventually, however, the fumes get through and she's miserable.

My wife is not a lightweight.
She just has issues with these particular fumes.
I could point fingers and complain, but then anyone who accompanies me
to the grocery store would see the depth of my hypocrisy as I coughed
and gagged my way down the place I call "the stinky aisle" - that's where
they keep all the laundry detergents and fabric softeners.
The place kills me.

Like I said, I'm lucky that the paint and varnish products I use don't
bother me, 'cause laundry detergent sure does, and vinegar is my
complete and total kryptonite!

The struggle continues.
The work still needs to be done.
I can't just farm it out to some woodshop and pay top dollar for work
that I can do at home for the cost of the varnish and thinner.

I line up the next batch of remi that need varnish, and discover that I'm
out of my normal varnish.  The backup brand is also not present on my shelf.
I look further and discover the cans of Dutch varnish and thinner made by Epiphanes.
Months ago I found them for a good price and have been saving them for whatever "special project" might require such a high-line product.

I brush the Epiphanes varnish onto the freshly sanded oars,
Patsy Cline sings from the old tape player in my garage.
A fan blows over the surfaces that I'm varnishing,
and then...my wife opens the door to the garage.
She props the door open, asks me a question, and leaves it open!
It's quite possible that you don't understand just how amazing this single event was in our household.

Upon further investigation, I discovered that the Dutch varnish and thinner I was using, had no adverse affects on my wife's nose or head.
No asthma either!
Four days later she still had no complaints.
I spent a few hours in my garage tonight with brush in hand,
rejoicing in the fact that a simple change in product could solve my problem
(and I get to keep my wife!).

The Epiphanes varnish might cost more, but for me,
it's SO worth it!

Posted by Gondola Greg at 1:55 AM No comments: 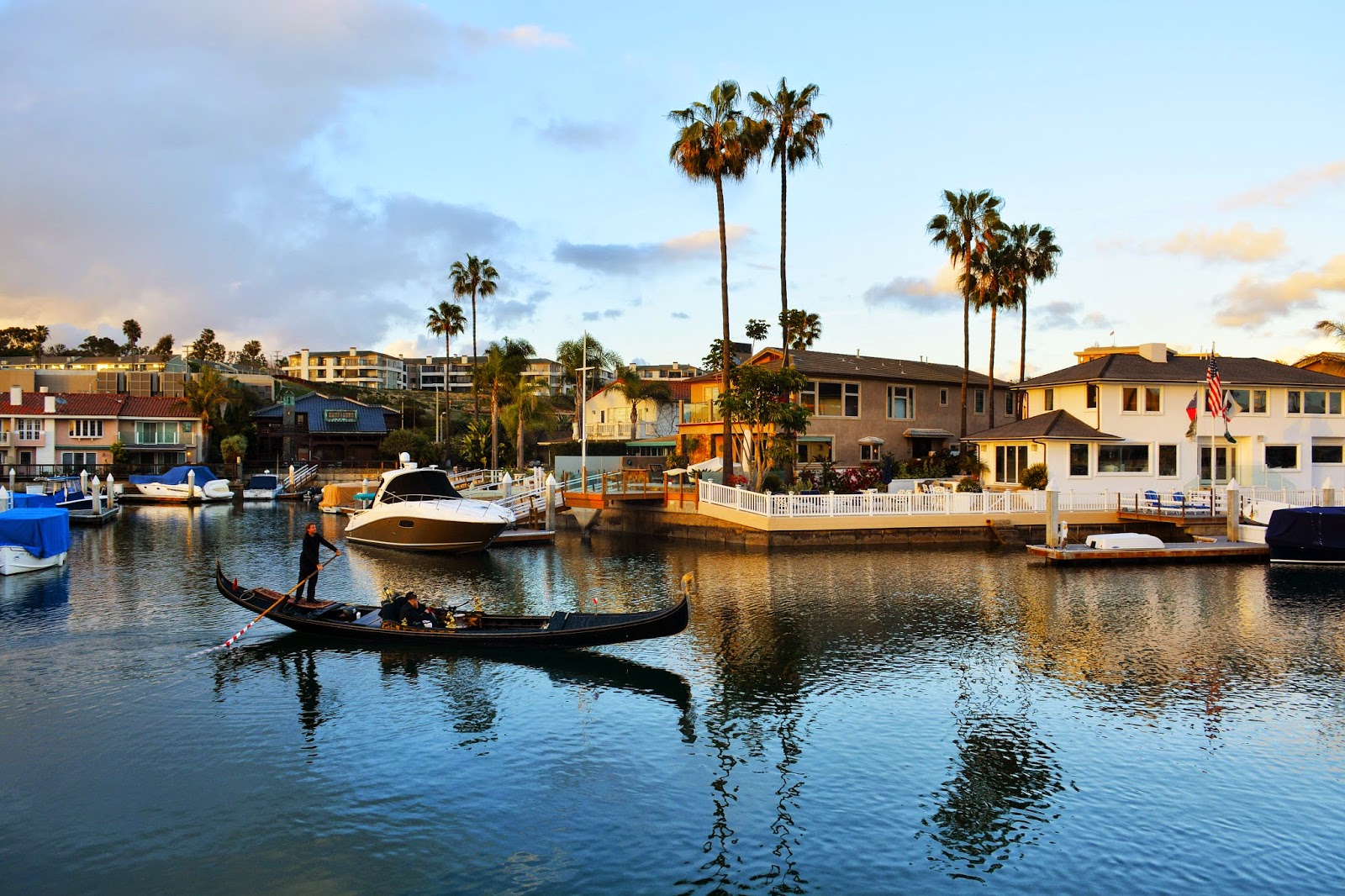 In the early evening of February 28th, this shot was taken moments
before the gentleman presented his lady with a ring and proposed.
She said "yes", of course, and it was perfect.
Posted by Gondola Greg at 10:34 PM No comments:

The View of Angel Island 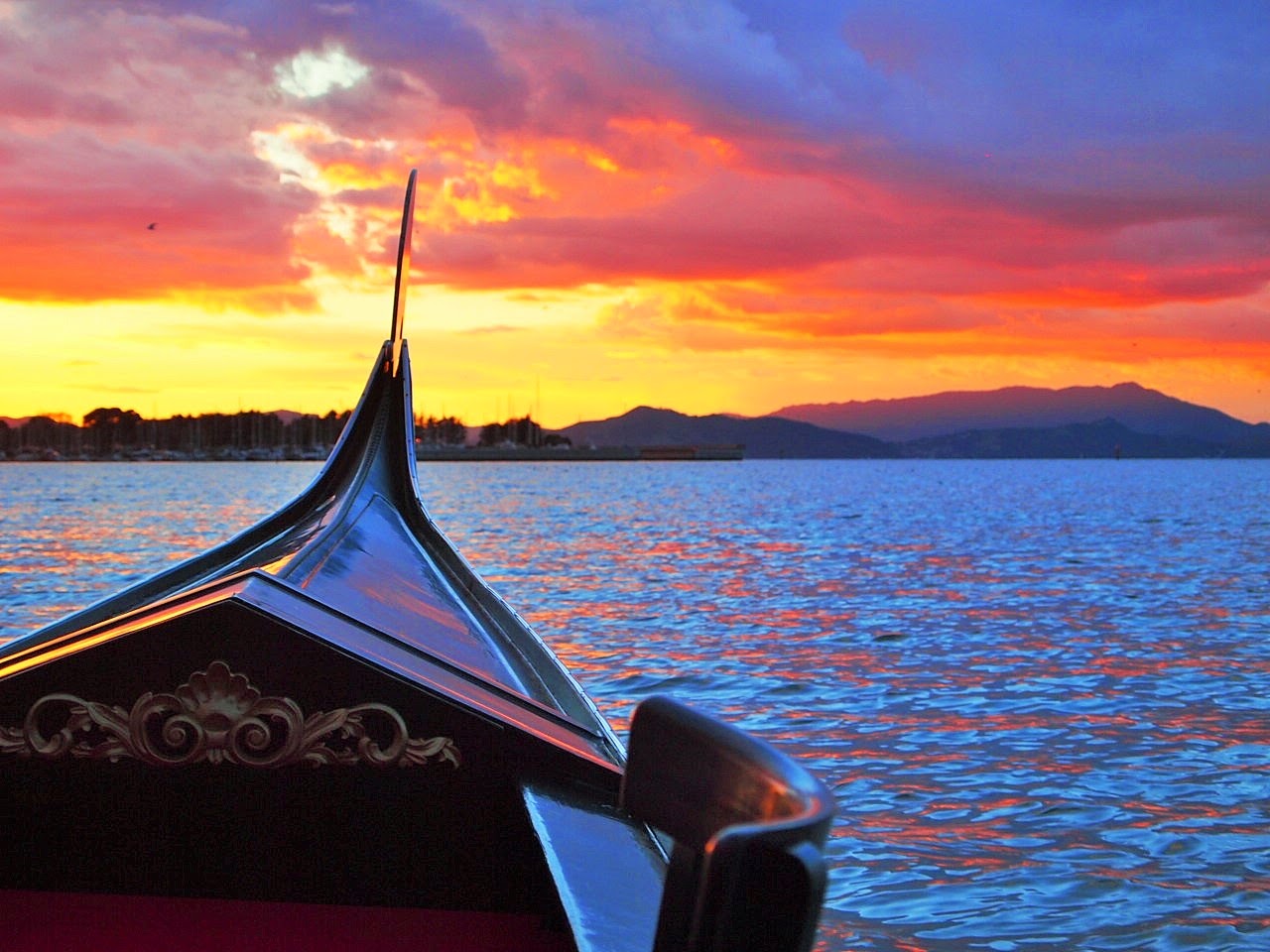 Scott Davies, who recently splashed a gondola in the San Francisco Bay,
sent me this nice jealousy-inspiring photo, along with the following text:


Greg,
I had the pleasure of taking some friends of mine out on the gondola for a sunset cruise on Saturday evening.
That is Angel Island in San Francisco Bay just to the right of the ferro, with Mt. Tamalpais to the right of that.
The Golden Gate Bridge is just outside the frame to the left.
A beautiful evening to be out on the water.
I hope all is well.
Scott
Posted by Gondola Greg at 11:25 PM No comments:

Enjoy her post at:
“In Memoriam - The Steaming Lady”