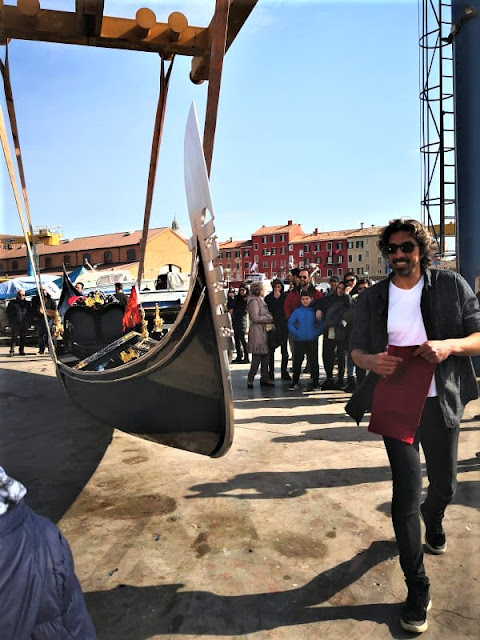 I first met Alessandro Santini here in California.
He and his wife Roberta were vacationing with their kids in August of 2018.  In between family surf sessions and sightseeing,
we had tacos and talked about gondolas.

He told me about the boat he was having built and I pretty much begged him to send me photos of the varo (a ceremonial launching party in Venice).
I had hoped to get to Venice in time to attend the varo,
but it was not meant to be.

A career gondolier in Venezia, Alessandro had the boat custom built.
He chose the famous Venetian regata-winner-turned-boatbuilder Franco Crea. 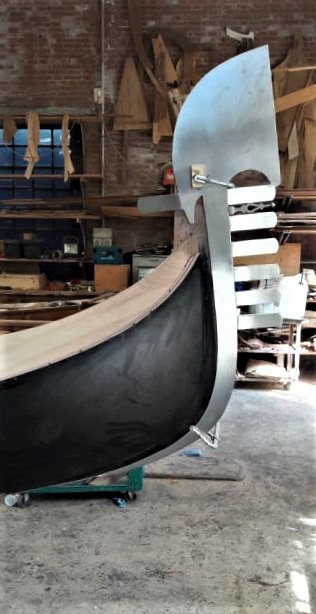 There are only a handful of outfits producing gondolas in La Serenissima these days, and Crea is by far the most prolific.  He and his accomplished squerariolo Francesco began the process in July, and by late October she was complete - ready to kiss the waters of Venice.

But conditions weren't the best for a perfect new boat.
Strong scirocco winds, very high tides, and people away on holiday convinced Alessandro to wait for a better time with the right weather.
The perfect showpiece of a gondola waited patiently in Franco Crea's facility until the big day. 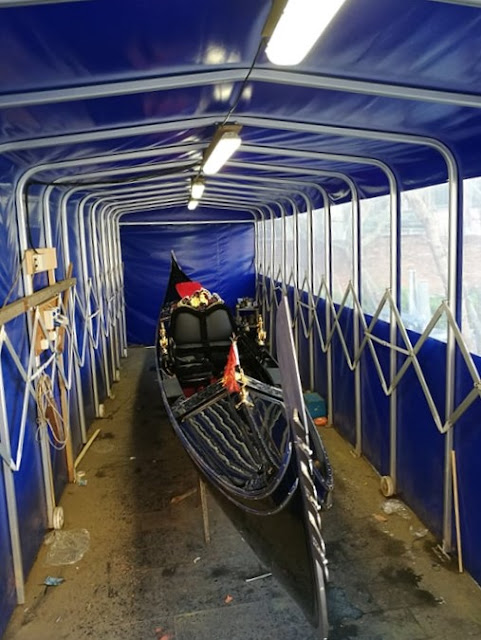 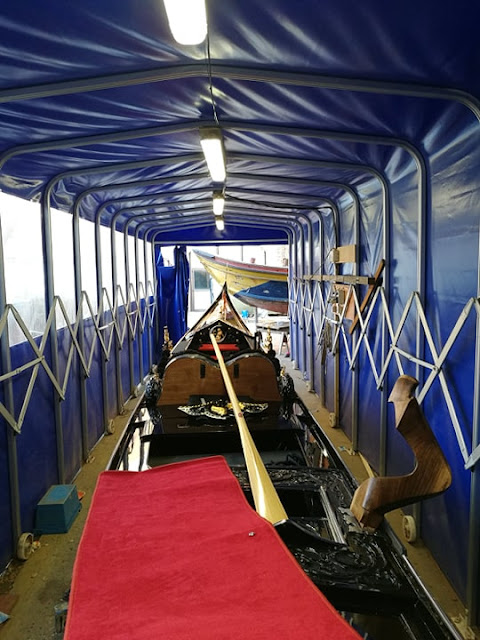 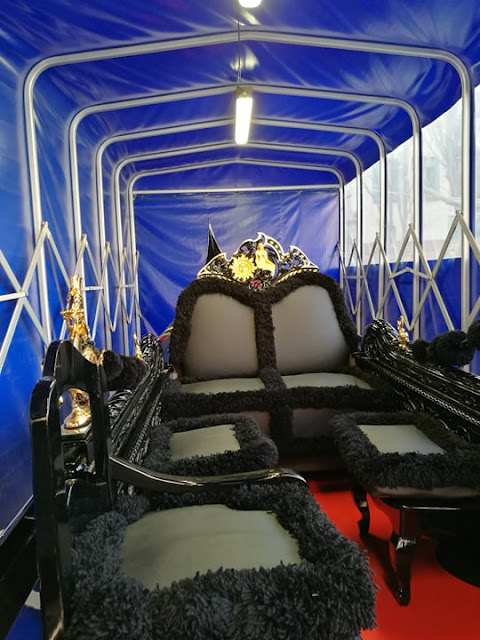 When you're an established gondolier, and you're having a boat built,
you have certain things custom-done according to your wishes.
Signore Santini arranged with the accomplished Venetian carver "Marzio" to design and create some remarkable pieces to serve as the portela in the front, and the scimier mounted atop the seat-back. 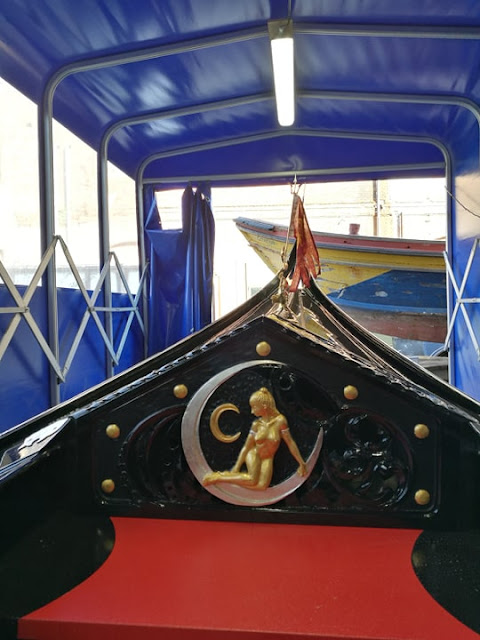 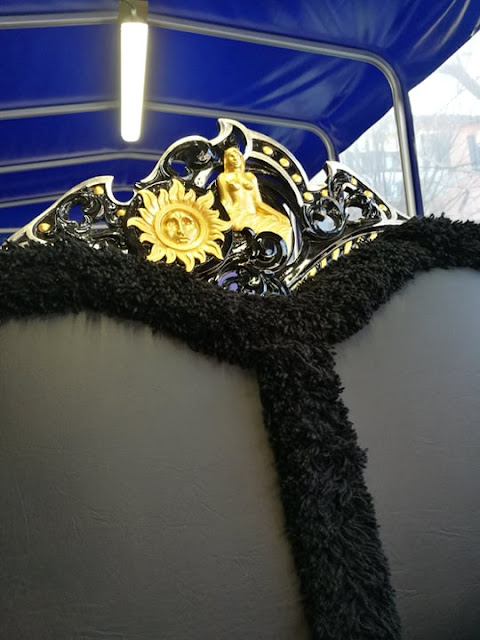 In addition, the pusioli (arm pieces) were custom carved, along with the decking areas in the stern around the forcola - complete with a flat charcoal black background to contrast the raised carvings. 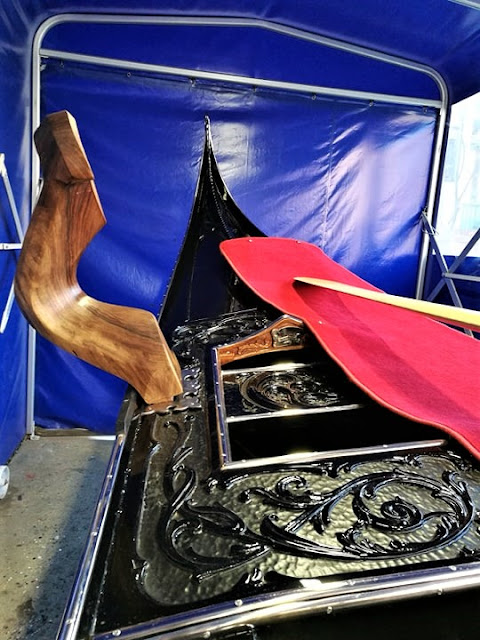 Throw on a regal red carpet for the gondolier to stand on, and remi and forcola from Saverio Pastor, and she was almost complete.
Santini didn't scrimp on the details though - he chose crown-adorned fully shaped cavalli on either side and a traditional "delfino" as his canon decoration on the bow - all in flawlessly bright polished brass.
The ferro is stainless steel with a brushed finish. 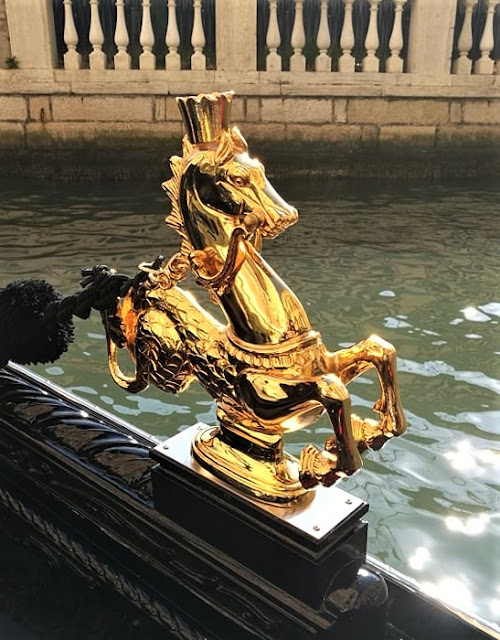 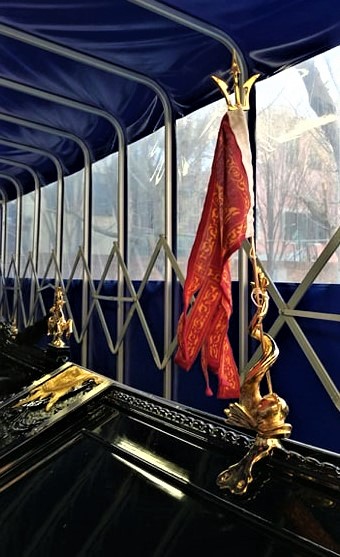 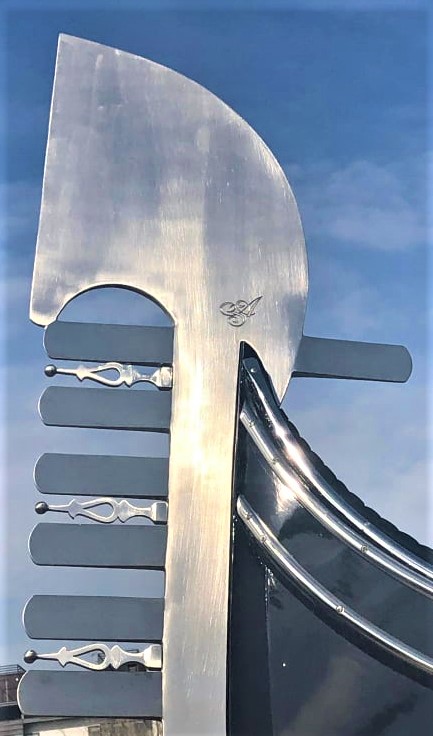 After more than eight months of building, finishing, and then waiting...
it was finally time - the right time for her varo.

Friends and family assembled outside the Crea facility,
and on a brilliant day in March, Alessandro rolled her out into the sun. 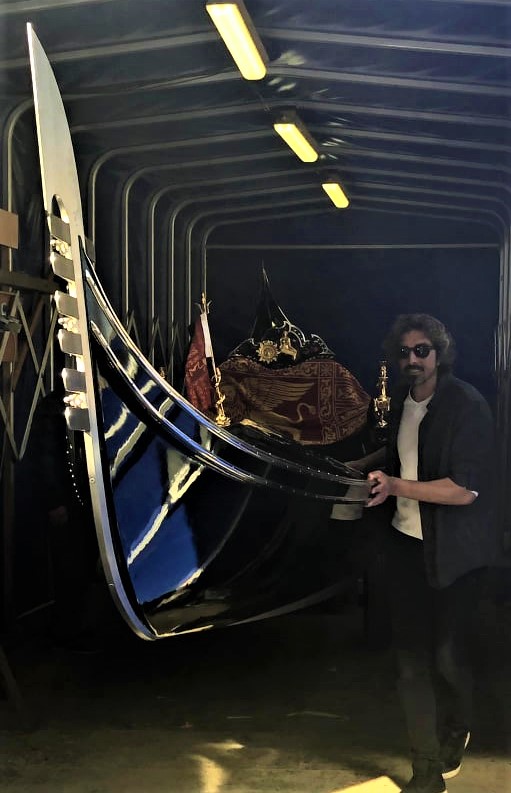 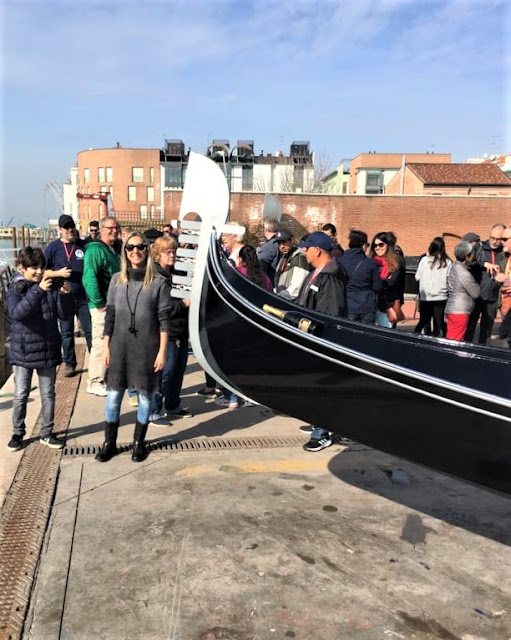 Alessandro's wife Roberta smiles for a shot with the new gondola. 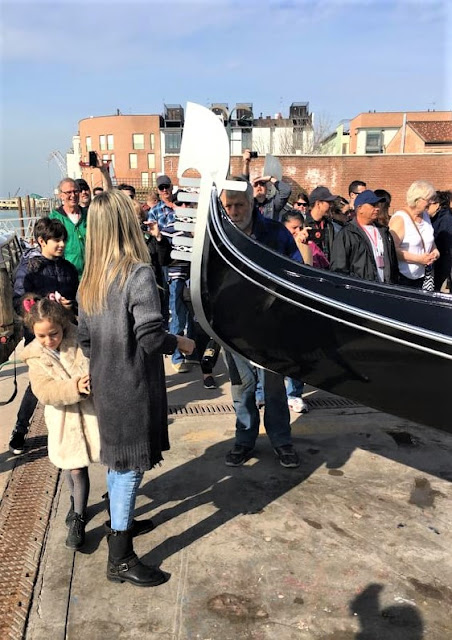 Maestro Crea himself talks about the boat. 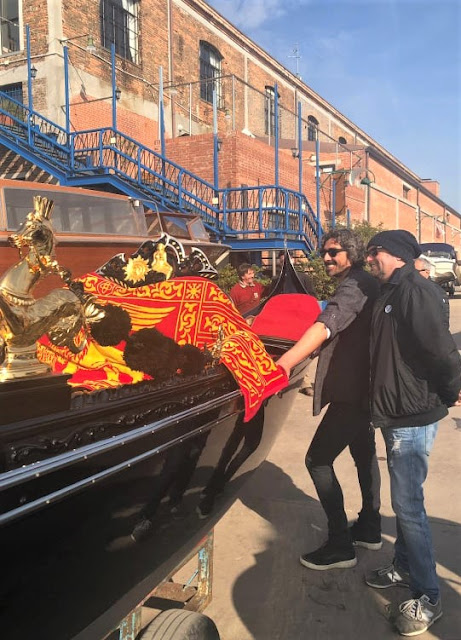 Signore Santini soaks up the moment with Matteo Sinibaldi -
a good friend and fellow gondolier.

The beautiful black boat was rolled into position for her christening.

And it was Roberta's duty to do the honors. 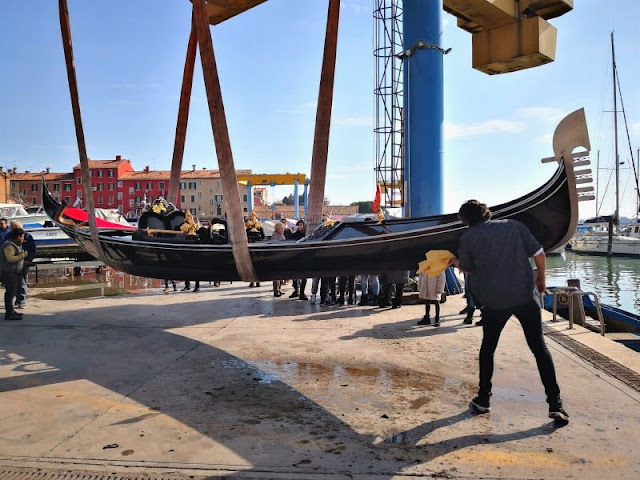 The proud owner cleaned her up, and she was ready to float.


With the aid of a hoist, she gently kisses the water for the first time. 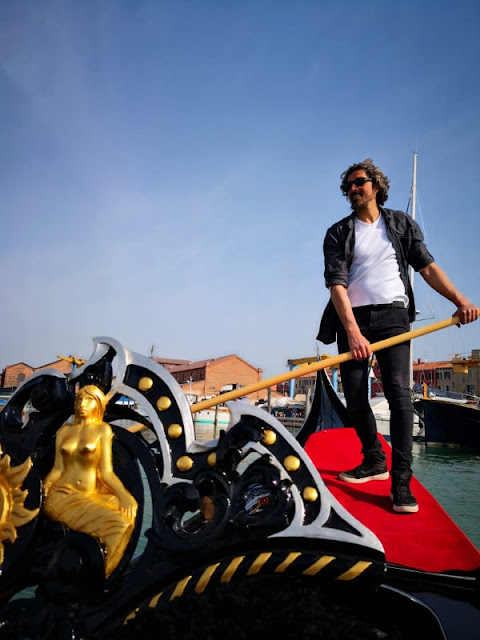 This moment must have been fantastic for Alessandro.
I wish I could have been there to witness it. 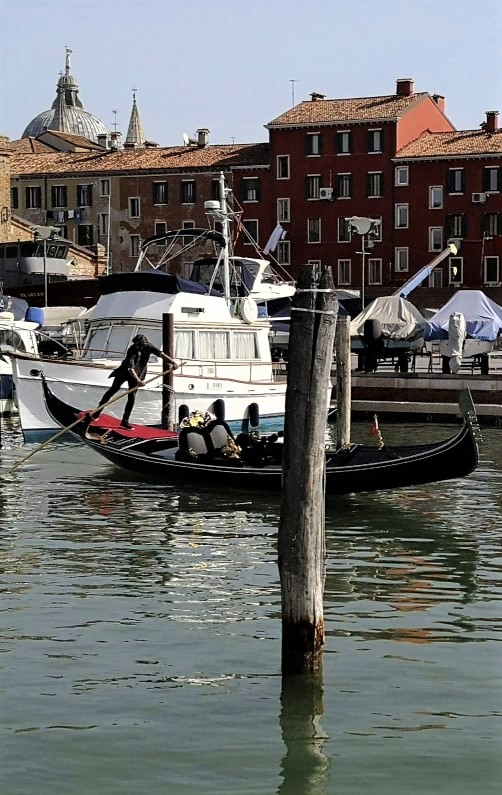 Taking her for a spin. 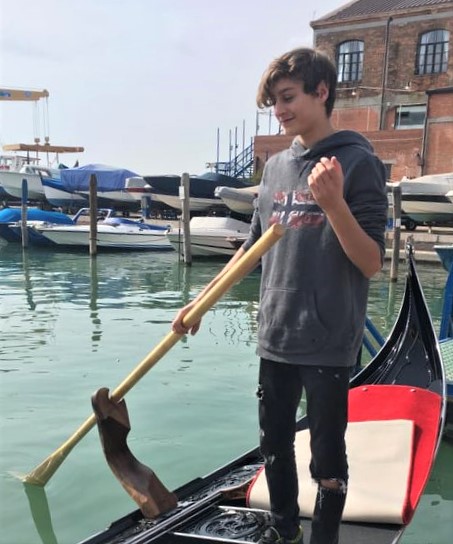 After the festivities, Alessandro's son Samuel stepped
on the back to take a few strokes.
I wouldn't be surprised if we see him in stripes one day.

Alessandro Santini is a well-established gondolier in Venezia,
who now rows a gorgeous new boat.

you can see the gondola and her gondolier in action along the Grand Canal.
Alessandro operates from a docking area in front of the Monaco Grand Canal hotel - just steps from the famous Harry's Bar.

So grab a spritz at Harry's, and then take a ride with Alessandro.
You'll be glad you did.
Posted by Gondola Greg at 10:08 PM

Beautiful! Wish you could have been there Greg!