photos and video by Martina and Nereo Zane 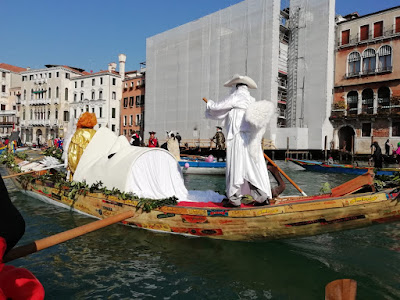 My dear friends Nereo and Martina Zane (father and daughter)
sent these gems from a recent parade in Venezia.

To say that "things get a little crazy around Carnivale" would be an understatement.
It's not the kind of naked street parade stuff you might see in Rio,
but those Venetians do know how to make things memorable.
There are definitely costumes. 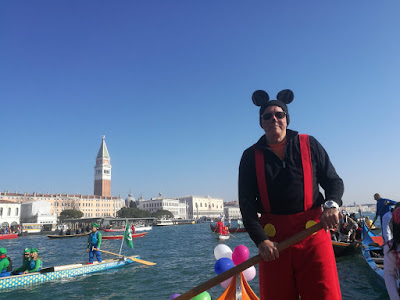 Among the many boats that took part,
the remarkable "Fruit Crate Gondola".

I first mentioned this unique craft in January of 2018.
A guy named Angelo Boscolo built the boat using those wooden crates that fruit vendors often receive their produce in.

To read more, go to "The Fruit Crate Gondola". 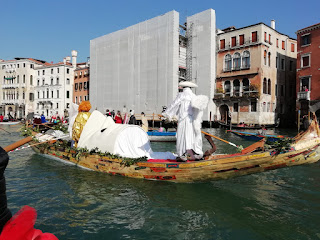 Here's the video that Nereo sent me from the same event last year.
You can see the famous "Fruit Crate Gondola" at the twelve minute mark.

The direct link to this video is here:
https://www.youtube.com/watch?v=oX-JQEX48NI


Imagine a multitude of rowing boats, with rowers in various costumes,
all assembling at Punta della Dogana.
They row down the Canale Grande,
pass under the Rialto,
then head up the Canale di Cannaregio - stopping just before the Ponte dei Tre Archi.

At the heart of the whole thing is a caorlina with a huge rat
(they call it a "pantegana").
As a grand finale, the pantegana bursts open with colored smoke and a bunch of multicolored balloons are released into the sky.

Nereo was honored to row as captain of the caorlina he was on this year, so video wasn't really an option, but he did get a few snaps of the pantegana as it was opening up. 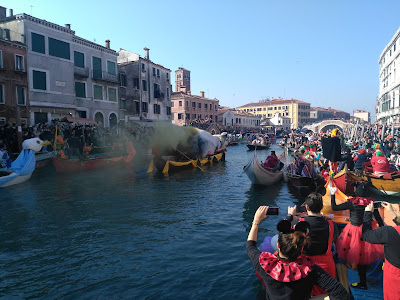 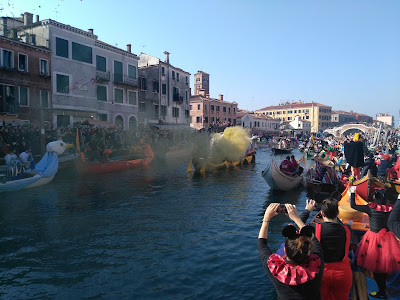 It's probably getting hard to breathe on that thing. 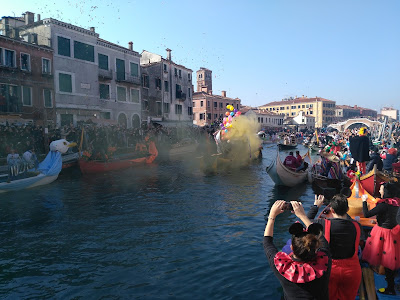 And here come the balloons.

Meanwhile, over on the Fruit Crate Gondola,
they had a rather clever sort of "felze".
Shaped like a traditional carnivale mask,
and bordered by lots of greenery,
this new addition to the boat looked great - especially with two gondoliers rowing in full white angel costumes. 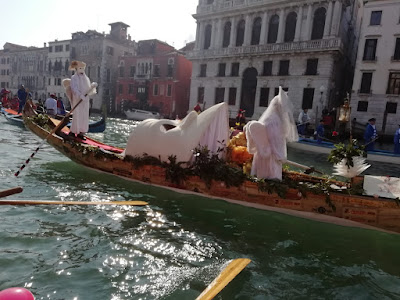 A side view of the "mask felze". 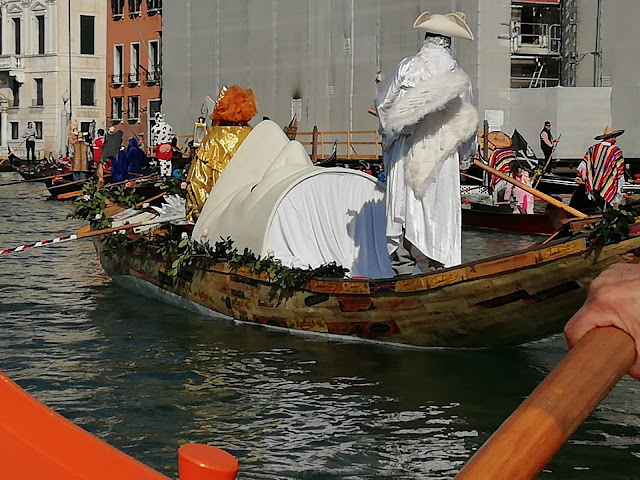 And check out those wings and the traditional tricorn hat.


Big thanks to Nereo and Martina Zane for showing us another side of Venezia.

I'm thinking about adding "row the Fruit Crate Gondola" to my bucket list.

Aloha my dear friend, thank you so much for the great post. I'm going to send a couple of photos taken and a short video taken yesterday, concerning the parade and regatta of Women's Day in Venice. Nereo