Here are the headliners.

The Regata Storica has many eye-catching, attention-grabbing spectacles, but the last regata, the race of the gondolini is the "main event" of the day.

These are the fastest and most difficult boats to operate of the day's races. The men who row them are the best of the best, having competed all season to get a chance to race down the Grand Canal with all of Venice watching, and cheering. 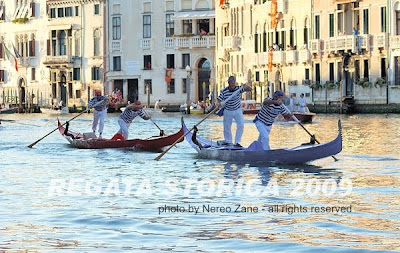 Graziano Seno and Alfredo Seno row the violet gondolino while Loris Tagliapietra and Rossi Maurizio "Sustin" of Burano pursue in the orange gondolino. 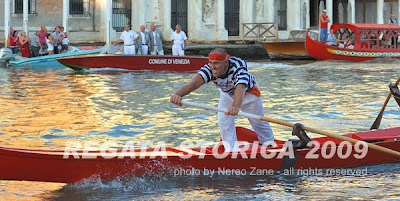 A close-up of the orange boat as Loris Tagliapietra and Rossi Maurizio "Sustin" give it their all.

Friends and fans of Bepi Suste will be happy to learn that Maurizio (in the above photo) is Bepi's son.

The commentators mention of Bepi during the race reinforced the fact that he is well-known and well-liked among Venetians and fans of voga-alla-Veneta.

Rowing a gondolino isn't just a brute-force affair; it requires perfect balance and precise execution of each stroke.
Additionally, the two rowers must work together and stay in sync.

I heard one of the commentators compare the gondolini to the "Formula Uno" in auto racing. 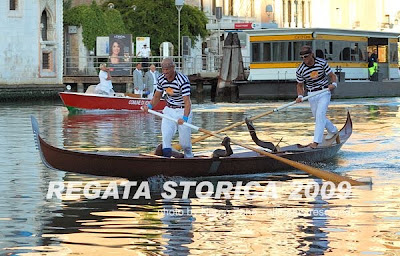 Watching the two Vignottos row was deceptive.
They were so smooth, and executed each stroke so well, that it looked easy.
I found myself saying "I could do that". It reminded me of that song in the 80's "I think I can fight Mike Tyson".

I want to give a big thanks to Gondola Blog reader Tamas Feher for sending me this year's broadcast of the historic regata. I've spent a lot of time watching the various races that took place that day.

As with the other race categories, there are nine boats in the gondolino field.

Usually all nine boats cross the finish line, but this year one boat had a problem.

As Giampaolo D'Este and Ivo Redolfi Tezzat were rowing strong near the front of the pack, a problem occurred early in the race. At first many thought it was due to a broken forcola. In fact I incorrectly reported just that (based on initial stories I read on the web).

The boat was inspected after the race and the two forcole were found to be intact.

After watching that portion of the race over and over, what little footage there is to examine shows that something went wrong with the popier on the sky-blue boat.

It appears as though Ivo lost his balance and fell. Some think he caught his remo on something underwater. Others say the blade of his oar got tangled with another boat, but the video seems to disprove that. Things like this happen so fast sometimes, and on a race course of water, it's hard to keep a camera pointed at everyone, all the time. When it happened, Ivo was just barely within the frame of one of the broadcast cameras. I watched him waiver, fall forward, and disappear out of view. The whole thing happened in an instant and was punctuated with a noticeable splash rising up when he hit the water.

I asked Nereo Zane about the issue and he said:
"What "really" happened to Giampaolo D'Este and Ivo Redolfi Tezzat during the Storica? Who knows!!! It's not easy to speak of that for them.

I watched and read two or three interviews in which they confirmed that something went wrong, Ivo lost his balance, maybe his remo touched something in the water. Maybe Ivo slipped, maybe maybe maybe ... The only thing we know for sure is that the gondolino rolled excessively and Giampaolo went in the water followed by Ivo.
You're right though; the plunge wasn't caused by a broken forcola or remo and there was no crash against other boats."

A simple YouTube or Goggle Video search will yeild several clips of the same incident. Take a look for yourself - it's played back in slow motion.

After the incident occurred, and the other eight gondolini had continued on, the two men and their boat were in the water. It's surprising how easily a gondolino travelling at racing speed can become swamped. The area was crowded with emergency response, law enforcement, race committee, and news reporting vessels.

Everyone watching the Regata Storica expects excitement, and this year they got it.

I can't wait until next year.

It's a bit difficult to think they made a mistake. I read they won the four previous races in a row and were already considered the "Michael Schumachers" of voga veneta. They were supposedly aiming for a fifth win in 2009 so they can keep the grand champion trophy forever.

(There appears to be an alternative explanation about a third, green boat and its role in the accident).

This is a lenghty blog entry, written by a local, which offers an alternative "green boat" explanation for the RS 2009 shipwreck:

The gist of the report is:
"The Vignottini were ahead but Tezzat hoped to overtake them, except that he couldn’t do it on their right because the entrance to the Grand Canal is relatively narrow and he would have found himself bottled against the pilings on the right and then running straight into a vaporetto dock.

So he and D’Este slowed down for an instant to drop behind the squeezing boat and pass it on its left. As soon as Tezzat did that, he discovered the next boat over on his left, the green gondolino, was moving rightward and on a potential collision course with him.

So he instantly made a counter-stroke to turn his boat slightly to the right, out of the path of danger. He was already rowing pretty hard, because he was working against the tide, as I mentioned.

It was a matter of nano-seconds. The force of his counter-stroke was just a little too hard and his oar popped out of the water, throwing him off balance — just enough so that on a moving boat he couldn’t get it back. He fell overboard but the boat, obviously, kept going.

This sudden unbalanced trajectory meant that D’Este, in the bow, lost his balance, because he wasn’t prepared for his boat to suddenly shift under him. He tried instinctively to correct, but the boat had already taken on some water from its first swerve over onto its side and over he went, taking the boat over with him."

It is still difficult to think those veterans, having successfully rowed several dozens of crowded regatas could make such a mistake. Maybe there was an underwater obstacle, indeed.

The author isn't a local but a foreign freelance journalist with her point of view.
Please read what written by "Il Gazzettino" and "La Nuova Venezia" about the incident occurred to GPD and IRT. The jury decided that no other boats were involed: are you better informed than the jury?