As I navigate the maze that is Venice, there are some spots I go to deliberately, to shoot photos and observe. Then there are those places I always just seem to stumble upon.
The Ponte dei Ferali is one of those places.
It's right by the Bampa brothers' hat shop, and not terribly far from Piazza San Marco. Each time I happen by that bridge, there's at least one gondola there, and it's usually something more than a "fleet boat". 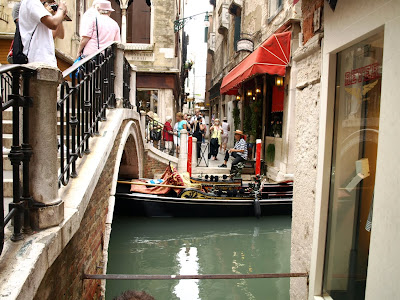 The other thing about the Ponte dei Ferali is that you can usually find one or two gondoliers sitting on a bench there on the fondamenta.
This is the same spot where I photographed the "brown shoe gondoliers" back in 2000 and the "two wedding gondolas" in 2006. Another post, "Illusion" was based on a photo from that same pair of wedding gondolas.

This time we're here to admire a boat with some very unique cavalli. I shot these photos in June of this year.
The trumpeting angel design is unique, but not altogether rare - it's the finish on those angels that deserves a closer look.
They appear to be green. 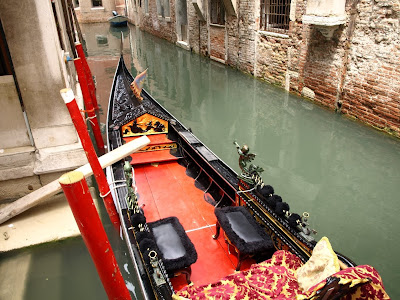 She's a "wedding gondola"; you can tell from the bow deck which is adorned with complete carvings. In addition to the carvings, the boat has many other luxury features, such as gold-leaf details and a nice brocade seat cover. 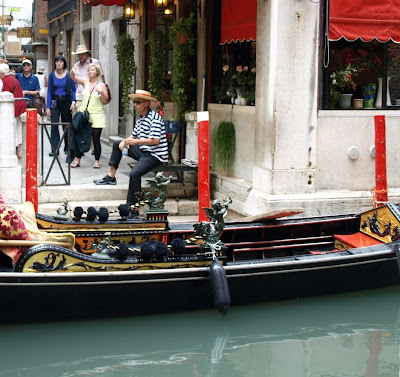 I always get a kick out of the way some gondoliers hang out by their boats looking like animals at the zoo. In some places they are animated - interacting with passersby, but in other places, like the Ponte dei Ferali, they seem to just exist there, while people walk by and observe.
I can just see the tourist couple from Texas walking by:
"Oh look honey, it's one of those gondoliers"
"Sure is baby-doll, take a picture for the folks back home"
The conversation takes place right there, within earshot of the gondolier, and it doesn't seem to register with the tourists that the gondolier can hear them...and speaks english.

As with nearly every place in Venice, there's a story behind the name :"Ponte dei Ferali". A few centuries ago this was an area known for the lamp-makers, who lived and worked near this bridge. "Ferali" is a dialect word for lamps, which in the 1700's were officially implemented in Venice.

Each time I visited this spot, the finishing touch of Ponte dei Ferali was a set of red and white striped paline. They looked like well-worn candy canes. I noticed this year that the "candy canes" have been replaced with poles that are all red with white tops. Hopefully those are temporary - I miss the cliche red and white striped ones.

Here's a good view of the hand-carved bow deck, with classic allegorical characters: 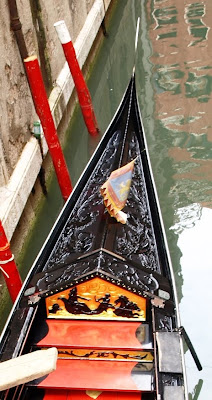 And now let's get a closer look at those cavalli: 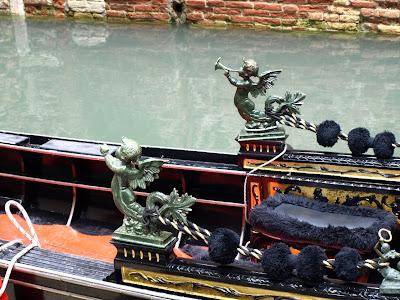 At first glance they seem to have a natural patina, like the oxidation you might find on a copper roof, but it looks as though the gondolier had them specially finished that way.

It's a rather convincing finish, and in a city where almost every gondola has brass-toned cavalli, who can blame a guy for trying something different.
It also looks like one of those angels is missing a trumpet.
In this last shot you can see a few of the ferali mounted to the wall above the gondola. 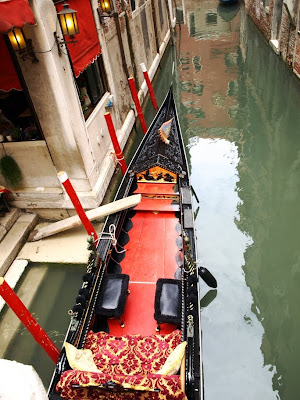 > "Ferali" is a dialect word for lamps, which in the 1700's were officially implemented in Venice.

That should be in a quiz game! A large majority of people would guess Ponte dei Ferali is named after stray cats taking a nap on its stones (or at least that was my guess). Venice has a large feline population, after all.

The green putto, are they different? One looks like silver-green and the other bronze-green. One of them also looks misaligned on its base, so maybe a careless passenger just kicked away the missing trumpet when disembarking from the gondola?