An Honest Woman in Venezia 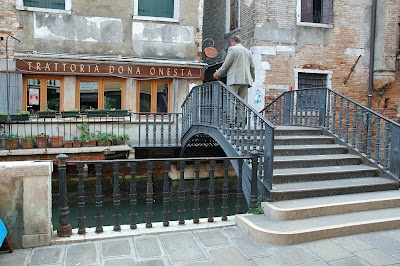 this photo by Nereo Zane
Most of the bridges in Venice today are made of stone.
There are a few wooden ones and even a few iron bridges.
This post is about one such bridge.

Several years ago I was running around La Serenissima, trying to keep up with Nereo Zane, and he showed me this unusual bridge. It wasn't very big, and didn't seem to be all that important. But it became clear that this bridge was worthy of regard. 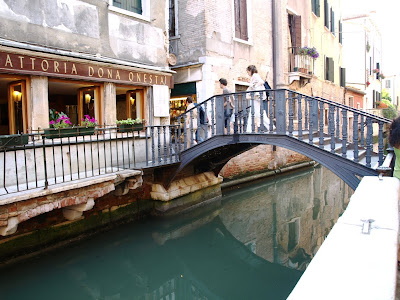 I did notice that the bridge looked a little different - it wasn't like the big heavy stone ones so prevalent in Venice. Nereo told me that this was the "Bridge of the Honest Woman".

I took a few photos of my own and then we moved on. Recently I contacted him about it and he gave me a few of the "legends" behind this unusual bridge.

Nereo writes:
there are severals legends about the "Ponte della Donna Onesta"

1st legend: Close to the bridge there was a sword maker living there with his young and pretty wife. A noble was in love with that woman and one day ordered a sword or a dagger from her husband as a trick to have the possibility to see and stay alone with her. The woman refused the advance from the noble so he raped and then killed her.

2nd legend: same as above but the husband (or a friend of her) arrived and saved the woman killing the noble with the dagger.

3rd legend: The only honest woman in Venice is the one whose face is embedded in the external wall of the house near that bridge.

4th legend: It seems that in that house lived and worked an "honest" prostitute.

5th legend: There are some documents that demonstrate that a woman whose name was "Honesta" in the '500 lived there.

6th legend: a bunch of friends were joking about Venetian women's honesty. One said that when the first honest woman crosses the bridge it will collapse ... but the bridge is still there!!

I love things like this. You never know what the real story is, but it doesn't matter - all the possible legends are fascinating.

One sure detail that we know of is that the bridge was made of iron - unusual in Venice. There are (and have been) iron bridges there in the past, but the standard masonry approach is far more prevalent. 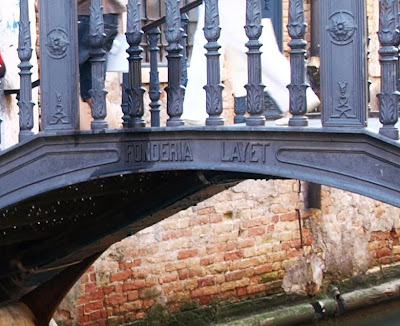 A closer look at the side of the Ponte Donna Onesta reveals that the main frame was produced by Fonderia Layet. And while I don't know much about the Layet Foudry, I can tell you that they built a nice little bridge which seems to do the job there in Dorsoduro.
Posted by Gondola Greg at 12:14 AM