Video Surveilance in the Veneto 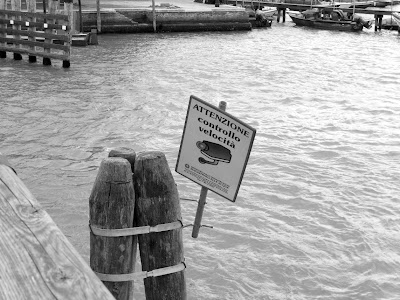 Here's a photo taken by Tamás during Vogalonga of 2009 while he was visiting Burano and the adjoining island of Mazzorbo.
Tamás writes:
After the rowing marathon has started at nine o'clock that day, I briefly visited the San Giorgio Maggiore Island and then boarded a ship at Riva degli Schiavoni to go to Burano and watch the rowboats go round the half-way mark. The ship route took about 90 minutes, because it was sent on detour, alongside the Lido coast, in order to avoid disturbing the Vogalonga participants.
I "wasted" significant time walking around Mazzorbo, as well as Burano.
I'd love to "waste" a little time in such a way.
The idea of video surveilance on the canals of the lagoon is both amusing and annoying.
Yes, technology is a favorite tool of law enforcement.
Next thing you know there will be guys on jet-skis,
hiding in corners, with waterproof radar guns.
Then again, the sign we're looking at may be the only piece of the puzzle left from an old system that was put in place and fell apart long ago.
Posted by Gondola Greg at 1:12 AM

As for another spot, do you know if this location is real or imaginary? Do gated canals truly exist in Venezia?