Some say that black is the most extreme color,
while others claim that it's not a color at all.

I think the options above may each have merit depending on the situation, but in the case of the Venetian gondola, the reason that gondolas are black began as an "absence of color". 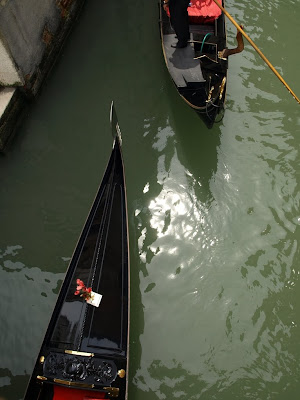 There are a number of incorrect theories behind the reason Venice's gondolas are black. Some of the more mainstream falsehoods include some sort of mourning.

I've heard a number of people claim that they are black to mourn the fall of Venice at the hands of Napoleon.

Others have said that Venice's gondolas are painted black to mourn those who died in the plague, and I've also heard it said that they are black because they were also used as funeral barges during the plague.

These are all interesting theories, and most of the false statements about the gondola could conceivably be true, but the truth is that there was no paint-color mandate - it was a mandate against paint.

For the longest time gondolas were the "private coaches" of the rich and powerful of Venice. Not surprisingly, these follks spent a fair amount of attention on looking good, which included dressing up their gondolas.
How a well-to-do Venetian appeared to his neighbors was important to him. Great wealth was poured into each gondola.

A little healthy rivalry can be good - it keeps people on their toes, makes them strive to be better, but at some point things got out of hand, this Venetian version of "keeping up with the Joneses" ended up on the radar of the city fathers. The more these high-profile Venetian families tried to outshine each other, the more money they dumped into the competition. It seems that what had begun as a harmless beauty contest, developed into what the leaders of the city called an "unecessary financial expense". 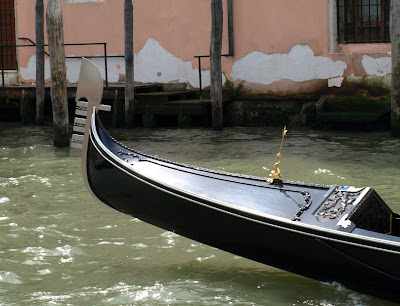 In order to curtail these unnecessary expeditures, a decree was issued in 1633 prohibiting many things including the practice of painting a gondola. As a result, they ended up black (as boats were waterproofed with pitch back then). Many refer to the this Venetian ruling as a "sumptuary law", akin to those issued in the days of the Roman Empire. Most of the Roman sumptuary laws revolved around clothing and were put in place to reinforce social hierearchies (by the rich, to control the not-so-rich).

The Venetian law of 1633 was different: it had been put in place to control the rich. There are some who are quick to point out, however, that the government's boats were exempt - giving them the ability to outshine the regulated boats.

Because pitch was used in the waterproofing process in the 1600's, an absense of paint meant that the boats would end up black. At some point black paint worked it's way into the mix, and even though the sumptuary law was meant to curtail the beauty of these boats, it really just brought about a new kind of beauty. Before that time, gondolas in Venice were ridiculously well decorated. Adorments of gold and other expensive materials literally hung from the boats. Brightly colored paints, which were a show of wealth as well, were used to outshine other boats. I'm told that ferros and other metal elements on the gondolas were sometimes made from pure gold.
This was all far from utilitarian, but on the Grand Canal it had become a priority to dazzle everyone.

The gondola today has a much more classy, understated beauty - one that doesn't scream out like a candy-apple red hot rod, but rather simmers with the seductive allure of a black Maserati.
It's a beauty that comes with confidence and inherent grace.

As I have obsessed over these boats for many years now, maybe it's conditioning, but I can't think of another color more perfectly suited to the Venetian gondola.

I'm not so crazy about seeing black on my toast for breakfast, but on a long boat full of complex curves on the waters of Venice,

... and, as another old story goes, when your family coach is very bright and uniquely identifiable, woe is the man seen out in it late at night with a young damsel not his wife. Black helps solve that problem too. :)

For these boats, I think black is beyond beautiful. It is sublime.

Greg I am ready for the book.
"An Essay in Venice" a compilation of your blogs. You can self-publish cheap on Cafepress.com.

The Plague, what a frightful and massive disaster. How long to mourn? A generation? It may have been unseemly not to appear dour. Not to say that is why gondolas are black but that it may have been a contributing factor. They felt a need to build Maria della Salute.
I have heard that only the patriarch of the church could have a decorated gondola.

Bob:
Thanks, I'm glad you liked it. Sorry it took so long to finish it - I wanted it to be just right.
Your "family coach" story is a great one - I've heard it before, and like so many other explanations - it certainly has it's merits.

Bepi:
Flattery will get you everywhere.
I must admit that I've thought about that same idea a time or two, but I'm not sure that many people would buy the book. The folks who might find it interesting...have already read it here.
It's the curse of blogging:
Instant exposure,
but within 24 hours it's yesterday's news.

As for the gondolas being in mourning, It certainly must have seemed fitting in the days that followed the plague. I can't even wrap my head around what it must have been like in Europe back then.

As for church patriarchs - has anybody seen the Pope's gondola?
I saw a photo of it once - fancy as could be, and the cavalli had little bowls for holy water.
I couldn't help but wonder if it also had some of the features we saw in that James Bond movie.

The foreign ambassadors were also allowed and encouraged to use colorful luxury gondolas (much easier to keep an eye on them by the Venetian Republic's secret police).

They provoked the rival clubs to brawls and swordfight (e.g. Romeo and Juliet). City councils soon had enough and mandated "plain" clotches for their citizens.

The youth then started pulling large bags over their garments and cut slits in it to make their club colours visible. This is how the silly looking slashed slops and jerkins of the Elizabethan age came into fashion all over Europe.

After this haute couture madness was finally supressed, vehicle pimping (extravagant gondolas) came into fashion as a way to display excessive wealth.

I would like to see that photo of the Pontiff's gondola!

I propose we do a reality TV show called "Pimp My Gondola".
I'm thinkin' rhinestone encrusted cavalli, crushed velvet seats, a platinum ferro and metal flake paint. Oooh! and a trailer with jumping hydraulics! If you get the trailer to heave just right, it'll fling the gondola over a rail and into a waterway - no ramp or hoist needed!
We'll bring in Flavor Flav as the show host.

Only padavans need trailers! The truly advanced, the masters can launch a gondola by simply raising their hands and channeling the Force!

The partiarch or Bishop of Venice, not the Pope.

I guess if the Pope ever had a gondola it was painted white with light yellow stripes, the official flag colours of Vatican.

During the Republic there were many sumptuary laws, including restrictions on types of cloth that could be used to make clothes worn by noblemen, the amount of jewelry a noblewoman could wear, etc. This is because *technically* all members of the patriciate were equal, although in practice some were very rich, some very poor. The idea was that the government did not want some rich nobleman to start behaving like a lord (as they had in other cities) and get any ideas of becoming the ruler of the city. There were restrictions on things such as how many dishes could be served at a wedding, etc. etc. The Republic had a fascinating government....

Hi Greg,
I came across this page by chance, while searching for some other info on gondolas.
I had already heard this story about sumptuary laws forbidding the use of flashy colors and decoratios for gondolas, and most sources I've seen say that the said law was made in 1609. You say that it was 1633, and I guess that you have not invented that one, it must have been reported by some other sources too.
But...
There is this painting by Gentile Bellini, a quite famous Venetian artist who has lived from 1429 through 1507: https://it.wikipedia.org/wiki/File:Accademia_-_Miracolo_della_reliquia_della_Croce_al_ponte_di_San_Lorenzo_-_Gentile_Bellini_-_cat.568.jpg
The painting was made somewhere around 1500 and, as you can see, the boats were all black. So if the black color is indeed a consequence of sumptuary laws, then these laws must have been issued well before 1500 - contrary to the mainstream version of facts. I find this discrepancy quite curious, perhaps you might be interested in digging a bit deeper into this story and share your findings? :)
Having said that, this site is great and very informative - keep up the good job.
Cheers