Andrew McHardy and His Huge Forcola

I toyed with the idea of a "build-up" approach, with text like:
"It's BIG"
and such, eventually leading up to the photo way down the page, but it seemed to me everyone would invariably scroll down and see the photo first.
After some consideration, the above title was simply unavoidable.

If you haven't scrolled down yet, get ready to be shocked...and now look at that enormous oarlock! 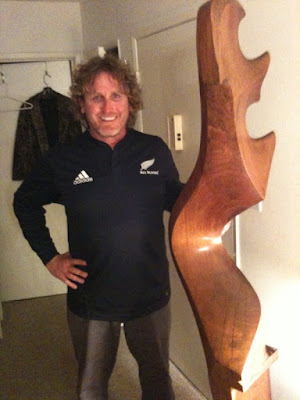 I showed up the other night for the event at Sunset Gondola, and Andrew and Tim couldn't wait to show me this photo.
As Tim put it: "no build-up would be too much".
I thought to myself "what could possibly be worthy of such an introduction?"

I was not disappointed.

So here's the story as it was told to me:
Andrew Mchardy was visiting a friend named Jason Bissell in North Hollywood, when Jason said something along the lines of "You've got to see this, you're not gonna believe it!"
Jason has the unique distinction of being one of the only gondoliers ever to have actually been fired from the operation in Alamitos Bay. Tell that to a bunch of boisterous gondoliers on a pilgrimage to Captain Jack's and they'll raise a toast to the man.
Jason lives in North Hollywood next door to a German woman who is about to do some vacationing. A while back she asked him if he wouldn't mind watering her plants while she was out. He agreed, and walked into her place only to find the biggest freakin' forcola anyone's ever seen, just standing there and serving as a makeshift coat rack!
After expressing his amazement, his neighbor told him that it was a gift from the actor Anthony Quinn.
It turns out that Jason's neighbor dated Anthony Quinn, and while he was in Italy (probably working on a film), Quinn sent her this gift.

Details:
Yes, it's made of real wood - the type yet to be determined.
No, I don't know who carved it as of yet.
Yes, it does appear to be modeled after a forcola da pupparin.
and NO, Andrew is not a midget, the guy's six feet tall. The forcola really is that big.

So that's what we know so far, but rest assured I'll be making my way up to North Hollywood some time soon to see this Paul Bunyan sized forcola for myself.

No, this isn't an April Fool's post.
I wish I could be creative enough to come up with something like this, but sometimes the truth really is stranger than fiction.

This reminds me, does anyone want to buy a 90' Puparin?

Anybody got a 60 foot remo for sale?
I'm in the market.

> he was in Italy probably working on a film, Quinn sent her this gift.

That movie must have been the "Attack of the 50 Foot Woman"?

Hi I might be interested. Just visited tonight a maker of such forcolas here in Venice Italy but he had none for sale. Drop an email if interested. Thx, Ze'ev, from Toronto, Canada