To say "they know how to have fun at the GSVVM" would be a major understatement.

The Gruppo Sportivo Voga Veneta in Mestre is a rare find. In a world where people are constantly trying to "re-create" or just create a great experience, once in a while you come upon the "real thing".
I first found this place in September of 2000, and because I was a newcomer, I kept it to myself.
Back then I didn't think it was appropriate to start dragging folks in until I'd been a member for a while.
This wasn't easy to do because the place is great and the people are fantastic.

There's not a lot of effort put into having fun a certain way - they just go for it, do what comes naturally. 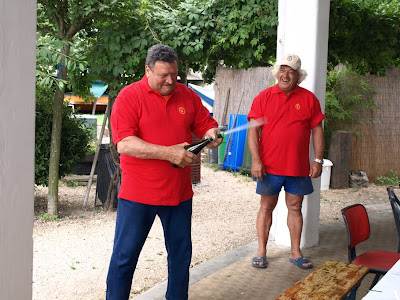 When Giannino opens a bottle of prosecco,

he doesn't just peel the foil and undo the wire.
Sure it's fun that way...
But how much MORE fun would it be to WHACK the top off with a sabre?!

Doesn't every guy want to do that at least once?

There aren't a lot of broadswords hanging from the walls of the GSVVM, but after rooting through the cucina there at the club, Giannino found himself a suitable piece of hardware.

He peels the foil, hauls back with a giant kitchen knife, and WHACK, splatter, the sound of broken glass on the ground and, of course, big cheers from those around - who moved in quickly after to fetch what libation was left to be served.

Sure, we lost a little in the process,
but it was awesome. 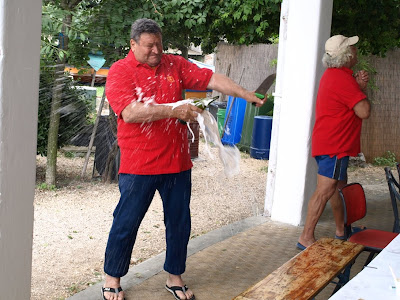 I'm assuming that Bepi was just averting his eyes to avoid harm, although I have to wonder if he was also saying a quick prayer.

Bepi and Giannino are two "X factors" who, when you include them in anything - make it memorable, and worthy of a good photo or two.

I agree: nowere in the world you can find two crazy guys like Bepi and Giannino!

This photo is his first attempt and the bottle disintegrated in his hands. His second try was flawless and the contents refreshing.