As the day went on, I got used to being alone on the river.
I never stopped looking over my shoulder – that reflex will never go away.
I’m certain that the one time I choose not to look back, there will be a burly tug dragging an enormous cargo barge right down on my stern.
I’m a big believer in Murphy’s Law.

Sometimes I think I’m actually related to Murphy.
But I digress.

The Missouri River is wild, fairly untouched, and in a sort of rustic and historic way “pristine” – at least the section I was on matched that description. Sure, there were a few signs of civilization: freight trains passed by along shore, buildings could be seen now and then, and once I saw an old armchair sitting on shore, having been washed downstream long ago. But the sea of trash that we encountered in other waterways wasn’t there.
I’m not a big “recycle or die” person, I do recycle, but it’s mostly because I don’t like to throw away something that I can get money for. That said, it is disturbing to be rowing along a beautiful waterway and run into a bunch of empty plastic bottles and cans. I saw none of that on the Missouri.

Here’s the fourth “Report from the River” video clip:


Even though I’d just left the Kansas City metro area, this really was the middle of nowhere, and I loved it. Sections of the river actually resembled places I’d seen in Alaska. Throw in a few bears and some salmon and I’d feel like I was on the Yukon in summertime.

As I mentioned in the video, there were no cows to be found. Maybe it’s cliché to expect such a thing, and maybe there are more cows in Wisconsin, but I figured I’d see at least a few by this point.

Throughout the expedition I was in communication with my wife Elisa.
I’d drawn up a strategy for the row, with potential haul-out points every five to ten miles.

As I rowed, Elisa would drive ahead and scout each location, making sure the ramp was available.

Our first three haul-out points were included in the plan to anticipate emergencies – you know, “help! The boat’s sinking”, or “wow, I didn’t expect to be rowing against 30 knot winds”. The first haul-out point worthy of serious consideration was at the 15 mile mark, just under the 291 bridge near Courtney and La Benite.

Elisa arrived at the ramp, called to see how I was doing, and waited for my arrival, snapping a few photos as I came in. 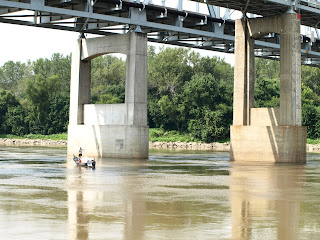 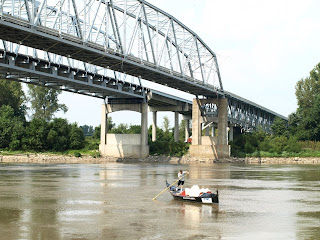 Heading towards the ramp, 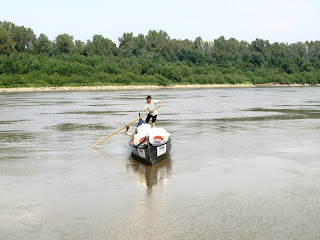 ...and fighting a little current to get there.
I came in and beached the gondola, stepping off to talk and take a break for a few minutes.
Then, in short order, I climbed back on to continue down-river. 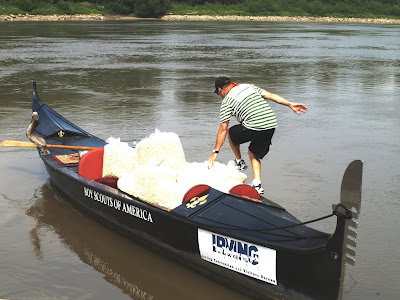 Navigating around all those bags of popcorn was a daunting task at times.

Here’s my fifth “Report from the River” video clip:

As I rowed past bridges with notches painted up their stanchions, I was reminded of how high the water could get at times.
Bridge clearance is important on a river, and while barges weren’t plowing up and down the Missouri that day, I could tell that they had in the past.
Somewhere along the way I came upon this awesome bridge. 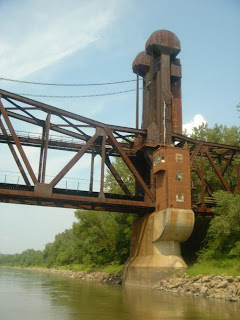 I have no idea if it still works, but in the past I’m sure that engineers in greasy overalls and choo-choo hats raised and lowered a section of the tracks to allow ship traffic to pass through. 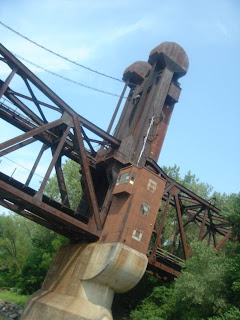 (to be continued)
Posted by Gondola Greg at 2:12 PM

The bridges are an interesting topic. Some time ago an engineering historian told me bridges in Europe were mainly for the benefit of road travel from ancient time on. Riverboat use came centures later and they were forced to lay low and narrow to fit existing bridges.

On the other hand, in USA ships were one major form of discovery and transport for the early decades, when train was not yet there to cover the vast distances. Ships were made the largest possible and tall to serve all demand.

When settled civilization and bridges appeared, they had to allow the established boat traffic somehow. Therefore one can find many curious, rotating, up-lifting or drawing-bridge style river crossings in the USA.

These ingenious pieces of architecture seldom occur in Europe, only in extremities like London or St. Petersburg.

The curios lifting bridge in the story is apparently the Harry S. Truman Railway Bridge

Nowadays we live in a global world. Information goes from one side to the other. Be a gondola man in USA is a... no have words to say how it is.

Rowing is a god way of living, maybe is the only way.
The man from Alcanada

Anonymous from Alcanada in Mallorca, Spain. Gondolier di Venezia come un grandissimo dei, Gondolier di USA come un piccolo dei.
As part of the EU you could be a gondolier. Start with a name. How about "Andrea Benespana". Much better than anonymous.