A new bridge in Venice has been the source of much talk and even some argument in and around the Veneto. Officially opened on September 11th, 2008, and introduced as the "Ponte della Costituzione" (Constitution Bridge), I'm told that most folks refer to it as the "Ponte di Calatrava" (bridge of Calatrava).

Designed by Spanish architect Santiago Calatrava,
the 94 meter span joins Piazzale Roma with the Santa Lucia railway station. Many claim it to be a worthy connection, but not everybody thinks the level of need justified the level of expense. Along with the government officials who greenlighted the bridge, the designers have also received criticism. Detractors claim they made little or no effort to accommodate handicapped or wheelchair-bound people.

To add to all of this, Calatrava's Bridge has a decidedly modern look.

Venetians are hardly ever guilty of not having an opinion, and I've seen that quality rub off on many of my friends who love gondolas and/or Venice.

Some think the new bridge is fantastic (it certainly solves some transit problems), others say it's a heck of a lot of money to spend just so some tourists don't have to take the vaporetto for one stop. Some critics say that it "doesn't match the city". A few people even despise it so much that they refuse to cross it.

During previous visits, I saw the bridge at various stages of construction, and in June I stepped foot on the new bridge for my first time.

I found that while it did indeed have a more progressive appearance, the builders had used materials that blended in better than I'd expected them to. The use of Istrian Stone was probably a wise choice as it is present in buildings throughout Venice.

If you do a search on the web, you'll see that Santiago Calatrava is responsible for numerous other structures - many of which are a lot more radical.

In fact in some ways I thought Calatrava's bridge design complimented its surroundings, as the glass sides allowed one to look through at the city behind it. From some angles, the city and sky could actually be seen in reflections on the glass.

I only saw the bridge in the daylight, but the photos I've seen at night show an entirely different bridge, with dramatic lighting and glass steps that were lit from beneath. 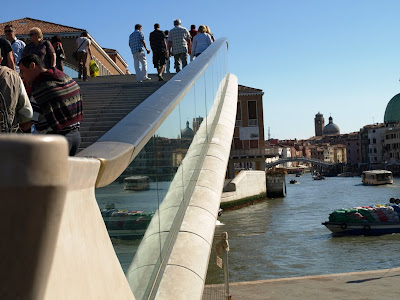 Buildings, boats, and the Grand Canal reflect in the glass of the Ponte della Costituzione.
The weight-bearing structure of the new bridge is a unique series of interconnected arches, creating a strong yet somewhat flexible span. 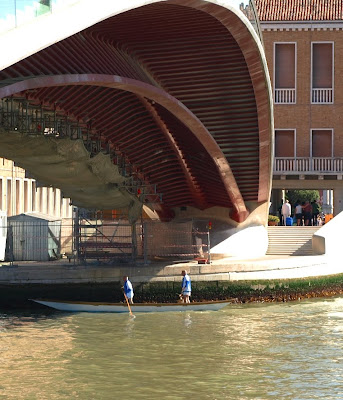 Two rowers pass under the bridge in their mascareta on a spring morning.
Approaching Venice's fourth bridge, your view consists of steps, arched handrails that float atop glass walls, and winged butresses at the entry area. 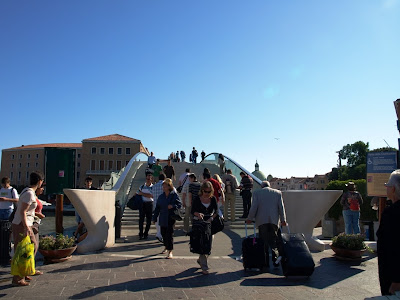 As with a lot of structures in Venice (both new and old), the Ponte della Costituzione has some scaffolding and masking material on the North-West side. 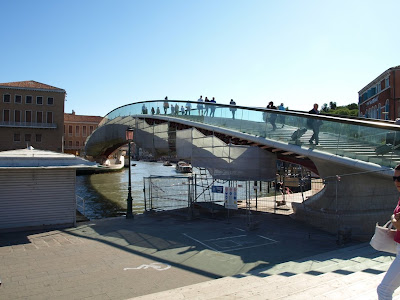 Opinions and discussions continue to fly around regarding Calatrava's new bridge:
whether it's aesthetics fit the city of Venice,
whether or not it was a worthy use of funds,
how necessary it was,
how long it will last,and how it will affect the city.
In matters such as this, I believe that only time will tell.
Maybe in ten years we'll be able to truly determine the answers to those and many other questions.
I will say this, my family and I found it very useful a few times when we needed to get from Piazzale Roma to Ferrovia.
But I must admit: I wonder if it was worth it for Venice to spend that much money.
Posted by Gondola Greg at 12:01 AM

I find the bridge beautiful in many ways and a tribute to the artistic history of Venice.

As for value, a fellow once described the operation one has to enlarge nasal passages as, "It let's more stuff in." So, for Venetians, the bridge eases the entry of the day visitors ... and many day workers.

As a semi-frequent visitor to Venice, the new bridge saves me carrying luggage over 3 other bridges that have no cartways, and THAT I really like.

Awesome analogy Bob.
I'll think of the new bridge every time I blow my nose.
I couldn't Agree with you more on the luggage carrying part.

Carrying on with that visual Greg, I am now stuck with the image of a miniature little gondola traveling around through my nasal passages.