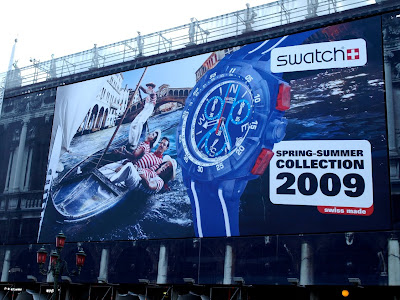 I saw this advertisement while walking through Piazza San Marco one day in early June of this year. In the lower left-hand corner you can see one of the lamp-poles which are typical to that part of Venice. With the lamp-pole in the shot, you can really get an idea of just how big this ad was.

I hesitate to call it a billboard because technically it was a huge banner stretched tight over the side of a building.

The shot is of a "crew" of gondoliers sailing a gondola down the Grand Canal.
I'm sure there's some sort of logic behind it, but the best explanation I can think up is that someone at Swatch said: "hey, we should hang a banner advertisement in Venice to promote our new sailing watch", and another guy chimed in with "yeah, let's put a bunch of gondoliers sailing their gondola".

And I'm sure plenty of people loved the ad; some might have even marched out and bought a Swatch as a result.

I love the ad, but not for the same reasons most folks do.
I love it because it's silly, and absurd, and so obviously staged that I can't help but laugh when I take close look at it.

Swatch does have a watch named the Gondola, (or maybe it's the Gondolier, I can't remember which), but this is not it.


Upon closer inspection, we see that the gondola used for the photo was, shall we say, "no Spring chicken". Molto vechio! 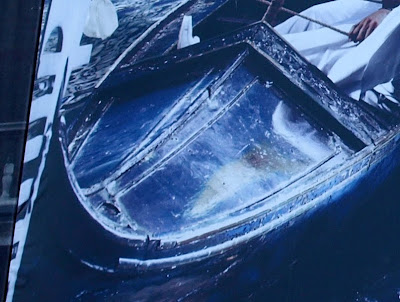 In fact, based on the appearance of the deck, I'd guess that this was a gondola which had been out of the water for a while, something they rolled into their studio to dress and shoot.
I could be wrong here. In fact I could be disparaging the pride and joy of one of my Gondola Blog readers.
If that's the case I must apologize...and also recommend a fresh paint job at the very least.

Now let's take a look at the "captain" of our sailing gondola.
Mmm, nice suspenders!
I haven't seem those for sale at the gondolier store, but maybe I just wasn't looking hard enough. 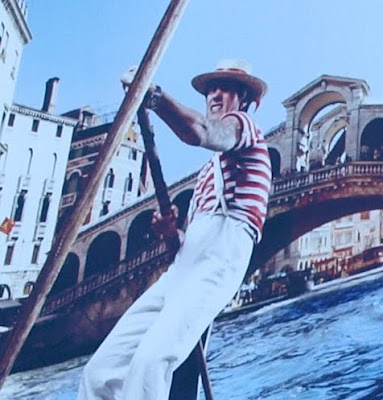 Is it just me and my short Napoleon-like stature talking here, or does that guy have the longest legs in all of the Veneto?
Holy moly, I think he could step right over me, or kick me from across the Canalazzo.
In all fairness, I must give him props for selling the part - he does look fairly convincing as a rudder-man.

Now let's check out the "crew".
These guys are great,
just like their captain, they're working hard to look the part.
I could be mistaken, but I think I've seem one of them in a Mexican TV commercial for margarine.
"Mantequilla, mantequilla!" 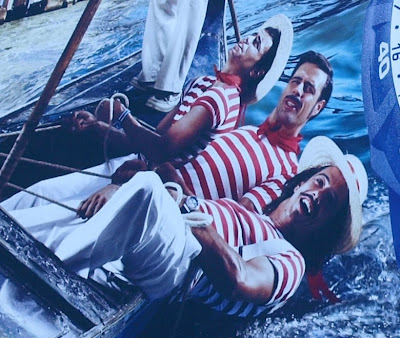 Again, the wardrobe department may have taken a few liberties, but I'm willing to forgive some of the minor mis-steps in the clothing choices.
The moustaches are not so easy to forgive...or forget.

Of course I'm probably not the best one to criticize such ads, as I am partially responsible for the photo of a gondola going down the rapids of the Colorado River.

Go ahead folks, send me your flame e-mails - I probably deserve them all. But please, try and keep the butter-cow comments to a minimum!

At some point, when I'm in a similar mood, I'll throw that photo up and open a fresh can of ridicule.

- How did those Swatch gondoliers fit under the Rialto bridge with their mast up?

- That Swatch ad must have made Gilberto Penzo really mad! He has collected hundreds of different, genuine sail-powered venetian boat designs, but people only ever care about the gondola.

- On the positive side, the Swatch ad was somewhat Venice-related. Years ago I saw a car ad at the Piazetta molo, it was covering the whole side of the Doge Palace. Cars are the most useless objects in Venice...

Giant banner ads are erected only for their tourist shocking value in Venice.

- On the more serious side, I am pretty sure someone, sometime in history must have sailed a gondola for real, either deliberately or as an emergency measure. Considering american inventiveness, Florida and California gondoliers of old could be prime suspects.

(Although I don't know about the required changes in design, center of gravity, etc. to make the gondola stable with mast and canvas up.)

Of course Photoshop, I was just pointing out the internal inconsistency of the advertisement, mast versus bridge.

By the way, do they broadcast tomorrow's historical boat regata on TV or the web? I can watch the late afternoon venetian rowing races live on Rai Uno, but that usually does not cover the costumed 'Storica part.