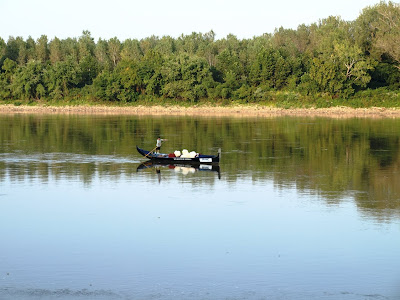 photo by Elisa Mohr
In the Movie “The Outlaw Josey Wales”, there’s a great scene in which a group of men has just boarded a ferry that crosses a river using a rope. The ferryman uses that rope to pull himself and the boat back and forth between the two shores. Clint Eastwood’s character, “Josey Wales” raises his rifle from the shore and is admonished by a traveling salesman, who says:
“Do you really think you can shoot all those men down before they shoot you? No, no, Mr. Josey Wales; there is such a thing in this country called justice!”
To which he replies:

“Well, Mr. Carpetbagger. We got somethin' in this territory called the Missouri boat ride.”
He then shoots the hauling rope, setting the ferry adrift down the river.

“The Outlaw Josey Wales” is one of my favorite movies, and I spent a lot of time on the river thinking about that scene, as I was enjoying a “Missouri boat ride” of my own, although nothing like the one in the movie.

Traveling down an American river is often like taking a trip to the past. Many of our rivers served as the sole cargo and transportation corridor of their region. Additionally, many North American territories were first explored by Europeans using the rivers running through them.

During my row, I also contemplated the many agricultural and industrial facilities that had at one time been in peak operation along the Missouri. Then I thought back further, to the first exploration of the region.
In 1804 the famous Lewis and Clark Expedition traveled up this river, landing at Kaw Point on June 26th. Many consider them to be the first to “discover the region”, but in truth, a Frenchman named Bourgmont was not only there first, he lived with the Missouri Indian tribe, married a woman of the tribe and had a family there.
Even so, in modern day studies, Meriwether Lewis and William Clark get most of the attention. It was their expedition, following the Louisiana Purchase, that blazed the trail for most of the Missouri River’s settlements. 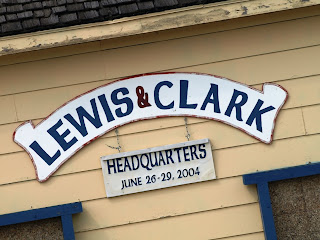 The Kaw Point location, where we launched this gondola expedition from, was the headquarters of Kansas City’s 200 year anniversary celebration.

The good people at Wikipedia tell us that “Many of the noteworthy explorations of the west began somewhere along the Missouri”, further stating that “The river defined the American frontier in the 19th century, particularly downstream from Kansas City, where it takes a sharp eastern turn into the heart of the state of Missouri”.

Of course before Lewis and Clark, before Bourgmont, and before the Spanish, French and American governments bargained and fought over the area, Native American inhabitants called the river their home, travelling her waters in dugout canoes.

While I didn’t see any cows that day, I could hear the cries of eagles in the trees, and Great Blue Herons would fly off now and then – having been startled by the gondola as it went by.
One time I passed by a creek that fed into the river, startling a heron. The sudden movement of the heron in turn, scared a bunch of really big things that were just beneath the surface. From where I stood, they looked like giant eels or something equally terrifying writhing around in the shallow muddy water of the creek. Realizing that they would probably move into the river toward me, I decided to row my butt off at that point. 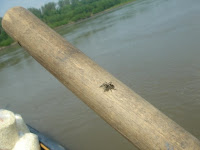 I had a large jumping spider climb up the oar and walk over one of my hands. I snapped a picture just before he jumped into the boat.


As I became acquainted with the river’s currents, I also learned a thing or two about “wing dikes”.

These long rock piles stick out into the river like the jetties of a breakwater. As a river flows, sediment builds up on the inside of a turn, forcing the river to develop more pronounced turns, following a serpentine pattern, and eventually cutting through to leave a series of “oxbow” lakes behind. In an effort to minimize this progression, wing dikes have been placed on the insides of turns. Most of the wing dikes I encountered were quite visible, but now and then I’d detect one just under the surface – made evident by the behavior of the water ahead. Kayakers I spoke with before the row warned me to be careful not to let the current pin my gondola against one of the submerged wing dikes.

Here’s my sixth “Report from the River”:


As I mentioned in the video, after spending almost an entire day on the river without seeing another vessel, some guy in a little red and white ski-boat came zipping by with his dog. He came over to “make sure I was ok”, and got a free bag of popcorn out of the deal.

By this time, Elisa had arrived at the launch ramp in Sibley and we were trading phone calls and talking about the haul-out; using an earpiece, I was able to talk with her while rowing. The ramp at Sibley was on the inside of a bend, right before a big power-plant.

I had spent the first few miles figuring out how to navigate the river, and the rest of it riding the outside of each bend. Now, as I neared Sibley, I passed two final wing dikes and moved towards the inside of the last bend in order to reach the ramp.

Everything was going well, I had the ramp in my sights, and then suddenly I noticed the tell-tale signs of another submerged wing dike just ahead.
I rowed feverishly, trying to get around the end of the dike as the river pushed my gondola closer and closer.
If things were stressful on the boat, they were even more so for Elisa, who was getting a play-by-play description over the phone of what was happening, but couldn’t see how close I was to the submerged rocks ahead.
Focused on keeping my cool, I rowed as hard as I could, eventually clearing the end of the wing dike by just a few feet.

By the time I reached Sibley I had rowed thirty miles. The current wasn’t that strong at the ramp, but I sensed it would be a challenge getting the boat into position and onto her trailer. Several times that day, I’d rowed against the current without having to work too hard, but this time I had to not just row in place, but also make headway back upstream.
Our driver had already backed the trailer into the water, and was ready for my approach.

I traversed over from the center of the river to the ramp and looked for a calm spot just along shore, or better yet, a backflow. To my surprise, there was more current moving past the ramp than I’d expected. The next thing I knew, I was rowing as hard as I could in my weakened state, struggling to get in line with the trailer and advance upstream.
The trailer was too far into the water.
I shouted to the driver that I needed him to pull forward. He didn’t hear me the first few times, so I spent extra time rowing in place against the current.
The driver pulled the truck forward, exposing the vertical side-poles and I rowed hard against the blowing current, desperate to make a landing.
As I was propelling the boat forward between the side-poles, the driver climbed out onto the trailer bunks and caught my ferro blade, holding tight.
I took a few deep breaths and relaxed, knowing that the rowing portion was finally over.

Looking back on that last five minutes of the row, I realize that the task was simple, in fact I’ve done it dozens of times, but after a full day of rowing, it was all I could do to close the gap and complete the task. 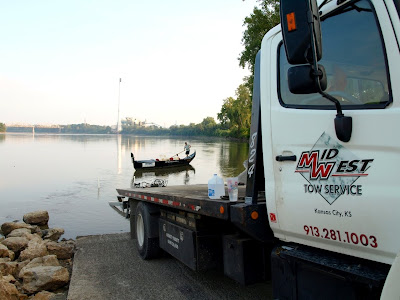 Approaching the trailer at the ramp in Sibley.
The 700 foot power plant stack and the Sibley railroad bridge can be seen in the distance.
photo by Elisa Mohr 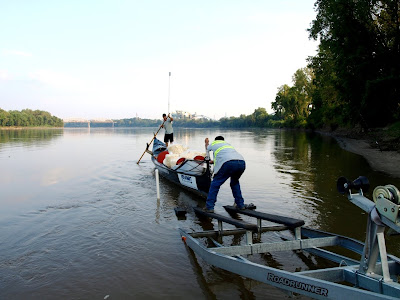 The driver grabs the ferro as I take a deep breath.
photo by Elisa Mohr

Sibley is a small Midwest town.
I can only imagine that the bulk of its residents work at the power plant, which supplies electricity to the region.

Elisa recruited a few of the more colorful characters she’d run into at the ramp, and once the boat was out of the water and on the trailer, they took a break from their end-of-the-work-week drinking and helped me unload the popcorn and supplies from the gondola.
We sent them off with a few big bags of popcorn, warning them not to eat it all at once, and they showed us photos of the various monster-sized catfish they’d caught in the river.
Funny thing: those catfish in the photos looked a lot like the “giant eels” I’d seen earlier. 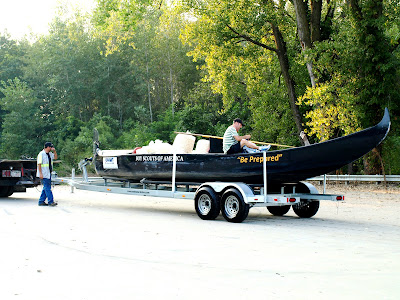 photo by Elisa Mohr
The next morning Elisa and I brought the rest of the popcorn to the front desk of our hotel, and later that day, a scoutmaster picked them up. I suspect the hotel kept one or two bags for themselves.

Here’s my final video report from the day:

Thanks for reading along, my friends.
-Gondola Greg

> they showed us photos of various monster-sized catfish they’d caught in the river. Funny thing: those catfish in the photos looked a lot like the “giant eels” I’d seen earlier. <

Greg, don't worry about the Sibley Generating Station, it is not a nuclear powerplant. Imagine if you had to row near Chernobyl: