In September of 2000, under the tutelage of Maestro Arturo Morucchio, I rowed in the Venetian lagoon for the first time.
photo by Nereo Zane.
With the help of Nereo Zane, I had joined the Gruppo Sportivo Voga Veneta in Mestre, and Nereo made sure that I received some training from his old friend Arturo.

At the time, I felt lucky to receive such expert coaching, but it wasn't until later that I realized just how big a blessing Maestro Morucchio's instruction was.

My week rowing with Arturo was filled with great experiences, but my favorite was the day when we rowed across the lagoon, into the city, under Tre Archi, down the Grand Canal, and under the Rialto Bridge.

In the years that followed, each time I went back to Venice we would row together.
We had a strange friendship in that Arturo spoke absolutely no English -- and my Italian was still very much in its "developing stages" (and still is).
Nevertheless, I did all I could to show my appreciation towards Arturo for all he'd taught me. 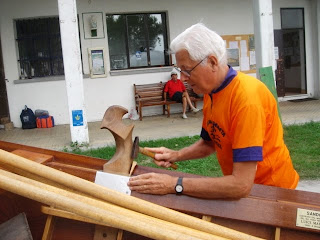 Arturo mounting a forcola before one of our rows.
When Arturo lost his battle with cancer in May of 2007, a lot of people were left with great sadness...and even greater memories of the man.
I will never forget the first time I rowed under the Rialto Bridge with him.

Last month I found myself back in the Veneto, rowing on a GSVVM mascareta with Megan Sliger from Boston.

In her first week on the lagoon, Megan's rowing capabilities were miles ahead of where mine had been back in 2000.

We'd been out training the day before and I knew she was ready to make the journey.

Our lagoon crossing was just as I'd expected it to be: a sunny day, a light breeze, and motor boats of all types passing by at different speeds.

Jockeying around to avoid and compensate for the many passing boats is a good learning experience for a rower who's new to the lagoon, and good preparation for anyone about to enter the city under rowing power.

In addition to the motorized boats, several members of the GSVVM were out rowing on club boats. It was a nice surprise to run into Nereo Zane and his coach Antonino Zennaro out for a row on an orange and blue mascareta just like ours. 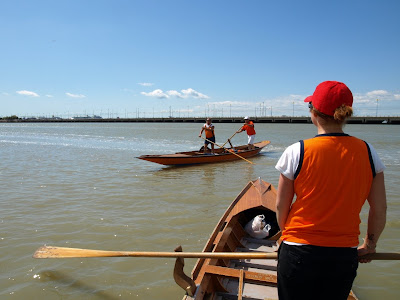 A mascareta-to-mascareta meeting in the lagoon.
We reached the mouth of the Canale di Cannaregio, waited for the right opportunity, and charged in - travelling between passing water taxis.
Taxis, vaporetti, scafi and moto-topi make the Cannaregio one of the most trafficked passages in the city. We zoomed in and out of tight spots, got waved to, and honked at. When there was a break in traffic, we took the customary "Tre Archi photo", continued rowing, and entered the Grand Canal. 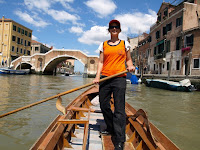 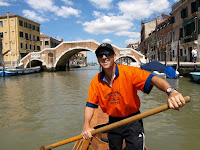 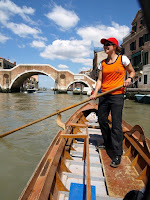 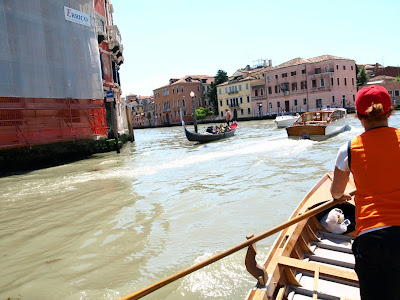 Entering the Grand Canal.
Traveling down the Grand Canal is an amazing experience for anyone. For gondola fanatics, rowing it can play out like a dream sequence.

It's all there: everything you've envisioned about being on the water in Venice is real, tangible, and passing by on both sides of your boat.

On a warm sunny day, all the palazzos are painted in sunshine, while shiny black gondolas (just like the one you row back home) are lined up by the dozen, bobbing with the waves of passing boats as the sun's reflection sparkles on the water.
Don't get me wrong: it's not all sunshine and sparkling water. There are big vaporetti, which regularly plow through, claiming their municipally-mandated right-of-way. But passing vaporetti can be fun; earlier in the day I told Megan about how, back in 2000 I was rowing one of the club gondolas with Arturo down the grand Canal, when a vaporetto pulled up alongside with at least twenty Japanese tourists snapping away with their cameras and rolling video tape. Arturo and I smiled and waved. They had no idea that one of the "Venetians" rowing was a guy from California.
As Megan and I rowed towards Rialto, a vaporetto chugged by, jammed full of American tourists, all snapping away with their digital cameras and talking about the two "Venetian rowers". Both of us busted out laughing; it was a classic moment.
From an American gondolier's perspective, the day could not have been more perfect.
It was the stuff of dreams, the kind of memory you fall back on when times are tough, and a story you wish you could pass on effectively - all the while knowing that it's one of those "you just had to be there" stories.
I won't be so bold as to compare myself with Maestro Arturo Morucchio, but it was an honor to introduce this great experience to someone else. 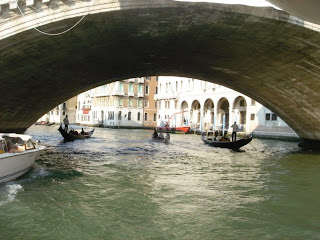 Passing under the Rialto.
In a way, passing on the dream he'd given to me so many years ago was both a way of "giving back" and reinforcing that connection I had with a dear friend who was gone but not forgotten.
And besides, it would be a shame not to share something so fantastic with those who would appreciate it so much. 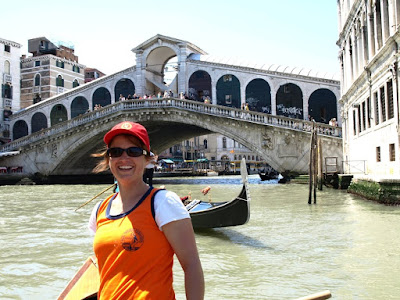 What a wonderful post! I've read it back a few times back to back initially, because it was so fun remembering, and the many details you included really helped to put me right back on that Mascareta.
The pictures are fantastic too!
I know I thanked you many times during the weekend, but wow! I just feel like thanking you again for this experience.
I wonder if it will ever feel real, like "Yeah...I did -that-" Because it still feels so surreal!!
So THANK YOU for this incredible experience, and for all the work that you do for the gondola blog!
It was great to row with you!

Wow that looks like absolute paradise. That has to be the best way to see Venice. I couldn't imagine a better way to visit any part of the world.

Are the Venetians always that open to teaching rowing to people who have an interest but little knowledge of Italian?

That has to be one of the most memorable events of a life time, rowing the grand canal, in a boat that pays its history the respect it deserves.

Its no wonder the stories of Atlantis persisted so strongly in mariner lore. Imagine being a 17th century sailor from some quiet little fishing village far away, and seeing Venice as a port of call, how could you ever begin to explain it to someone that had never seen it?

I think you may not be the first people to say "You had to be there" lol.

> Are the Venetians always that open to teaching rowing to people who have an interest but little knowledge of Italian? <

I read there is a course for Molino Stucky Hilton guests, but it's probably not a serious one. I think you need some italian or maybe spanish skills to find a sportsclub which accepts you.

The was a foreigner living in Venice, who organized rowing courses, but his webpage says the business is now on hold.

In an earlier blog post Greg wrote:
"...by far the best book for learning about how to row like a Venetian is Gilberto Penzo’s Forcole Remi e Voga alla Veneta, available at http://www.veniceboats.com/"