The Canals of Newport

Newport Harbor is a large body of water, and there are several areas that make for nice passenger cruising.
Certainly the waters around Linda, Harbor, and Balboa Islands are beautiful, and there is plenty to see there. Indeed, the first gondola in Newport, rowed by a transplanted Venetian named John Scarpa, was based out of the area we now call the "Fun Zone" - right across from Balboa Island. The "Pavillion", Newport's most recognied building still sits there.

Other canals exist in the Back Bay near the Westcliff neighborhood, and the "Rhine Channel" in the old Cannery Village area is nice for relaxed boating.
But the area of Newport that has been the center of gondola operations since the early 80's is in the west end, stretching from the Via Lido Bridge west, under the Newport Blvd. Bridge, and into the canals that encircle Newport Island. 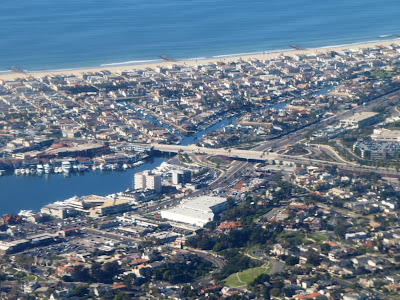 A shot of the west end of Newport.
The Lido Channel comes in from the left, the Newport Blvd. Bridge crosses over the water, and the canals surrounding Newport Island can be seen disappearing between the houses.
The Pacific Ocean lies at the top of the shot.
The early 80's saw the introduction of motorized gondolas in Newport. These vessels were often operated by, or in association with, yacht charter companies. For decades now brides and grooms have either arrived to or departed from luxury charter yachts where their weddings took place. This added feature became an appealing selling point and many charter companies saw the benefits of either owning or representing Newport's motorized versions of the Venetian gondola.
Because most of the charter companies in Newport were based in the west end of the harbor, the canals around Newport Island eventually became known as "that part of Newport where gondolas are".
To this day, gondolas operate out of the Lido Marina Village, and marinas along Pacific Coast Highway near Newport Blvd.
A selection of quality restaurants, and the close proximity to the 55 freeway have made this location appealing, and the canals there are ideal for cruising. 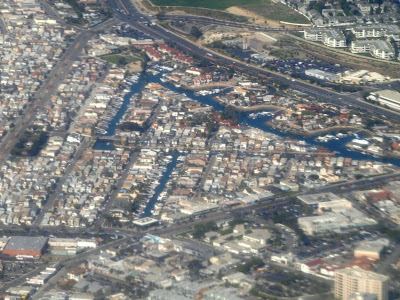 Here's another view of the canals around Newport Island. The Newport Blvd. Bridge is just out of the frame to the right. The canals around Newport Island follow it's triangular shape, with an extra canal running perpendicular towards the bottom of the shot. For reasons unknown to me, this side canal is called "The Rialto". The Balboa Coves neighborhood with it's three small marinas is located in the "Rivo Alto" canal (a name nobody around here uses, but it shows up on maps here and there).

In the 90's my company (then Adventures At Sea Yacht Charters) ran some motorized gondolas that were owned by outside entities.
These boats had modified golf-cart motors which went pretty fast and could cover long distances.
Back then we offered cruises that would include a full harbor tour. Since then those boats have either been retired or gone elsewhere. Our motorized fleet now consists of more elegant boats which are propelled by trolling motors which don't "rip down the channel" like their predecessors did. We've found that even in the motorized gondola world, passengers don't care much about speed. For many years we've also had rowing gondolas in our fleet. Both of the above mentioned boat types are better suited to operation in the canals, so that's where the majority of our cruises go now - it's the best part of the harbor for such boating, and people love it there.
In 1993 I proposed to my wife on a gondola there.

The Lido Bridge is also very popular with gondoliers, who routinely serenade their passengers while passing underneath. 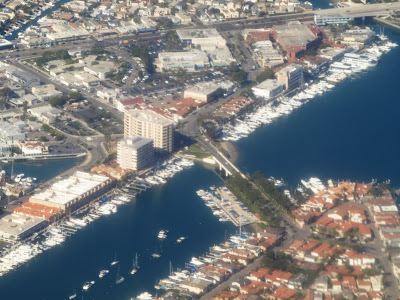 note: all photos in this post were shot through the window of a passenger jet out of John Wayne Airport in Orange County. Whenever we fly out of there, I ask my wife to book us seats on the right side of the plane. I snap in my long-lense, take aim, and hope the cloud cover won't get in the way.

Hey, thanks. That was awesome to read. I've always wondered about the area you work out of and the routes. And your directions worked perfectly with the photos.