Nereo recently sent me some boat photos, and in the mix were a few pictures of "bovoeti", along with the words:
"You have to try them one day".

I got such a kick out of it, that I requested the recipe, which he promtly sent.

I have no problem eating the stuff,
I just don't know where I'm gonna FIND it! 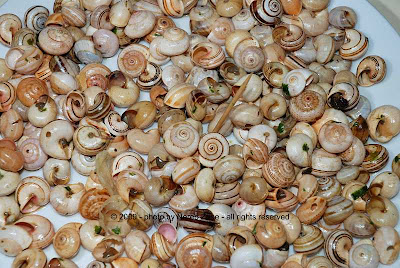 The recipe to prepare the "bovoeti" in a few steps:

Step one
maybe the most difficult in America: getting the bovoeti still alive. The tiny snail are not to be confused with those that French people call escargot (quite bigger).

Step two
wash the bovoeti under running water for a while and then let them rest in a basin with cold fresh water and salt and put a pot with cold water and salt on your hob or cooking machine until the water boils.

Step three
Take your photocamera, the additional flash and the lens for macro-photo and when the first snails try to escape from the basin take some great photos. 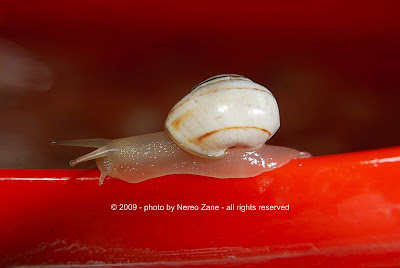 Step four
when the water boils pull out the bovoeti from the basin and put them in the boiling water. When the water boils again wait for two or three minutes, shut the fire under the pot and pull out the bovoeti from the water.
Step five
cut the garlic and parsley. Put the snails in a glass bowl, add the garlic, parsley, olive oil and mix everything until the snails are perfectly dressed. Add some salt if needed and let rest for some hours.
Step six
at dinner sit in front of the bowl and using a toothpick or a needle get out the animal from his "house" and put it in your mouth. Repeat the operation until all the snails (shells) are empty, drinking a glass of white wine time to time. Bread or breadsticks are optional.
When finished you are allowed to burp (just once) and only if you are alone.
Buon appetito my friends!
Posted by Gondola Greg at 12:05 AM