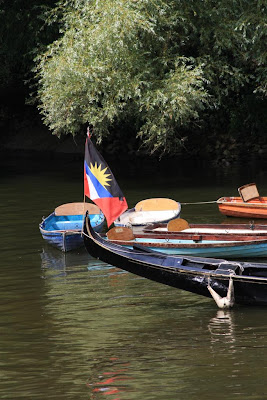 Big thanks to Elle Sandes in London for this new set of photos of the "London Gondola".

We've been checking in on this vessel for some time now, and the new owners look to be working in earnest to return the boat to her former glory.

On Friday I received an e-mail from Elle with these images.
She's quite the photographer, and has produced a number of great images featuring London's small rowboats, so it was fitting that these photos show the gondola rafted up with more English rowboats. 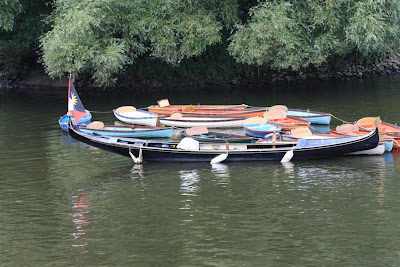 Elle writes:
"Going over Richmond Bridge, and after a long while unter tarp for the winter, I saw her!

I was pleased to see the flag up as well. Not sure what the plans are for now, but as you can see, she is situated amongst some of the row-boats that are currently not in use. I think the company is using a different fleet this year. The boats get moored different places each year.

Anyway, as you see, there are no carvings or ornate trim, which is a bit dissapointing, but none-the-less, its still a beauty."

Up for discussion is the curious uncarved trasto da prua.

Border-trim on the bow can break away, so with the age of the boat I'm not surprised that it's missing (in fact that same trim can still be seen on the stern deck), but the trasto carvings are almost always present on a livery gondola.

A smooth trasto da prua can often indicate that the boat was originally a racing gondola - either from the Commune di Veneza, or one of the many rowing clubs in the Veneto.

There's also the possibility that someone has replaced that part of the boat with new wood, although such a repair is quite extreme and doesn't happen very often.

In my post from January 27th, 2009, the gondola had no ferro and there was talk about how the owner would be looking to replace it. Here we see that the boat does have a ferro, the design and materials used are still in question - it appears to be home-made, but not too terribly far from the original, with the exception of color of course. 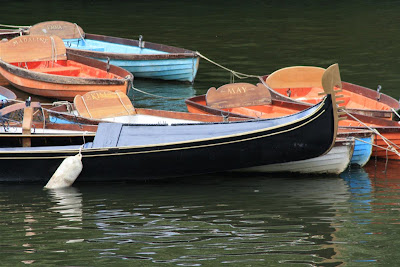 Attached to the tail we see an unusual flag.
Anyone who's spent time in the Carribean may well recognize it as the flag of Antigua. I'm not sure of the connection here, but it is a pretty cool flag. 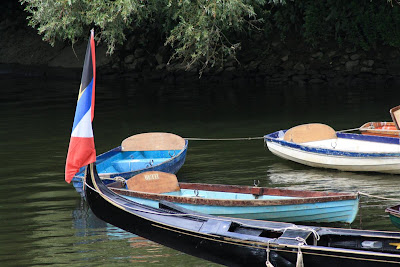 Many thanks to Elle for giving us an update. We look forward to seeing more of this gondola.
With kind regards to the dilligent folks who are restoring her,
Buona fortuna!
update: many thanks to Andrew McHardy for pointing out that it's the flag of Antigua, not Aruba...and for not calling me a jackass in correcting me. Thanks also to Tim at Sunset Gondola for passing along the message.
Andrew, we miss you here. I hope you and your family are well in NZ.
If you run into any punts down there - take a picture.
I hope to see you back in So Cal for the next pilgrimage to Captain Jack's!
Posted by Gondola Greg at 12:11 AM

Labels: boats in the UK, maintenance

Stange photo detail: the usual poppa forcola position is not there, but it looks like someone placed two platforms for metal rowforks in the passanger compartment? Maybe they row it "due mascarete" style, but both oarlocks are located so much forward it must be difficult to steer?

I would also note this boat appears a bit flatter (less crescent shaped) than usual venetian tourism gondolas or maybe it's just an optical illusion? With regard to shape, could it had something to do with traghetto, hence the lack of an original ferro and carvings?

My guess:
This was a passenger gondola.
Trasto di prua has been replaced.
Ferro looks small, maybe from gondolino.
Gondola does look flatter, my guess is its a Tramontin gondola, less high in the bow and stern than other builders.

Every gondola, after years of usage gets flatter. Gondolieri usually ask the squeri for applying a layer of fiberglass to their gondola and then sell her.
The layer of fiberglass helps the gondola to keep her original shape.
I think this gondola has not been fiberglassed.

It's definitely not robust enough to be a traghetto boat.
I'm not sure of the builder.
Nereo's right: gondolas fight an ever-so-slow losing battle with gravity, eventually becoming "flatter" as the ends come down. Cracks develop in the seams on deck, and the shape becomes a little bit less crescent-shaped as the years go on.