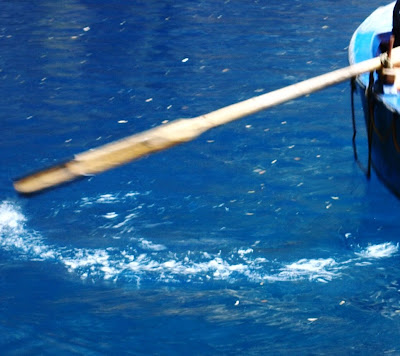 Some time ago, Sean Jamieson and I were talking about the Gondola Blog and he said:
"So basically you just go places, row boats, and write about it".
This wasn't exactly the way I'd envisioned the whole thing.
It seemed to downplay the significance of things.
But the more I thought about it, the more I realized he was pretty much right.

I go places, row boats, and write about it.

Not very important, but not a bad deal either.
It's pretty darn fun, and as a gondolier, there aren't that many things I'd rather be doing.

So how does a guy who "goes places, rows boats, and writes about it" come up with a plan?
Yes, sometimes I put a lot of thought into it, say to myself: "I need to go to such-and-such-place, find the gondola I've heard about and row".

Sometimes I have to talk my wife and family into stuff.
Quite often, my wife (who is a travel agent) will say something like:
"Hey Greg, wanna go to (insert any random place here)?"

And I'll reply with either:
"Oh, yeah! Hey, we could visit the gondola that operates there."

…or simply:
"Are there gondolas there?" Either way, she will roll her eyes, and remind herself that she's a "Gondola Widow", and then count her blessings that I'm not hopelessly obsessed with Ferraris, gambling, or other women.

And while there are times when I build a trip around what I call "gondola tourism", or squeeze a visit to a boat operation into an existing trip, there are also times when something will just fall into my lap.
Such was the case with the Melissani Cave. 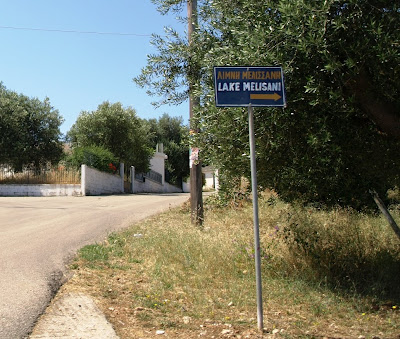 The Melissani Cave is rather dificult to find, but with a good local taxi driver, who knows the area, you can find it.
We arrived on shore at Argostoli, the capital city of the Greek island of Kefalonia.
This was the third Greek port we'd visited on the cruise we took after Vogalonga, and aside from finding the best gyros on the island for lunch, I had little on my agenda for the day.

Then I heard about these rowing boats that gave a tour through caves.

Sound like something that would interest a gondola fanatic?
Oh yeah!

We talked to a few different cab drivers, found one who had a good command of the English language, and made a deal.

We drove across the island to the town of Sami, traveled a few kilometers further to Karavomylos, and ended up at the receiving area of the operation.

After buying tickets (7 euro for adults, 4 euro for kids), we followed a staircase down that brought us to the top of a diagonal corridor - at the end of which we could see the turquoise water of the cave and boats crossing in and out of view.

This wasn't my first "underground boat ride", we'd done this type of thing a few years back in Kentucky (see part one and part two), and of course the Blue Grotto in Capri was a highlight of a vacation to Napoli in 2006 (read my post from Jan. 3rd of '08).

Like Napoli, the boatmen stand and row with two oars, in a forward-facing position. It’s not unusual, really – I’ve even seen some guys do it in California.

Here’s a video clip of our entry into the location:


video by Elisa Mohr
In my next post we'll take a look at what's at the end of the tunnel. 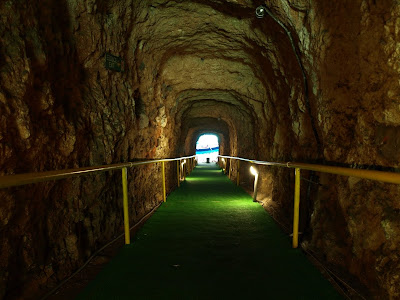