Benchwarmers and a Beautiful Boat 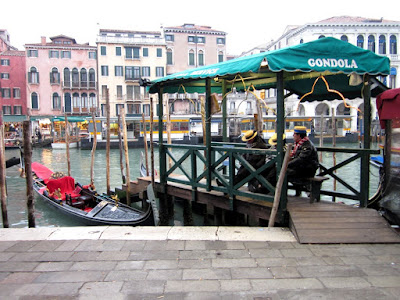 Just a stone's throw away from the Rialto Bridge on the San Polo side of the Grand Canal, tucked between the crimson awnings of outdoor dining areas, you'll find a gondole servizio that's in an eviable position.
Enviable because the guys here get to row under an amazing bridge anytime they want to.
The acoustics under the Rialto are great.
I've belted out in song more than once while passing under her archway - doing so in a rowing boat with fellow club members is fun, but I've found that singing from the bow of a vaporetto...doesn't quite get the same response.
A drawback of this area, of course, is that these guys also operate in one of the most heavily trafficked areas of the city, but I'm sure the benefits offset the challenges.
I'd also veture a guess that when it comes to handling chaos while rowing passengers, these guys are among the best.
I've snapped a few photos of another small servizio with a similar green awning just a little further down the fondamenta; you can see them in "Pride in Presentation at Riva del Vin", and like the guys at that location - these gondoliers look like they take presentation seriously.
Even when it gets cold.
Tamás shot these photos in November of this year, which explains why the three guys huddled on the bench are wearing a lot more clothing (and a lot more black). 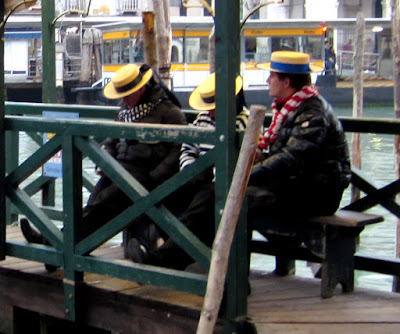 Black pants are standard all year long, but black ribbons on the hats tend to show up during colder months.  Gondoliers often swap out their white marinere for black ones - they have the same sailor collar and buttons, but are long sleeved.
On this day in November, however, it must have been much colder because two of these guys looked like they were ready for a ski trip.
I think the stripes worn around the neck were a nice touch.
Now let's take a look at that gondola: 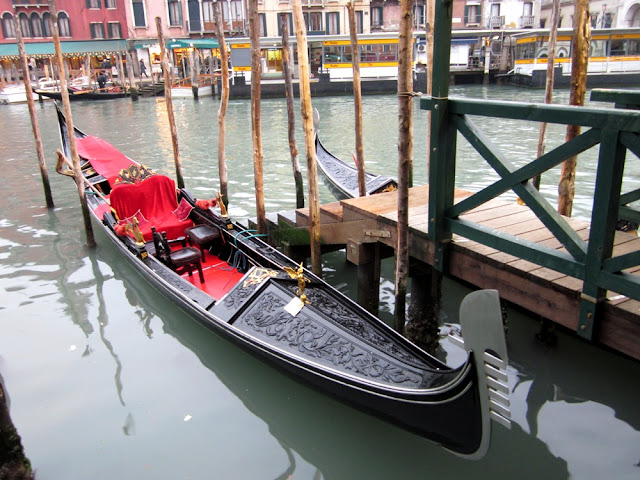 Yes, she's beautiful.
There are a few places in Venice where you're guaranteed to find the most beautiful gondolas - the "rivas" south of the Rialto are prime examples.
This one is a "wedding gondola", you can tell by that fully carved deck. 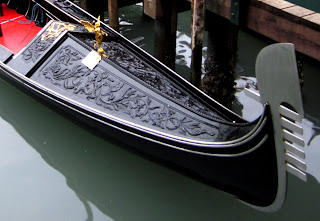 Yes, I'd say that the intagiadòr who showed up at the squero with his toolbag, spent a lot of time on this one.
The gold plating on the statue sitting in place of the canon (usually a tiny vase) shows that the gondolier isn't afraid to spend some money to keep his boat looking her best. 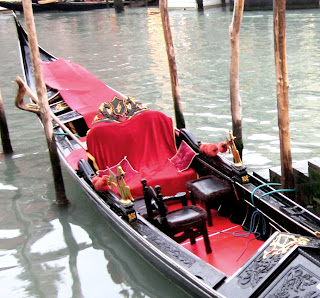 And as we look at the passenger area,
we see more evidence that this boat is well cared for.
The seat has a nice red cover with matching pillows - all trimmed in gold.
Deck carvings are also present along the rails. 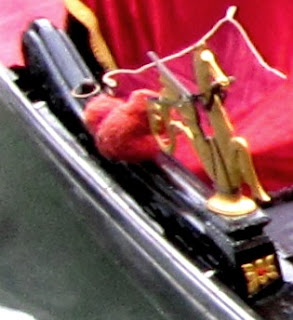 The cavalli appear to be plated in gold as well,       but it's hard to be certain.  They also look like they have some sort of "wing" trailing behind (above the tail).    Red being the theme color, the pom-poms follow suit.  And while it's difficult to see much of the pusiol (arm piece), the eight-leafed flower in gold with the red center is perfect for the boat.


Perched atop the seat-back, we see a nice scimier.
The central shield isn't uncommon, but the shape of the shield is unique.
My guess is that the detailwork in the shield is specific to the owner of the boat.  What really caught my eye was the fact that the sheild was flanked not by cherubs or angels, but horses. 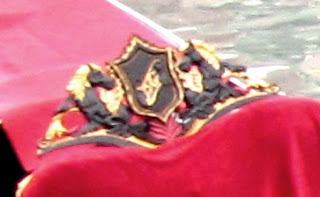 Working back, we see that the forcola has also been visited by an intagiadòr (or a remer with a flair for carving in the intagiadòr's style).
We've looked at a lot of really nice gondolas here on the blog.
Each one of them is unique and different in her own way,
but there is one common thread:
Of all the top notch gondolas we've seen,
each and every one is obviously someone's pride and joy.
Posted by Gondola Greg at 12:05 AM

Labels: in Venice, traghetti and servizi