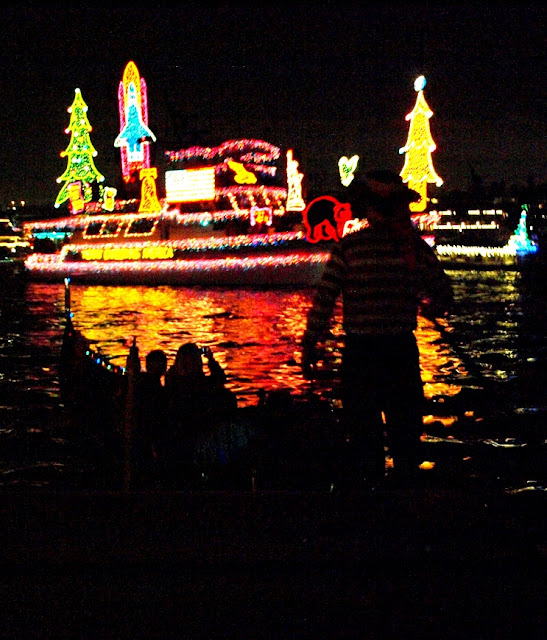 photo by Steve Elkins
On Sunday night, the final night of the boat parade in Newport this year,
I caught some decent video footage.
Steve Elkins and I also shot a few photos.
The lighting during this event is "challenging" to say the least.
Everything is moving, including the gondola.
And then there are all the other spectator boats, so to get good photos or video, a gondolier has to be very good at multi-tasking.

As the parade stacked up this year, the first parade boat, which followed the red Harbor Patrol boat, had an eye-catching light display on the bow that looked like it had been stolen from an alien spacecraft. 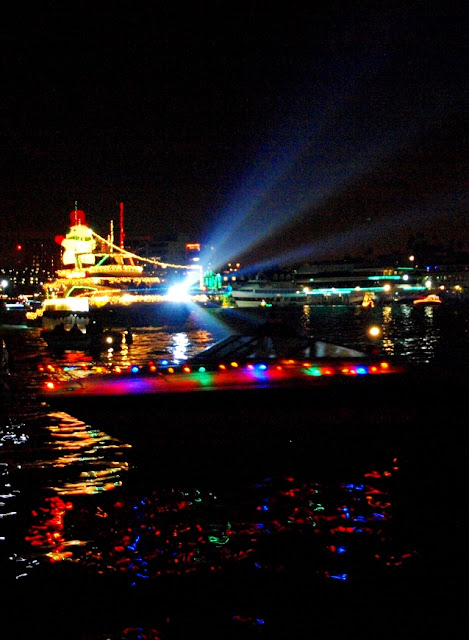 "Close encounters" of the lead boat.
Grabbing a snapshot of the lead boat was all I could accomplish,
as I was jockeying for position with a few other boats,
and safety always trumps photography in my book.

As the parade passed by, I fished out my video camera and shot this clip:

Yes, yes, there IS always some guy with a microphone who,
upon seeing my gondola, feels the irrepressible urge to deliver his best unrehearsed version of a song he's sure all gondoliers sing.
The variety of boats is always an interesting aspect of the parade.
Here we see a motor yacht, then a sailboat, and then a small boat that most have at least three generators on board to power all the lights:
One of the most popular boats in this year's parade was this one: 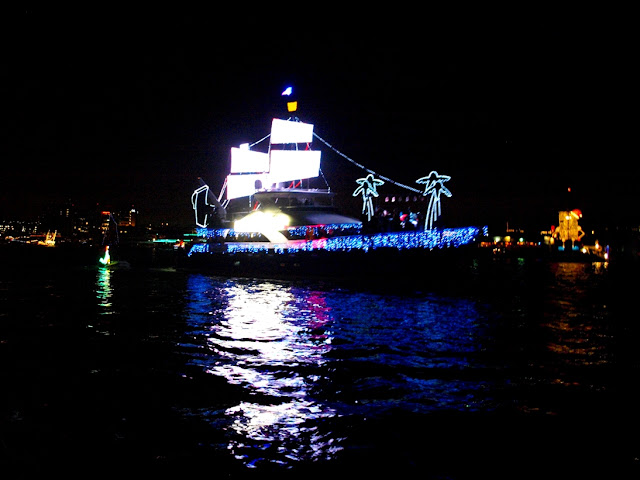 I didn't get the name, but I was able to shoot both a photo and some video - and this one is better appreciated with video.
The bright rectangular "sails" changed color and flashed in stripes.

Did you catch the crocodile trailing behind at the end of the video?
Some of these boats plow by quickly, leaving some nice moto-ondoso for a gondolier to handle.
Sure, the parade is supposed to move at a more "leisurely" pace, but there are times when one boat slows down a little, and then decides they need to catch up.
That's when it gets dicey. 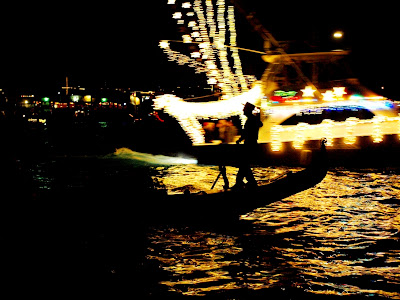 photo by Steve Elkins
All the parade boats are well lit.
Many of the participating boats have music as well.
Combining the  music and lights isn't something we see much of,
but when we do, it's usually pretty cool.
Here's one that's "Snoopy cool":
Some parade boats have obvious themes.
I think the Spongebob boat won in their category this year. 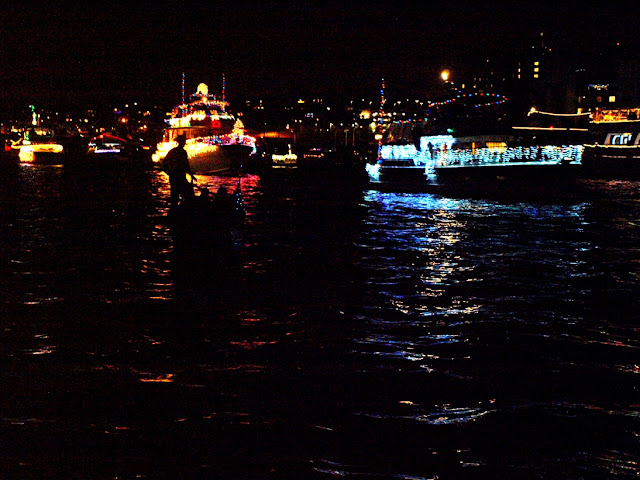 photo by Steve Elkins
You don't have to have a huge vessel to make an impression in the parade.
Here's one example of someone who worked well with what they had.
Many of the large fishing boats take part in the procession.
These are "cattle boats", also sometimes known as "head boats" because you can go fishing without chartering out the whole vessel
(admission is a certain amount per head).
In this case folks pay per head to be in the parade.

As this one passes by and turns the corner, you can hear her engines well.
These boats specialize in open water trips that require a lot more power.

A special thanks goes out to Steve for taking some great photos,
but more importantly - for being such a good sport about it.
I rowed over to his gondola, handed him my camera,
and asked him if he'd take a few shots for me.
When he agreed, I proceeded to give him way more directions than he was probably expecting. 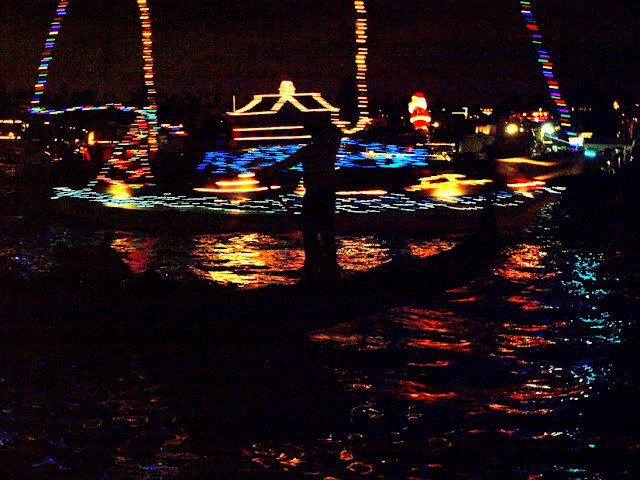 photo by Steve Elkins
As always, it was exciting to be out on the water for the Christmas Boat Parade this year, and my passengers will all tell you that there's no better way to see it than from a gondola.
Not only can you get remarkably close to the procession, but a lot of parade boats see the gondola and speak (or sing) to us over the P.A. system.
When a fully lit mega-yaght cruises by, with Santa Clause on the bow holding a microphone, and Santa says "Merry Christmas to the folks on the gondola" - well, for my passengers, it's something they'll remember for a long time.
Posted by Gondola Greg at 12:20 AM

Amazing!! nothing else to say. Next year I want to participate.
Merry Christmas and Happy 2012 to everybody there.