What is a "Wedding Gondola"? 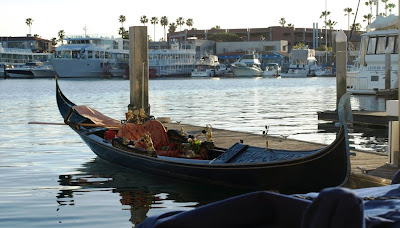 Over the years I've heard a lot of things about wedding gondolas - some true, some not quite accurate.
As the owner of one, I must confess some bias here; but despite that, one must admit - they are striking in their appearance, and prized by those who own them.

Contrary to a belief I've heard mostly in the US, they are not called wedding gondolas because weddings take place on-board.
This has been further confused because here in the US we do perform wedding ceremonies from time to time on gondolas, and yes, even on wedding gondolas. The wedding gondola (known in Venice as a "gondola da matrimonia") has traditionally been the preferred mode of transport for couples getting married in Venice. Customarily, they are carried to and from ceremonies, and in very traditional scenarios, where couples participate in a church wedding AND a civil ceremony (getting married both in the eyes of the church and the state), wedding gondolas ferry the bride and groom between the two weddings. 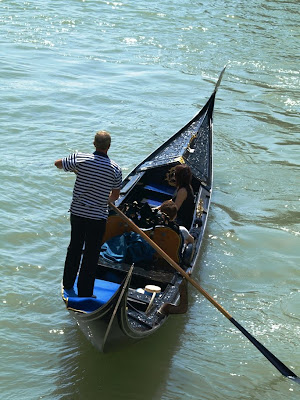 Carvings
As with everything, there are plenty of opinions, but the most popular belief is that a wedding gondola must have a carved deck. Sure, almost every gondola has some sort of carving on her trasto da prua, but only wedding gondolas have additional carvings both on the bow and stern decks.
In fact some also have carved rails and other areas which are smooth on a standard gondola.

Most of the carvings on a gondola are performed by an artisan known as the intagiadòr, who in my opinion, has one of the coolest jobs in Venice. While most folks associated with boatbuilding work in their own shops, the intagiadòr comes to your shop. He brings his own tools, performs the job, makes the boat look incredible, and then he's done.
Conceivably, an intagiadòr could function with a bag of tools and little to no overhead. 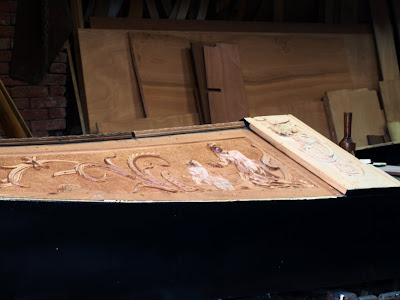 Close-up of a wedding gondola at Squero San Trovaso in the process of having her deck carved. Notice the different colors of wood; typically a gondola is built using eight different types of wood - this means that an intagiadòr must be skilled in carving different woods and adjusting to the varying grains and densities.
Deck carvings range from scrollwork to intricately carved scenes featuring people and sea creatures. One of the most famous intagiadóri of all time went by the knickname of "Il Santo".
"Il Santo", or The Saint was known for his deck scenes featuring allegorical characters such as Neptune and mermaids.
Often the raised areas of the carved deck are painted in a high-gloss black, while the smooth background areas are painted in flat black - sometimes mixed to be a very dark gray (close enough to be considered "black", but with enough contrast to accentuate the carved areas). 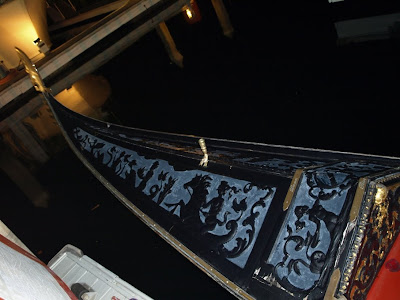 Here's a rare shot of my wedding gondola just prior to a full restoration. After almost ten years in the sun, the "flat black" had degraded to wht you see here. Notice the allegorical characters - carved by "Il Santo".
Guilding and Plating
In Venice, wedding gondolas are usually owned by individual gondoliers, who treat them like the Ferrari in the movie "Ferris Bueller's Day Off". Because they are privately owned, these gondolas often have parecio of a more premium grade as well.
Cavalli are usually more robust, gold plating isn't uncommon, the pusioli tend to be unique and luxurious.
These gondolas will sometimes have impressive chairs which have also been carved to one degree or another, the decorative piece known as the "scimier" which sits atop the seat-back,
is usually present and more pronounced than on a standard gondola.
Fodra boards (those facia pieces which mount on the inside of the passenger area just below the rail), and the portela tend to be more impressively carved, and many of the gondola's removable parts will have some kind of accent in gold-leaf.

Typically, by the time a gondolier has established himself enough to commission his own gondola to be built, he has a pretty good idea of how he'd like his "ultimate gondola" to look.
If that guy has the means to pay for it, he does so, knowing that not only will he gain some respect among his peers, but he's more qualified to park that pedigreed beauty in front of one of Venice's premier hotels or restaurants, and a beautiful gondola with all the trimmings can also be an edge in the business of selling cruises.

A while back, Tamas wrote:
"Why isn't every gondola a wedding gondola? I mean rich decorations are probably a competitive advantage even in regular tourist use, which more than off-sets the higher investment and the extra maintenance."

I suppose if every gondola in Venice was privately owned by a successful gondolier, we'd see more of them, but gondolas aren't all built-to-order for a single owner; many are owned by cooperatives. I've even heard that some are treated almost like taxi cabs - with gondoliers in the traghetto rowing different boats throughout the week. 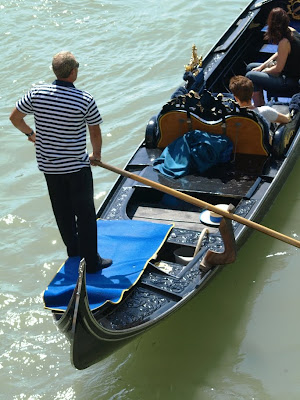 Here's a closer look at the stern of that wedding gondola shot from the Rialto - notice the carvings, not only on the stern deck, but also on the railing area known as the "nerva".
Extras like specialty carpets also show up on these boats -
the blue tapeto with yellow trim was probably custom made for the boat.
The additional weight associated with the parecio can add to the overall weight of the vessel, but nothing a skilled gondolier can't handle...especially if it means looking good. Some of those cavalli can really weigh a lot when they have to be carried by hand,
I believe most cavalli of such heft and value are secured into the boat, sometimes locked in. As for balance, they sit on either side of the boat and are situated fairly central between bow and stern.

One probable difference between the standard servizio boats and a decked-out wedding gondola would be the added work associated with dressing the boat, stowing the "good stuff" each night, and keeping it all shiny. Some of the larger cavalli not only cost a lot more, and weigh a lot more, they cost a mint to get plated. In order to plate a brass seahorse, siren, or trumpetting angel, it needs to be polished and prepped, plated in nickel, and THEN the gold plating goes on.
The plating alone can cost upwards of $800 per horse.

The care required to keep the carvings painted involves careful handsanding and two different types (or mixes) of paint.
The same holds true for areas that have gold-leaf. 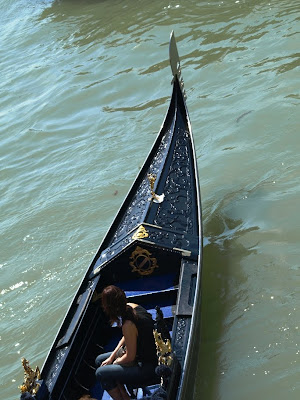 Looking at the forward half of the wedding gondola shot from Rialto, we see gold-plated cavalli. We see more carvings, both on the bow deck and nerva. We can also spot gold-leaf, both on the portela and at the top of the trasto da prua.
On top of all that, the owners of these premium gondole often try to out-do each other.
All told, a wedding gondola parked in front of the Hotel Danieli or Bauer, or along the fondamenta near the Rialto, can reach ridiculous costs, but the benefits must outweigh the drawbacks, otherwise we wouldn't see any of them floating about. 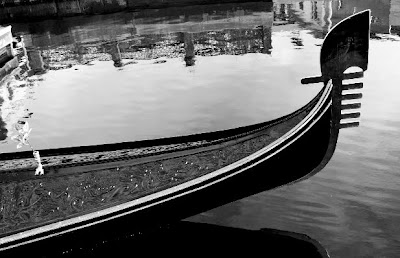 Another shot of the prova of my wedding gondola here in Newport Beach. After restoration we weighed the options and decided to go with a full coating of gloss. Some time in the future I'll opt for a non-shiny "flat" finish in the background areas - maybe when I have fewer boats to maintain.
With or without the contrasting paints, carved decks attract attention (and dust).
Posted by Gondola Greg at 11:41 PM

I don't think the work of an intagliador's work is simple. He can't make mistakes and wood, unlike metal, can give you suprises while chiseling, a knot occurs and the bump can ruin the whole table. They must have good nerves and steady hands, like a surgeon!

BTW, many shoes made in Italy have richly decorated upper parts, where the leatherwork is almost as intrictate as the carvings of a wedding gondola. I wonder if there is a connectin? Did one influence the other?

Recommend shallow water for such ceremonies! Some may suddenly decide to jump overboard when they hear: "Do you want to marry this woman / gentleman?"

THANKS for the wonderful photos and the fine descriptions Greg. What beautiful boats.