The Book was Closed in Rhodes

Last June my family and I stepped off a cruise ship and went ashore in the Greek port of Rhodes.
Located in the south-east region of the Greek Isles, Rhodes is closer to Turkey than the Greek mainland. Many people recognize the name of Rhodes, because of something that was there a long time ago - a "wonder". The "Colossus of Rhodes" was a huge statue that stood at the entry of the harbor as a tribute to the Greek diety of Helios.

The statue actually stood for less than sixty years before it tumbled; a casualty of the earthquake of 226BC. But when it stood, the Colossus of Rhodes was impressive - over 30 meters high it was the highest of all statues during ancient times.
This statue of Helios was so impresive that it was chosen as one of the Seven Wonders of the Ancient World.
I believe the reason most folks have heard of Rhodes is the Colossus.

When my family and I went ashore we hunted around until we found a cab driver who spoke english and had a good disposition, then the tour began.
As we were driving through the port we stopped at this church, which had an interesting carving on the outer wall of the campanile.

I shot this first photo from inside the taxi: 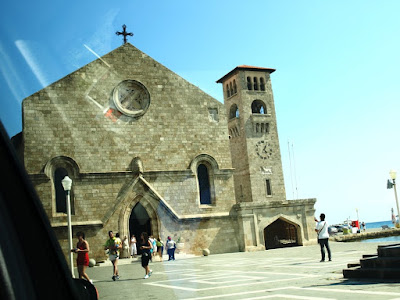 As I looked closer at the bell tower of the church, I noticed something familiar.
Anybody recognize this: 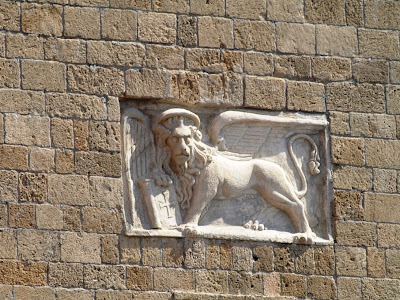 Yep! The Winged Lion is Venice's most elegant and classic way of saying "Kilroy was here" (an American graffiti which is believed to have originated in WWII).
I saw this and had to step out of the cab and change lenses.

I'm not sure exactly when this releif was put in place, but looking at it we can surmise a few things for certain:
Venice definitely ruled here once,
and when they did, they did so either by force, or without the cooperation of the people.

The Lion of St. Mark is always depicted holding a book.
In some cases the book is open, in others it's closed.
In Venice the book is always open unless you come upon something that was carved or printed during wartime - in which case the book is closed and the lion also brandishes a sword.

Outside Venice the Winged Lion can still be seen in places that were once Venetian territory.

I belive it was Bob Easton who explained to me that in places where the Venetian rule was welcomed, the book is open. But in places like Rhodes, the Winged Lion holds a closed book, signifying that while Venice came in and took control, the takeover wasn't exactly received with open arms.

Our taxi tour of the Island was great; it brought us to ancient ruins, cliff-hugging settlements of alabaster-white buildings, and the best gyros I have ever tasted. Before we left the port town I saw other Venetian iconography on the crowns of municipal buildings.

I'm pretty sure I'm only echoing the thoughts of many people now, when I say:
I can't help but wonder sometimes,
what it would be like if Venice had lived on.
If Napoleon had chosen not to bring it down,
or had failed in his attempt to defeat La Serenissima,
What would have happened?

Apart from all the speculation,
we know that Venice did once rule in Rhodes.
And when the Lion of St. Mark emblazoned the campanile of this church...the book was closed.

Greg,
Thanks for the photo. The lion with closed book isn't often seen. This one's a beauty.

The Christian conquest of Cypress and Rhodes in 1522 is the likely reason for this closed book depiction.

> what it would be like if Venice had lived on. If Napoleon had chosen not to bring it down

The modern history of Venice is probably the best imaginable outcome. The water-city was very LUCKY to fall without a shot in 1797.

It's a bit technical, but a time later a french officer named Paixhans revolutionized artillery with oversized powder chambers. Luckily this tech was not yet available to austrians during the siege of Venice in 1848-49. When it was used against the Crimea in 1855, however, strongest fortesses were levelled in hours and from long distances.

If the Venetian Republic lasted longer and became involved in the austro-french wars or the italian unification war, modern guns would have turned the city into marble dust for sure.

Otherwise, even if venetian independence lasted longer and the Serenissima possessed great wealth, the city would have been "modernized" with all kinds of civilizational and scientific advances of the late 19th century, so as to become unrecognizable. Progress, rather than war, could have erased the palaces and rii.

A lot of late-1800s european cities abandoned or buried their canal systems in the name of progress, including my Budapest and the result is dust, smog as well as urban noise.

In contrast, Napoleon eventually handed over Venice to the austrians, who were so conservative and tight-fisted, they barely changed anything inside the city.

If Provenance took good care of Venice for the past 1100 years, we can hope the current population crisis will be resolved as well!

>Christian conquest of Cypress and Rhodes in 1522

Cyprus was annexed by Venice via diplomatic means when Queen Catherina Cornaro resigned in 1489.

I think Rhodes was a crusader knight island, not a venetian base. Maybe you thought of Crete?

(There are myriads of islands in the east Mediterranean Sea, the greek and the turks still continue to quarrel over possession of those.)