Getting to the Bottom of Things

photos of this segment courtesy of John Kerschbaum at Gondola Romantica. 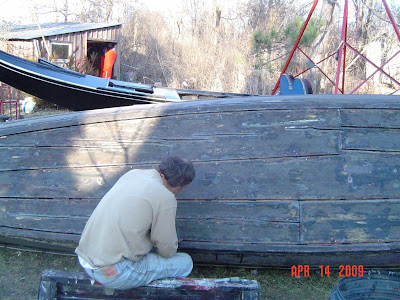 As gondola operators, we spend a lot of time and attention making sure things look good and function well above the waterline. But anyone who's ever taken care of a boat knows that if you don't keep the "underwater part" in shape...soon the whole boat will become the "underwater part."

The trick, sometimes, is getting access to that part of the boat. First, you must remove the boat from the water - that's a given. For discussion sake, I'm going to focus our attention today on rolling the boat over on her side. Sure, it's possible to raise the boat up on stands or blocks to get to the bottom, but the Venetians typically choose the lateral roll, so that's what lots of gondola owners in other places do too.

In my recent post "Hoisting with Passengers", Bepi of Sunset Gondola left a great coment; part of it was "when it comes to how the Venetians prop up very large vessels for repair, with a few sticks and wood blocks, I stay far away."

Indeed, anyone who's spent any time around a Venetian squero or rowing club knows what Bepi is talking about.
Photos of one such display can be viewed in June 14th, 2008's post "The Red Racing Gondola".
And actually, the club members who propped that boat up used a lot more support than most Venetian boat-proppings I've seen.

John Kerschbaum in Minnesota has a fairly routine ritual of boat prep that he and his staff go through each year as launch time approaches.

Here we see that attention is paid to both the outside and the inside of that part of the boat which sits in the water. 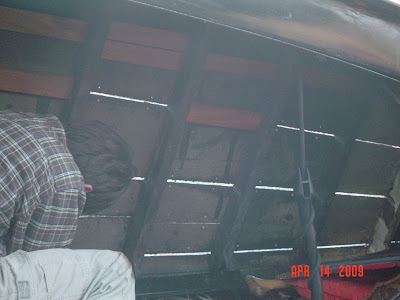 establishing a support system that can be trusted is important not only for the safety of your boat, but for you and anyone else who might be sitting, crouching or assuming any other positions near the boat that might prevent you from leaping away from a falling boat. planks or poles to prop-up, as well as straps or ropes to tether-down, are both useful and can make a big difference in the time and energy put into a job (knowing that your gondola is less likely to "decide she wants to go somewhere" on her own). 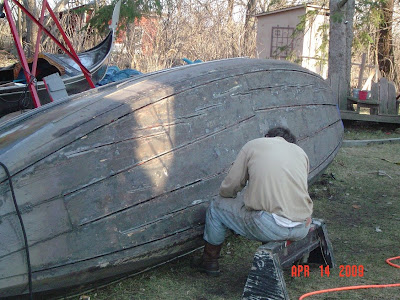 Of course it's important to show your underwear while performing such an operation too.

Now let's take a look at how they do things in Venezia.

this photo sequence by Bob Easton
Here are two images from a series of photos Bob shot from across the canal known as the Rio di San Trovaso as some squerarioli tipped up a gondola at Squero San Trovaso. The full series was posted in mid-August of 2008 and is entitled "Recent Activity in Squero San Trovaso"

After pulling the gondola out of the water using metal rollers that can be placed on the ground, the guys placed a small sawhorse (known as a "cavalletto") under the prow and rolled the boat over, placing a plank diagonally like the kick-stand on a bicycle to keep her up. 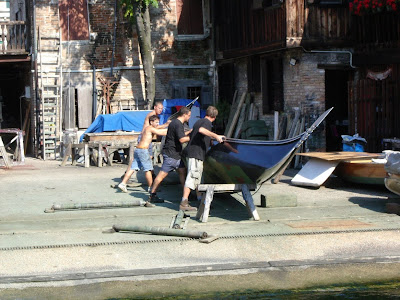 The squerarioli demonstrated with this boat, and then another (in Bob's full sequence), how easily a group of guys can move these boats around if they know what they're doing. 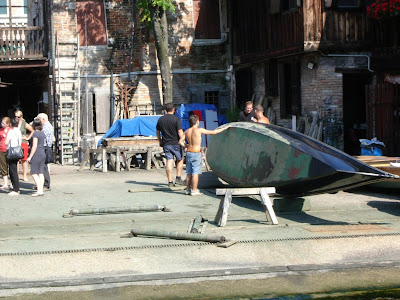 Up in Denmark, Simon Bognolo and his father maintain their gondola "Stephania" with dedication...and a clever use of old tires! Here's a photo from their spring launch-prep. 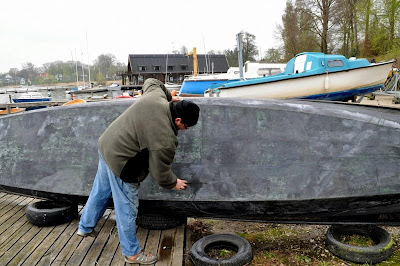 photo by Simon Bognolo
To view the website for Denmark's only operating gondola, go to:
http://gondol.dk/

Meanwhile, sometimes a gondolier hasn't got a crew of guys or a trusty piece of lifting equipment.
Sometimes you've just got to get creative.
Sometimes you've got to employ unusual things to get the job done.
I couldn't publish a post here about tipping and lifting gondolas without including this masterpiece. 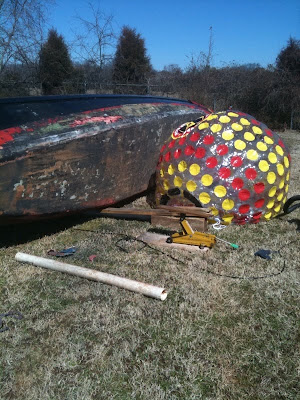 photo by Robert Dula
Many of you probably remember seeing this image and reading or taking part in the "What the HECK Happened Here?!" forum in March of this year.
Roberto, who has recently re-launched an operation in New Orleans gets the official Gondola Blog "MacGyver Award" for his use of:
a small floor-jack,
giant beach ball,
and a shop-vac set on "blow".
I hope you've all enjoyed and possibly even learned something from this study of a unique boat-rolling procedure. If anyone has stories, photos, or video of their own on the subject - I'd love to see them.
At the end of the day, we're all just figuring stuff out together.
Posted by Gondola Greg at 2:01 AM

That gondola is very authentic: she even has venetian blinds for a bottom ... allowing the Sun to shine through the slits.

Must wonder how much manilla and tar is required to wad her waterproof? Does the wood swell a lot after launching?

The planks do swell when fully wet, but first the seams are filled with a material that helps keep things sealed once the sweling has taken place. Gondolas are expected to leak quite a bit after they've been out for a while. It can be a nervous period for a new owner.