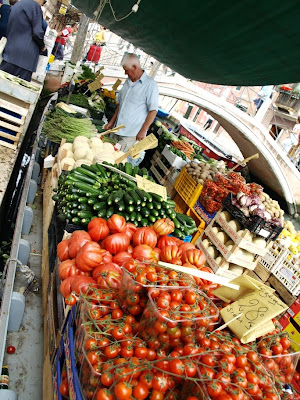 Most landmarks are static, unmoving, they can't just "up and leave". A single and mobile boat doesn't often get mentioned in official travel guides.
And while this isn't one of Venice's greatest icons, it has been recorded by several travel publications, and thousands of tourists over the years, as something worth seeing.

The produce boat, which sits moored along the Fondamenta Gerardini is a throwback to time when most Venetians didn't need to go to a store to buy their fruits and vegetables.
Each time I've visited Venice I've seen a boat here with a guy selling a "veritable cornucopia" of produce. Sorry, I just couldn't pass up the chance to use those words in a post. 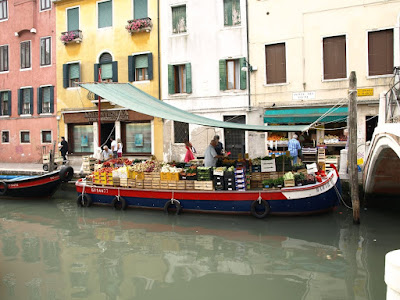 Most of the photos I've seen on the internet, taken by a wide range of photographers (from tourists to pros), have shown the same boat, while others seem to be the same boat, but with a slightly different paint scheme and the same name. My guess is that it either IS the same boat, or there's more than one produce boat in the rotation. 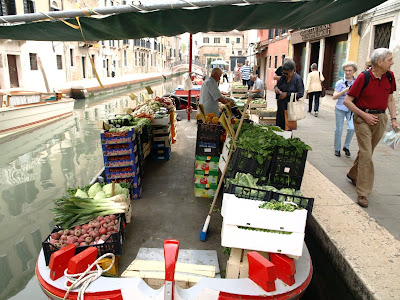 The boat in question is easy to find:
simply traverse from Campo Santa Margherita to the smaller Campo San Barnaba and you will invariably run into it. Chances are that you'll cross the Ponte dei Pugni, which the boat is moored right next to.
Standing on the famous "bridge of fists", I shot a few photos and the vendor on board noticed me.
Maybe he was having a bad day,
maybe I reminded him of someone he didn't like,
maybe I was the 467th person that morning to take his picture,
or maybe it was the spirit of the Ponte dei Pugni,
whatever the reason, he decided that he didn't like me very much.
Here's a photo taken at the moment he made up his mind. 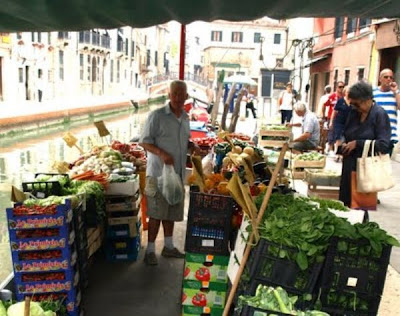 Uh-huh. That's genuine irritation.
It wasn't outright hostility, he just had a thing about me taking pictures of him...or maybe it was his vegetables.
I tried to sort of play-it-cool from that point on, but the jig was up.
The produce boat guy hated me.
I decided to get one more photo and scram before he dragged me up on that bridge for some good old fashioned pugilism followed by an official "flying baptism". 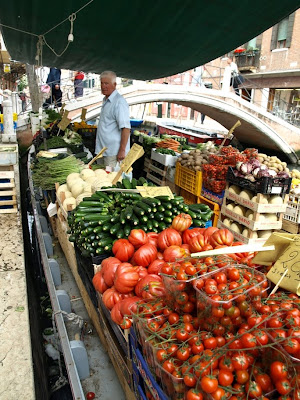 And he looked like he was more than motivated to do it.
Here's a close-up: 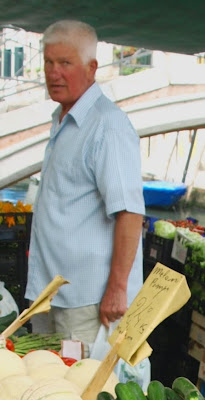 Yep, that's not a friendly look there.
I think I heard him muttering something about my relatives and some "dead dogs". I'll have to find out what that means.
Posted by Gondola Greg at 11:51 PM

Maybe the guy was breaking some business regulation (Italy is quite bureaucratic with millions of rules, just like most of Europe) and he didn't like you producing photo evidence?

Maybe buying something would have helped change his mood? If he still had that much unsold produce onboard that was probably not a good day for trade.

By the way, was that a boat or a barge? For me, there is no visible sign of engine or controls on the deck and the mast appears to be sunshade use only.

It's a bragozzo modified to be a open-space (fruits and vegetables) shop. The man isn't breaking any law though. He's running his business since several years that way; maybe he's got tired to be the target of so many shots by Greg :-)

And he probably said something like "To morti cani...." or "I cani de to morti". I have bought stuff from him as I shop around Santa Margherita when I am at home in Venice. Sometimes people just get tired of being targets of countless pictures in Venice. They start to feel like the tourists think Venetians are there only to be in pictures. Believe me, if he had known of your dedication to gondole and all things Venetian, he would have been frendlier.

Thanks for your kind words Giulio, as well as for sharing your experience with our friend the fruit and vegetable vendor.