Adventures of the Lead Boat - The Row

The conclusion of our adventure leading the boat parade on December 13th in Huntington Harbour. 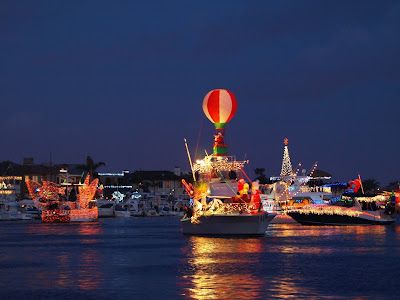 The Huntington Harbour Boat Parade, like pretty much all other boat parades, has a sort of "mulling around" period before the start. Everyone converges on the starting area and waits for the signal to begin.

That night as the five of us (four rowers and one french horn player) waited, we surveyed the various boats and enjoyed the music - which pumped out of the massive sound systems that two or three of them had included to compliment their light displays. Now I know it's not very "Christmassy", but waiting there, and getting prepared to spend the next three hours rowing our butts off, tunes like "You Shook Me All Night Long" and "Come On Feel The Noise" helped me get psyched up for the row which was about to commence.

Some jockeying had to be done before everyone knew what they needed to do in relation to all the other vessels participating, and then at the sound of the siren the controlled chaos began.

We rowed for a short time behind the Sherriff's Harbor Patrol boat, but as soon as we got the chance we passed them, much to the surprise of everyone in the boat who didn't know we would be leading the parade. Only one or two of the 15+ people on board the Harbor Patrol boat knew we would be passing them. Most didn't think we had the ability to keep up, much less pass. A skilled gondolier can get the boat moving at a decent speed, but with four on a stripped-down gondola, much greater speeds are easily attainable. 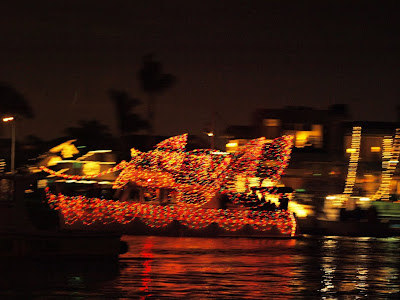 Of course getting the team together is one thing, working the bugs out so the boat moves straight in a forward direction is another.

Ralph Waldo Emerson wrote:
"No member of a crew is praised for the rugged individuality of his rowing."
And while that piece of wisdom somewhat applies, a Venetian crew is made up of rowers who do more than just row in unison; each also has own ways to contribute from his place in the boat. The guy rowing poppa (on the back) is usually considered the "captain", and while he is generally the one in charge, often times, the other rowers have a sense of when they should row harder or ease-up a little to insure that the boat follows the right line. I was the captain that night, but the whole crew worked dilligently to contribute to our proper trajectory.
Tim, Chris, and Phil deserve a lot of credit, not only for their hard work in rowing, but for doing it intelligently.
A Venetian crew is not like a dogsled - they guys row, and think.
A guy named Doug Floyd has a better quote for our style of rowing:
"You don't get harmony when everybody sings the same note.”
We spent some time tweaking our system until the group was more effective, and by the time we'd covered a kilometer everyone was on the same page.

This was an unusual set of challenges for a four-man gondola:
-we had to move as fast or faster than the column of boats behind us.
-we did have some good lights, but we were still a low-slung boat in the dark, running amongst dozens of big, cumbersome vessels, many of which were draped with an enormous amount of lights. Visibility was always a concern.
-we were navigating on a course which involved several turns and at least a dozen abrupt U-turns.
Our visibility issues were often easy to address just by staying well-ahead of the procession. A few times we had to resort to some fast rowing and bold maneuvers to solve a problem.

U-turns were no problem, downright fun actually. We raised our oars for a salute once while the boat was in a spin - the spectators on the bridge had no idea what we were doing and cheered once the "saluting turn" was complete.
We found the spectre of taking corner-turns more challenging as the gondola would try to keep spinning or drifting beyond the turn.

All in all it was an awesome experience, one which I count myself lucky to have been a part of.

Here are two video clips I shot from the back of the gondola:

I gave my camera to Tim's wife Dawn, and she did her best to shoot in the strange combination of movement and low lighting. She did a great job capturing the following sequence of images as we approached the dock and departed. 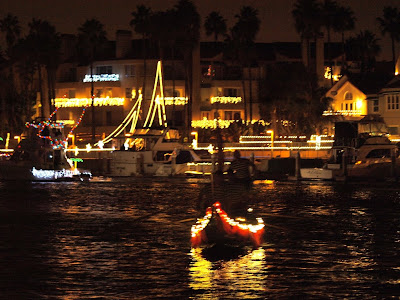 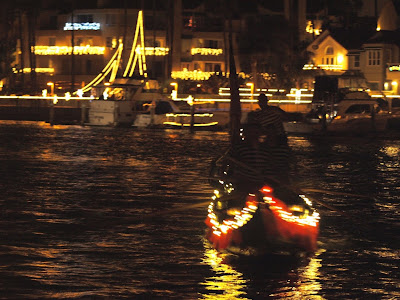 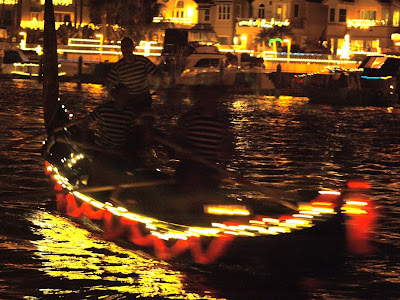 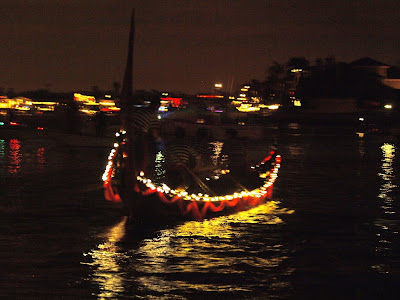 Later on, with the long lens, Dawn captured this image from across the bay. It may look familiar - I liked it so much that as I write this, it's the banner photo for the Gondola Blog. 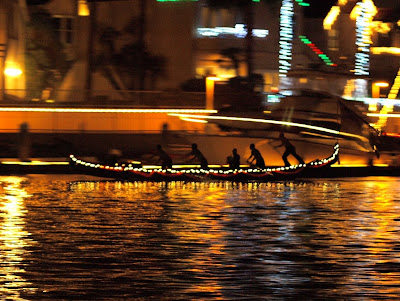