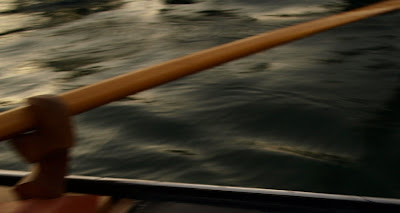 A week ago, on Sunday night I had the honor of rowing with four guys in Huntington Harbour. It was a practice-run for a four-man gondola, leading the official rehearsal for the Christmas Boat Parade.


Tim Reinard, owner of Sunset Gondola, managed to secure the lead position in this year's boat parade - a nice piece of lobbying on his part. While we rowed that night, I got the impression that our run was part practice...and part audition.

This was a great bunch to be stuck on a boat with.
Tim did an expert job rowing "poppa".
The position in front of him (known as "sestina") was manned by the ever capable John Synco.
Chris occupied the "lai" position, which is ahead of the main passenger seat.
I had the honor of rowing "prua", although Chris and I swapped a bit rowing both bow and "lai". Chris excelled in both spots.
The fifth guy was Phil Arroyo - a fairly new gondolier at Sunset, but a real "quick study".
Phil spent some time with my camera, did a great job trying out the "sestina" position, but there was another reason he climbed aboard that night. Phil was there to help simulate the presence of the french horn player who'll be riding during the parade on the 12th and 13th of this month. 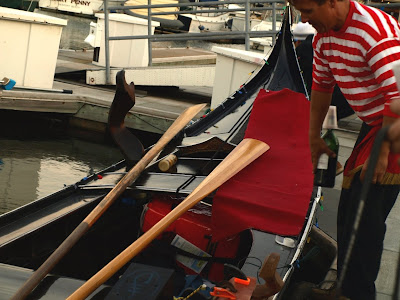 Tim steps aboard with "provisions".
Notice the clamp-on forcola in the lower right-hand corner. 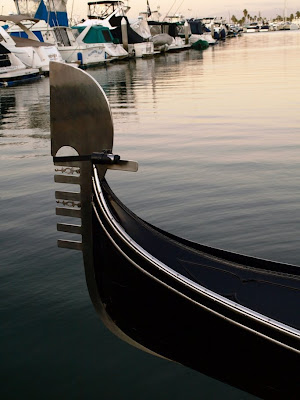 Of course the adventure wouldn't be complete without the oh-so stealthy strap-cam. 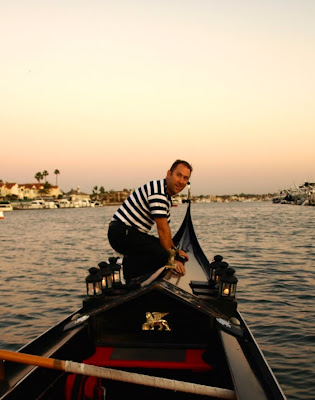 ...and me climbing out there to press the "on" button!
photo by Phil Arroyo 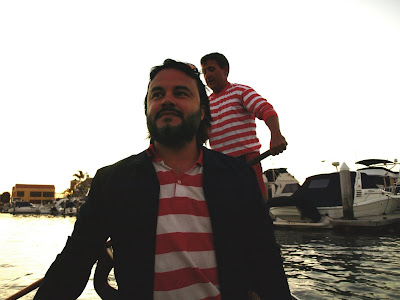 Tim and John at the beginning of the row.photo by Phil Arroyo 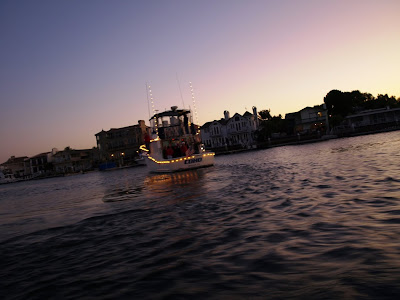 One of the local boats taking part in the practice procession.
photo by Phil Arroyo

After we met up with the committee boat and others participating in the rehearsal, there was a great waiting period where we sat around ready and waiting (and me eating a sandwich), and the other boats fussed about, trying to get their bline-up in order. 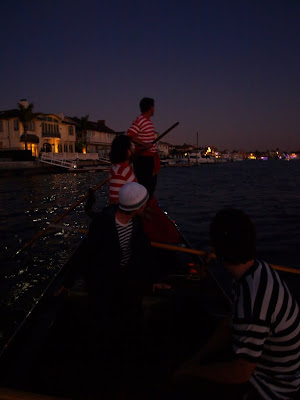 Watching and waiting (drinking wine and eating a sandwich).


Finally it was time to get the show on the road.

We discovered that, as Tim and I had suspected, we were able to move much faster than the other boats.
We rowed for about three hours following a predictable routine:
row ahead of the bunch,
wait at a turning point,
row again.

The Huntington Harbour parade follows a route which involves a lot of close quarter maneuvering.
While many boat parades travel only on main channels of their respective harbors, the one in Huntington includes a number of small inlets and such - a headache for a yacht captain, but a lot of fun for a boat full of energetic gondoliers.
We managed to perfect quick 180 turns in short order. 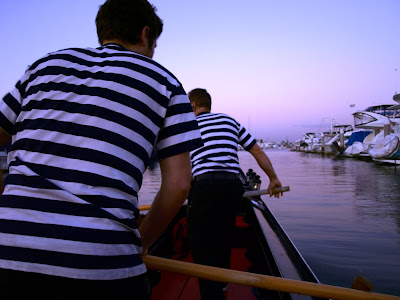 Chris and I showing our best sides.
photo by Phil Arroyo


Whether it was measured by fun, fitness, boat handling skills, or proving ourselves to the parade committee, the night was a great success. Most of all, it was a blast rowing together.

Anonymous said...
This comment has been removed by a blog administrator.
December 6, 2009 at 7:53 AM

Stupid buttercow, spamomatic junk-mail comment was removed by irritated blog host...because he loves his readers THAT MUCH!

Yeah, like we need another pyramid scheme in this economy. GADZ!