Adventures of the Lead Boat - A Very Successful Night 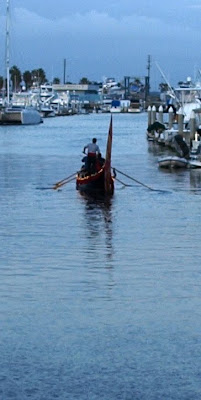 Tonight's row was amazing. We had a great crew of guys rowing, and beautiful weather for such an adventure.
I must admit that after hearing about last night's ordeal, I felt shortchanged rowing in such clear and perfect conditions.
My week leading up to this night had been geared toward being in top shape for the row, and I'm thankful for it, because as we approached the starting point, Tim offered me the position of poppa - an honor to row, and not for the novice rower.

It's a big responsibility to row poppa on a four-man gondola, especially in a field of over 60 boats in the dark. It was pretty much "controlled chaos" out there, and if not for the excellent management of the Grand Marshall and his staff, I'm certain there would have been some big-time crashes. Through it all Tim was a very patient boat owner.

Later on Tim summed it up best by saying "it's a bit like giving your friend the keys to your Ferrari and climbing in the passenger seat". Tim was a very gracious "Ferrari owner". He didn't do too much "backseat driving" and was exceptional rowing in the "prua" position up front.

Our evening went as expected: we kept in front of the parade and took advantage of our ability to shoot ahead whenever necessary. A gondola with four oarsmen can travel fast. Docks and bridges were typically crowded with spectators, who were just looking for reasons to cheer. We did our best to give them something to cheer about. On more than one occasion we raised our oars in the "Alzo i remi" salute, once while spinning the boat in front of a bridge.

Tim deserves a lot of credit here, not only for wrangling the lead spot in the parade, but for planning things so well that it was fun for all involved. All we had to do was show up and row. And row we did!

Adam Ho serenaded everyone with his french horn; his ride tonight was much less harrowing when compared to last night in the rain and punishing winds.

Rowing such an event is a lot of fun, but a lot of work as well. We weren't able to go at our own pace - we had a column of sixty-plus boats plowing towards us, with a Sherriff Department boat on point (and sometimes right on our tail). No, we were more than inspired to keep a certain pace. It was a great test of speed, endurance, boat handling and group-dynamics.

In the days to come I'll provide you with photos and video of our three hour row, but I'm done for now.

I've had my red wine, spent time in the jacuzzi, and it's time for bed. I suspect I'll sleep well tonight.

> We weren't able to go at our own pace - we had a column of sixty-plus boats plowing towards us, with a Sherriff Department boat on point (and sometimes right on our tail).

If the sheriff sends you a speeding ticket, use the entrapment defence or tell the cops the gondola was just "flowing with the wave of traffic".

Ferraris? Today I've gone to the F saloon to peek through the front glass as they've brought an F612 Scaglietti, which I haven't seen previously. Costs about 5 wedding gondolas, more if you need Venice compatbility.

Oh yes, the "Livio de Marchi package" would definitely add to the cost of a Ferrari.

Yes folks, I know I'm buttercowing at this point.

Hello !.
might , probably curious to know how one can manage to receive high yields .
There is no initial capital needed You may begin earning with as small sum of money as 20-100 dollars.

AimTrust is what you haven`t ever dreamt of such a chance to become rich
AimTrust incorporates an offshore structure with advanced asset management technologies in production and delivery of pipes for oil and gas.

Its head office is in Panama with affiliates around the world.
Do you want to become a happy investor?
That`s your choice That`s what you really need!

I`m happy and lucky, I began to get real money with the help of this company,
and I invite you to do the same. It`s all about how to select a correct partner who uses your funds in a right way - that`s AimTrust!.
I earn US$2,000 per day, and what I started with was a funny sum of 500 bucks!
It`s easy to get involved , just click this link http://wunomamy.arcadepages.com/iqijes.html
and lucky you`re! Let`s take our chance together to feel the smell of real money

That anonymous has a way with words. I am ready to invest!

GADZ!!!
And I thought I was buttercowing.
Gee whiz!