While rowing at the Battaglia Terme club in the Colli Euganei,
Chris Clarke came upon an interesting boat.
She was introduced as a "caorlina" by members of the club.
But as he spent more time on the water, and saw other caorline,
Chris noticed that this caorlina was a little bigger than the others he saw.  Yes, I know this is starting to sound like the narrative from the movie "Elf" with Will Ferrell. 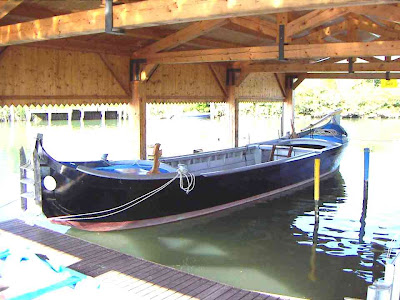 I found the boarding ladder on the bow intriguing.
My first thought was that she was something else,
turns out Chris thought the same:


The big boat had me mystified for a while - I thought she couldn't possibly be a Caorlina because of the size (11.5m x 2.5m).  I leafed through lots of books and proudly concluded that she must be a 'Batelon' but was later assured by club members that she is just a huge Caorlina.  Actually, if you Google 'Caorlina Giorgia' you will find several articles about her restoration in which the redoubtable Gilberto Penzo had a hand.
Some of you may feel the need to disagree with me, but it's true - I am the biggest fan of Gilberto Penzo.
Looking at the restoration page on his website, you can read about the revival of this big boat. 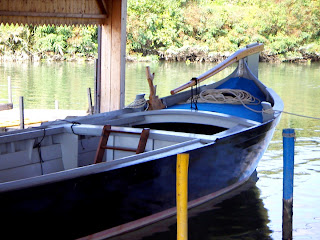 The boat reminds me a bit of the big peata out of Brenta, and I' guessing that rowers in small boats have a similar experience when she plows by. 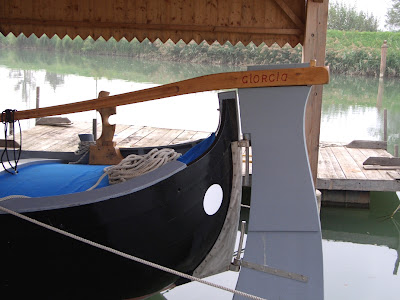 Racing caorline don't have tail rudders, but this one's got a rudder that could make a schooner captain jealous.
In the first image I saw of this boat, she was in the shadows of this photo, which Chris took of three mascarete at dock - begging to be rowed. 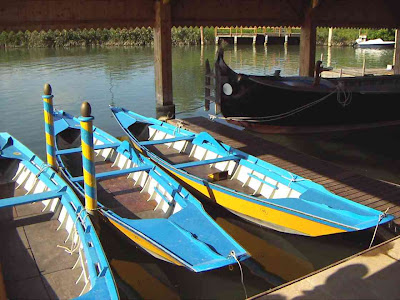 In our correspondences, Chris and I began calling this boat a "supercaorlina".
The term seems appropriate. 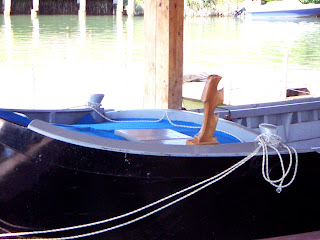 ﻿Whether or not the folks at the club there use the term "supercaorlilna", they certainly seem to have one.
Posted by Gondola Greg at 11:45 PM