Not long ago I got an e-mail and some photos from a gentleman from the UK named Chris Clarke.
One of the photos (the one below) really caught my eye.
It's one of those pictures you wish you were in. 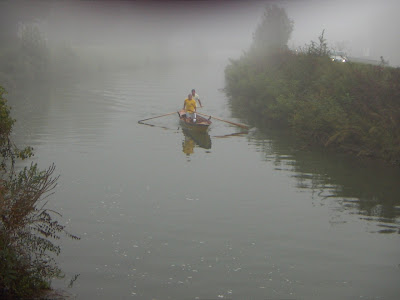 Chris is originally from Brighton, although his UK home is now Walton on Thames.  But he will be living in the San Diego area for the next nine months, manning a post with the same company that sent him to Italy.
Chris writes:
From 2004 to 2007 I was working in Italy
(near Rovigo, VE) and being a keen rower of traditional Thames Skiffs I thought I would give 'Voga alla Veneta' a try.
I was fortunate to find a small enthusiastic club of enthusiasts at Battaglia Terme in the Colli Euganei and despite my basically non-existant Italian was welcomed with open arms into the 'Circolo Remiero El Bisato'.
They ran a course for those wishing to start out and I was soon zooming around in a Mascareta.
I managed a few informal races and had some great days out pushing an oar in Caorlina - there were some memorable trips on the Lagoon and also down the river Brenta from Padova. 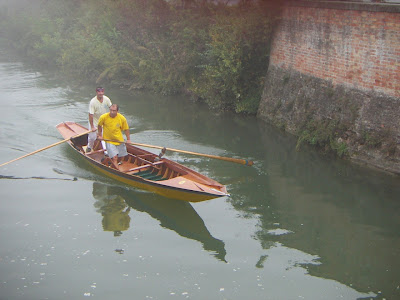 What you're looking at is not Chris Clarke rowing his first race. These photos were taken by Chris, of the first race he watched.
The misty race was my first live sighting of Voga alla Veneta.  I found the club on Google and wandered down to have a look.  At the boathouse I was met by a gentleman called Sergio - he didn't speak a word of English and at the time I spoke only about 2 of Italian.  We managed to communicate on some level with lots of smiling and hand waving and I understood that he wanted me to come back next week because there was some kind of race going on.  That is how I came to be standing on the bridge watching the boats emerge from the mist.
And emerge they did.
Like a vision, like something out of a movie.
These aren't photos of his first race, they are photos of the first time he saw this type of rowing, the start of something for Chris Clarke.

Three years later I returned to the UK with an Italian wife, a love of Venetian rowing and several stones heavier!

I love the term "several stones heavier".  It's an English weight term, but it has everything to do with having married an Italian and having lived in the Veneto.  If I were to spend three years living in Italy, I'd need to row as much as possible...to burn off all the great food I'd be eating.

Many thanks to Chris for sharing story and photos with us here.

No matter where you go, Chris - I have a feeling you'll always have a love for Voga alla Veneta.
Posted by Gondola Greg at 11:09 PM