Perched at the rail, in the window of Ristorante Da Ivo, my daughter Isabella was shooting photos.

Not long ago I would have told her to only shoot a few, but with an enormous digital memory card (and the strap around her neck to prevent electronic baptism), I told Bella she could take as many photos as she wanted.

She caught some nice images of a gondola passing by, which can be seen in a recent post "Da Ivo Window Sequence 1 - Gondola".
Next, she caught sight of a gentleman rowing by on his own small boat. 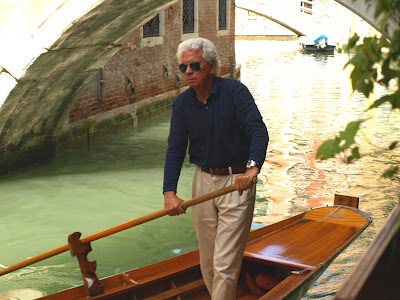 Quite likely this was his boat, a privately owned sandolo.
Sure, there are club boats out there like this.
And some are in such pristine condition,
but the guy didn't look like he'd just checked the boat out of a club.
He looked like he was out on his own boat, like he did this every afternoon.
The clothes also didn't look right for a rowing club outing.

As he passed by the window, he heard the tell-tale sound of a DSLR camera snapping away and looked up.  By the expression on his face in this shot,
he was probably annoyed - thinking it was just another tourist. 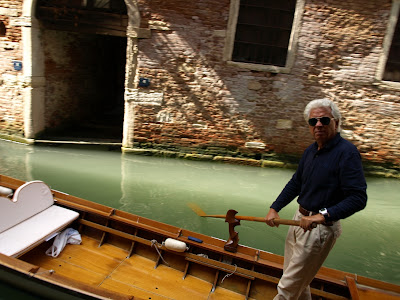 "Who the heck is taking my picture?"

Then he realized that the person holding the camera was a cute little
eight-year-old girl with big brown Italian eyes.
Smiles prevailed from then on.
My guess is that he's rowed the same route for some time because he managed to duck under the Ponte dei Fuseri without looking. 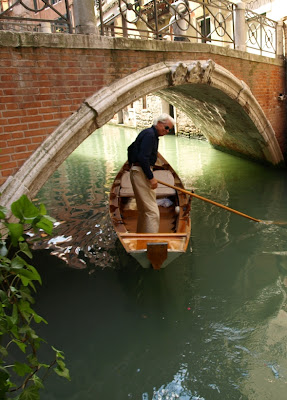 Next, he gave Isabella a big thumbs-up from under the bridge. 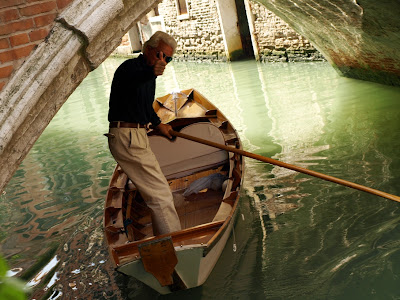 Notice the small mounting-piece for an outboard motor?
I'll bet he never uses it.

The sandolo was gorgeous; a real varnished beauty.
I'm guessing there are many reading this post, thinking about how they'd like to pick one up next time they're in the Veneto. 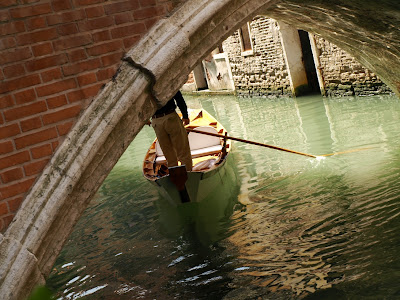 And just like that, he was gone - rowing off into the maze of canals,
which I'm sure he knows like the back of his hand.
Posted by Gondola Greg at 11:39 PM

Being well-dressed in public is important for most italian people, as far as I've seen. After all (north) Italy has famous fashion.

By the way, that gentleman has a weird wristwatch. Is that a micro mobile phone or some kind of a data logger for exercise?