Unveiling of the Curci Gondola 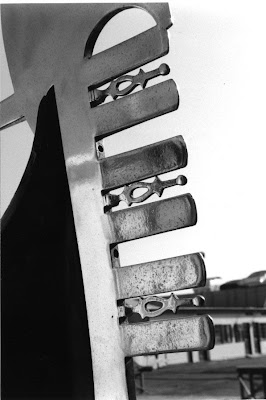 photo by Rick Rosen
I arrived at the shipyard this morning to figure out what needed to be done before launching the "Lucia".
This is a very significant boat in Newport Harbor. In my mind she's like a city's version of a national treasure. Imported from Venice to Newport in 1964, the boat known by many simply as the "Curci Gondola" has played important roles both in the Curci family and the history of the harbor.

Influential and philanthropic families take many forms, and Newport certainly has a few, but the Curci family is my favorite because they are Italian - in all of the very best ways. Italians are known for their love of family and the reverence they pay to their heritage. It's no wonder then that this family has had their own gondola for over 45 years.

As is often the case with Venice-built gondolas, eventually the "Lucia" needed some restoration. Maurice Walsh was tasked with the project of restoring this great boat to her full potential. In my mind, Maurice is an "old master"; not because he's old, but because he does things in the traditional way - taking time to get them right, and always keeping the best interest of the boat in mind. I was honored to head up the restoration of all metal on the boat. The "Lucia" was launched once again in 2001.
After the restoration was complete, the Curci family joined us for a Festa della Sensa ceremony in Newport Harbor aboard their private gondola. Later we talked about doing a limited number of passenger cruises with the boat - a dialogue that continued off-and-on for many years.
For a while the "Lucia" resumed her spot in front of the Curci home. Not long after, the boat was carefuly cradled and wrapped for safe keeping. The duration of her storage hadn't been decided, but based on the way she'd been tucked in, I knew she'd keep well until the day she was unwrapped again.
Today was that day.
The shipyard staff moved the gondola into position for the launch tomorrow. This afternoon I returned to the yard, and with some help, removed a cover and support frame that had been on the boat for almost a decade. 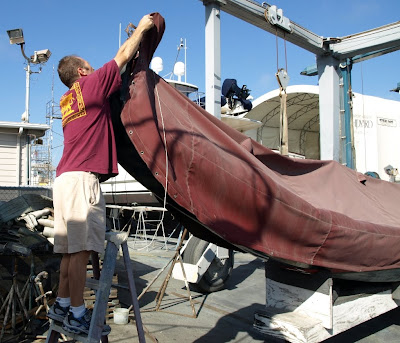 Removing the cover was an obvious step in the process of preparing the "Lucia" for launch, but up on that ladder in the afternoon sun, it felt ceremonial. 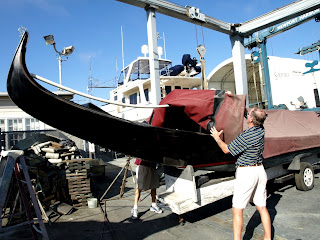 Folding and rolling the canvas forward. 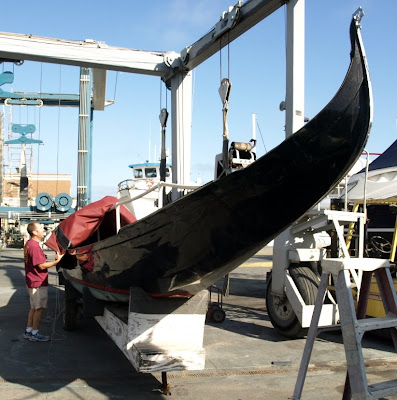 Maurice Walsh may be an excellent shipright, but his main craft is canvas. When he put together this cover, Maurice used a top-of-the-line material known as "Top Gun" - expensive but worth it. 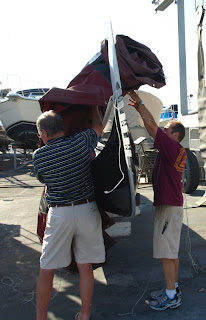 Removing the canvas after rolling it all the way to the bow. 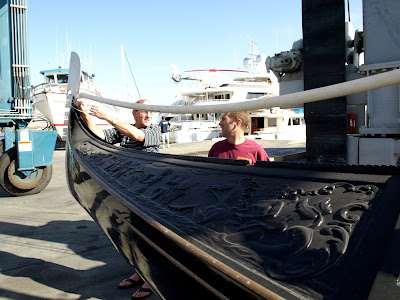 With potential longterm storage in mind, a frame of plastic pipe was erected to ensure proper rain-shed. Once we removed the canvas, the pipe frame had to be removed. 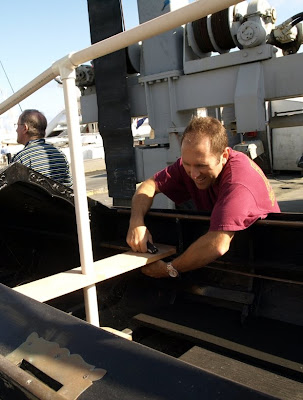 Temporary thwart-pieces were installed to reinforce the pipe frame. The system was ingenious and removal was easy. 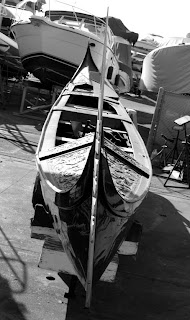 The Tramontin family built this gondola in 1960.
I have no idea whether or not they knew she would survive 50 years, but they built her well enough to make sure she could. 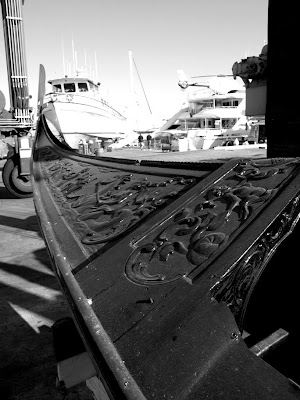 The carvings on her deck attest to the fact the tha "Lucia" is a wedding gondola.
The carvings on this gondola were done by a craftsman known as an intagiadòr. I've been told that the design on this boat is a classic offering from an intagiadòr known as "Il Santo" a legendary carver who, along with most of the men who built this proud vessel, is no longer with us.
An old friend once told me "know where you're going, but never forget where you came from". As the "Lucia" has played a significant role in the Curci family, it's clear to me that they've never lost sight of their heritage.
Tomorrow the "Lucia" will grace the waters of Newport once more, and that passenger service dialogue has come to a head.
Starting Friday the "Lucia" will take a select number of lucky couples on romantic cruises through the canals of Newport.
I am honored and humbled to play a part in her journey.
Posted by Gondola Greg at 6:50 PM

> Wednesday I arrived at the shipyard this morning to figure out what needed to be done before launching... Starting Friday the "Lucia" will take a select number of lucky couples on romantic cruises...

So this boat enters customer duty almost straight out of storage? That's kind of amazing, as people would tend to think of a major overhaul following 10 years in mothball!

Also how did the methuselah gondola fair against gravity? When I saw the installed grid structure in the photo, I first thought the mothballers tried to do something to counter long-term bow and stern drooping.

Finally do you have the original cavalli, forcola and hood lamp/statue for the Lucia? They are not seen in the photos, not even in the press release photo.

What a nice old gal. She even has all her teeth!