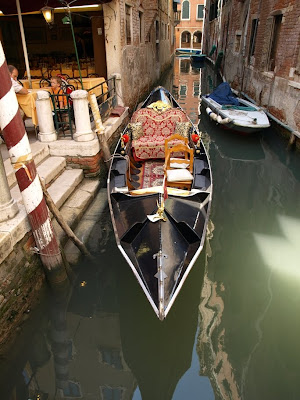 Spend some time in a traghetto or along a busy fondamenta - any place where gondoliers congregate to talk and joke in between cruises, and you'll hear about other gondoliers. Sometimes it's gossip, other times admiration. Most of the time they talk about gondoliers in their own traghetto, but there are exceptions.

One night I was grabbing a late dinner in Venezia's Campo Santo Stefano with a gondolier, and we were discussing all things gondola. I mentioned a certain sandolo and the guy who rowed it, I'd seen the guy operating out of another campo just down the way, and when I described the man and his boat, my friend said "Oh that's "The Terminator".

Wow, now there's a nickname.
An explanation followed about how this guy was always on duty.
He didn't eat, he didn't sleep.
His work ethic was unstoppable. 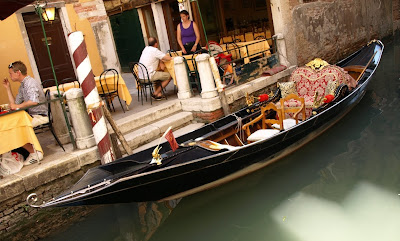 I watched for him whenever I was out.
He had great locations. I noticed him working a few different spots regularly. With a sandolo you can park your boat in places that are too small for a gondola. The maneuverability also allows for turnarounds in tighter spots.
One day I spotted "The Terminator" at a little canal-side eatery . By then I recognized his boat first and knew he was there. As I lingered to snap a few pictures, some locals walked by and chatted with him as old friends do. 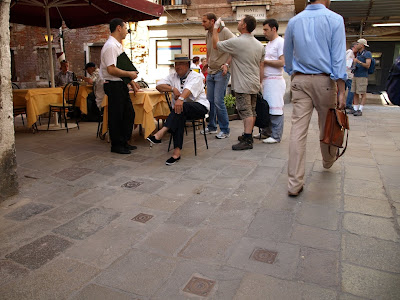 Looking through photos of previous visits, I realized that "The Terminator" was in many shots. I hadn't noticed the man, because I was always looking at the boat.

Gondolas abound in Venice, but the passenger sandolo is a bit of a rare sighting.
She has a beauty of her own; an understated elegance which comes from a more practical approach. 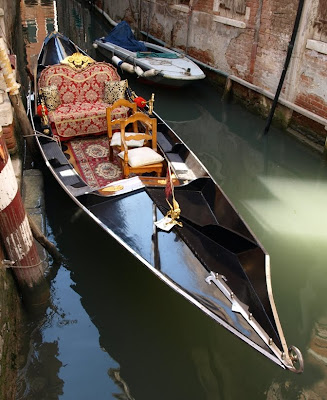 The sandolista is also unique, a lone wolf most of the time.
because they are often one-man-one-boat operators, without the support of a traghetto.
Most of these guys have a more independent spirit.
And while most of them have a solid work ethic,
Only one that I know of has earned the name:
"The Terminator".
Posted by Gondola Greg at 12:03 AM

I passed through that canal last Sunday during a trip in Venice on a sandolo with some friends of GSVVM and the Terminator was there ...
Nereo