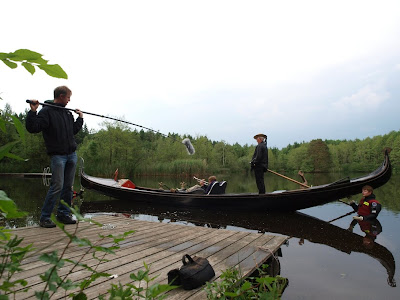 Ingo Stahl of Germany sent me these great photos of a film shoot he and his gondola were hired for recently.
The scenes were shot for a Bavarian daytime drama called "Franzi". 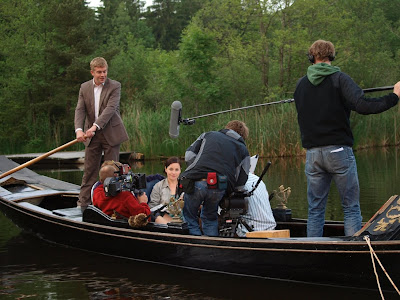 It's fun to watch as a film crew tries to cram their entire operation into the passenger area of a gondola.
Regarding the setting, Ingo writes:
"it seems to be Wörthsee, but it isnt - it's a small private pond in our region"
Many gondola operators I know have been involved in film shoots. From commercials to major motion pictures, getting contracted with your gondola is fun, challenging, and always makes for good stories later. 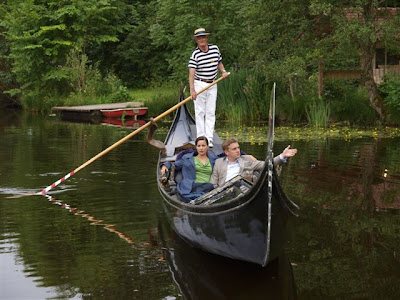 Here's what the TV viewers see - Ingo looks sharp in his white pants.
Since I don't get much opportunity to watch Bavarian soap operas, Ingo gave me a general outline:
"The story tells the daily lives in a middle countrytown, young love, with all the problems, when people are unable to look at and listen to one another. The main figures are Franzi and her ragazzo Werner, who is the son of a fashion shop owner, but would prefer to be a jazztrumpeter and owns a gondola most stories revolve around. I myself am not in the action. You see the best known tv-stars Jule Ronstedt and Sebastian Bezzel, and the Gondoliere Ingo Stahl with his gondola." 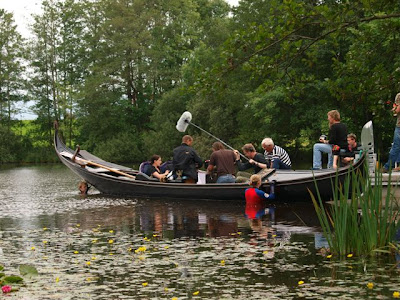 When TV producers are really serious, they throw a couple guys in wetsuits in the water too - just to make sure the boat is exactly where they want it.
Next time I see Ingo, I'm sure he'll have some great stories to share from this film shoot.
To read more about Ingo's gondola operation, check out his website.
Posted by Gondola Greg at 1:20 PM