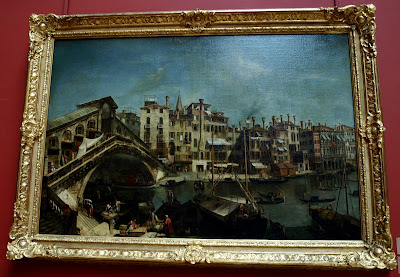 While touring the Hermitage Museum in St. Petersburg, Russia,
I saw lots of amazing paintings.
The first one I posted about here was an exquisite Canaletto called "Reception of the French Ambassador"
(which you can see in my post "A Piece of Venice in Russia).
Not far from that masterpiece of Antonio Canal, was this lesser-known,
but quite impressive painting by Michele Marieschi.

Marieschi wasn't as well known as Canaletto, but he did a great job of capturing interesting details of Venice in a landscape,
and his piece "Rialto Bridge in Venice" is a perfect example.

One thing I love about this painting is the angle that Marieschi chose.
There are a number of good angles to choose from when it comes to the Rialto, but looking at it from this perspective gives the bridge a dramatic appearance - it almost looks like it's physically heaving up over the water. 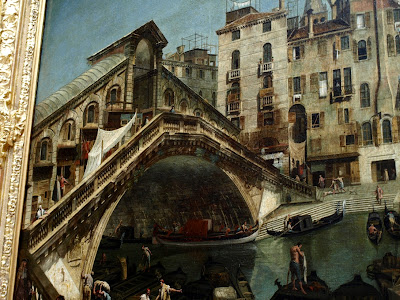 Ahh, but it's not just about the architecture.
If you're gonna paint a picture of Venice, you've gotta show her people, and their boats.

Looking at it from my background, I am of course interested in the boats (and we see a lot of them), but the people in this painting tell so many stories.

Working, fighting, and talking to or about each other - these appear to be common themes of the scene depicted here.

Let's begin at the base of the bridge: 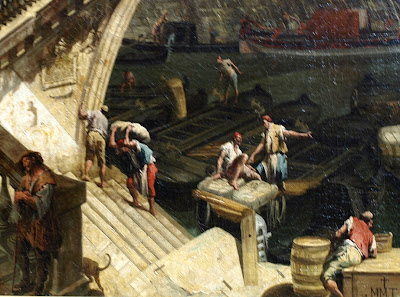 The artist was wise to include working people in this piece; as a major center of trade, Venezia was always buzzing with people moving stuff around.  Most of the moving was by boat, but they didn't have forklifts around back then, so workers carried loads on their backs, which is what we see with the guy in the red trousers.
Beyond the stairs we see a fleet of cargo-carrying boats,
complete with forcole for rowing.
Across the water we see boats moving people and goods around.
Of course not everyone is working.
One guy sits on cargo and listens to another guy talking, and gesturing to the right.
Looking to the right we see what the artist appears to have chosen as a sort of centerpiece; while he's not in the exact center of the painting,
and the whole scene doesn't revolve around him, the guy with his shirt off does seem to have the attention of a few people, both on the water and atop the bridge. 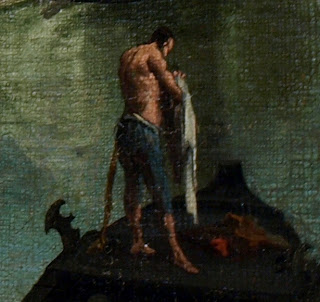 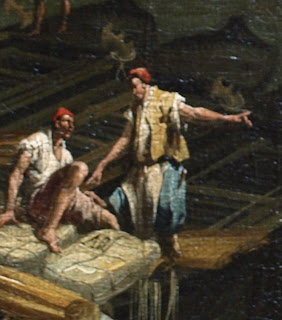 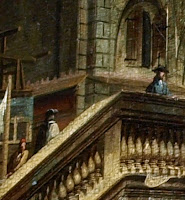 Was it scandalous to remove your shirt back then?
or was he late for work or something? I'm sure there's a story there.

Another thing Marieschi included was people telling other people what to do.
Just below the shirtless man we see a guy who appears to be a boss of some sort, giving direction to the two workers closest to him: 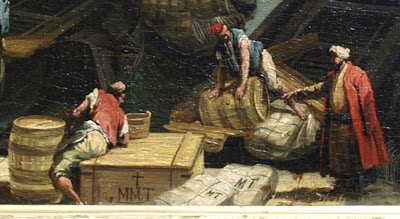 So let's see, there was the working, the talking, and, oh yes, the fighting.
Seems like there was a bit of that going on back then too.

In the lower right hand corner on top of a large vessel, there's something going on between two people.  It's really hard to tell what; I mean the one guy could be praying for the other with a "laying on of hands"...or he could just be smacking the guy.
But out on the Canalazzo we definitely see a fracas of some kind going on between two gondoliers. 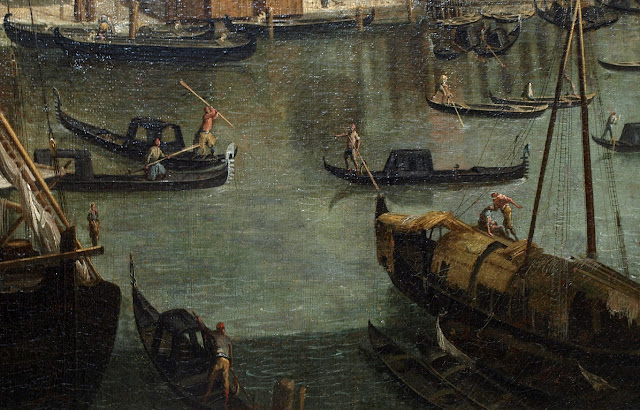 I'll be the first to acknowledge that my interpretations of art are not those of an expert, but having spent a lot of time on the water,
I'm pretty certain that these two guys weren't saying
"Hey, look at my new remo. Isn't it pretty?"
"Oh yes, a real beauty. Hey, look at mine".
No, this was a less-than-friendly exchange.
What I do wonder is what the third gondolier was saying.
Was it "Hey, watchit, that guy's gonna whack you!"
Or was he cheering one of them on?

Here's a closer look at the fracas: 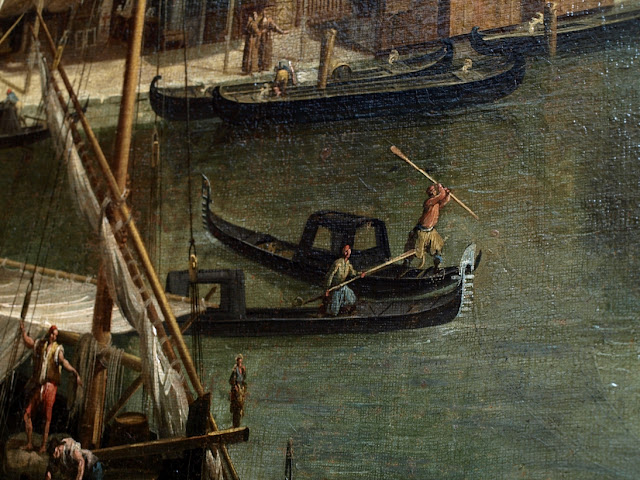 In the lower left corner of our "fracas close-up", we see another guy telling someone else what do do - no telling whether or not that will lead to some kind of fight, but we've got a full-fledged fistfight going on across the way: 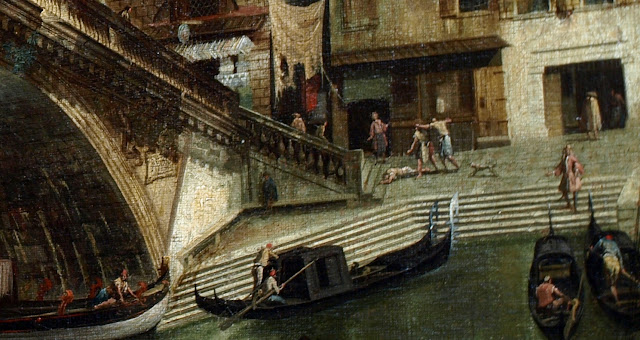 Wow!
Someone really felt the need to get their point across. 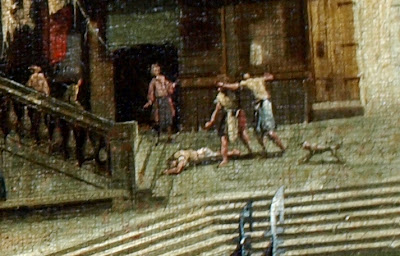 Now tell the truth,
how many of you thougth this was going to be a boring post?
No, nothing boring appears to have taken place when this was painted.
There at the base of the Rialto bridge we see:
one guy lying on the ground,
another guy receiving a similar smackdown,
from a third guy who's getting barked at by a dog,
while at least five other people watch
(either in excitement or fear).
What we see in Venice today is fantastic, and some of the themes have remained constant, but it looked a little different back then - maybe because there weren't thousands of tourists walking around, following tourguides carrying signs and umbrellas.
The boats have changed as well.
Working, talking, and order-giving still take place.
Fighting in Venice still goes on, but not as much as it appears to have back then.
In centuries past there were actual designated places for such disgreements to be "worked out" - places like the "Ponte dei Pugni".

There are many other things going on in this painting, all are interesting depictions of a Venice from long ago.  Some attention was also given to showing the different ways people dressed back then. I must also note that the artist did a great job of capturing the buildings and other elements of the city.
Both then and now, Venice is a remarkable place that can only be upstaged by her inhabitants.

"Rialto Bridge in Venice", by Michele Marieschi - I can't wait to look at more of his work.

Wonderful enter, I really enjoy when I was reading you magister art lesson.
Maybe a good idea to try to know what is telling the guy of the back of the gondola is to understand the body lenguage of their hans means still nowadays.

Greg, thank you for posting these wonderful details from the Canaletto paintings you saw in St. Petersburg! There is always so much to digest in these fantastic pictures. Thanks again! --Laura Morelli, Ph.D. www.lauramorelli.com