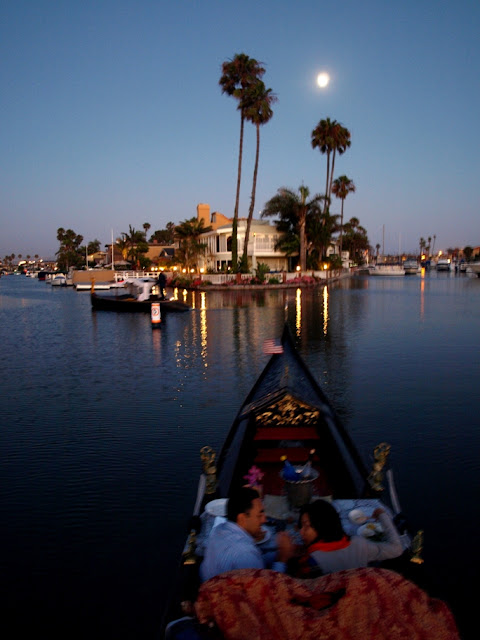 Several years ago, I had the occasion to employ a gondolier from Venice, Italy in my Newport Beach operation.
For the purpose of our discussion, I'll call him "Mario".
His best friend had married an American tourist girl from this area and had relocated to Orange County, California - taking a job and starting a family.
The two friends had both served as gondoliers back in Venice,
and after visiting his friend, Mario decided that he needed to make Southern California his home as well.
I'm quite certain that it had nothing to do with rowing a gondola in California, and everything to do with a chance encounter he had with a rather curvacious cashier at a grocery store in Fountain Valley.
Nevertheless, Mario ended up applying for a job with my servizio.
I must admit that the interview process was a little weird.
Here was a guy who'd grown up rowing in Venice, and who had rowed as a gondolier for a major traghetto, and I was there to make sure he knew what he was doing rowing a gondola.
Truth be told, I spent most of the interview watching his technique so I could try to replicate it during my next cruise.

I felt like I was interviewing Eddie Van Halen for my garage band.
Big surprise: he got the job.
So many things happened during the year and a half that he rowed for me,
but this is the "Marco Polo" post.
We learned a lot about Venetian gondoliers from Mario.
And while it may be unfair to draw the conclusion that
"All Venetian gondoliers like to make stuff up" - Mario sure did.
In fact the joke among our staff to this day is:
If you take a gondola ride in Venice,
it doesn't matter where you start,
where you finish,
or what part of the city you go through...
somewhere along the way - you're gonna see Marco Polo's house!
Is it an unfair characterization of all gondoliers?
probably so, but that's what happens when you have Mario rowing cruises for you.
You see, six months into his tenure with us,
Mario was pointing out the house in the photo above as "Tom Cruise's house!"
Marco Polo never lived in Newport Beach, so Mario had swapped him out for the next best thing.
Tom Cruise probably owns a lot of nice homes,
and a place on the corner of an island facing the setting sun,
in a city like Newport Beach would be a great choice.
But I can tell you with great certainty that
Tom Cruise did not own that house, ever.
In fact the guy who lived there at the time was about six feet tall,
blonde, and looked more like Ed Begley Jr.
He wasn't Ed Begley Jr. either, but he most certainly was not Tom Cruise.
As time went on I found out that Mario was also pointing out the homes of "Cher" and "Madonna"...but not always using the same houses.
The funny thing about it was that passengers knew most of the time that he was just making it up, and it turned out that they loved it - found it charming
in a strange sort of way.
Eventually things didn't work out with the voluptuous grocery store cashier,
and like Texans pine for their Lone Star State,
Marco began to miss La Serenissima.
After calling Southern California his home for about a year and a half,
Mario returned to Venice, where I understand he is quite happy.
In fact as I write this, he's probably pointing out "Marco Polo's House"
to someone right now.
Posted by Gondola Greg at 1:14 AM