New Orleans gondolier Robert Dula has a problem that some of you might identify with:
I have to deal with submerged stumps in certain areas of the park.
They wreak havoc on my wooden oar.

After dealing with these underwater hazards, and the damage they cause, Roberto talked to a friend who knows a thing or two about fabrication using other materials.

Construction of an aluminum remo began. 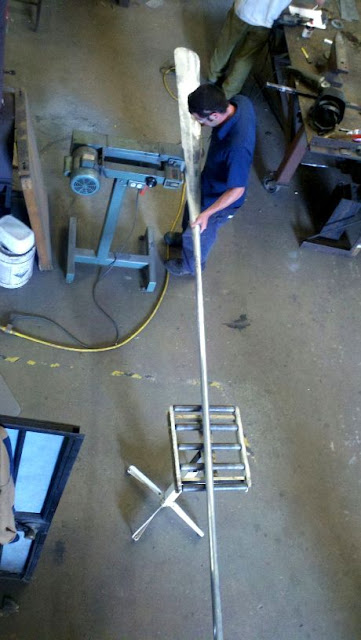 I received the above photo with the words:
"Top Secret! For your eyes only!"
I felt like a secret agent.
It was great.
Roberto told me to hang on to the photo, and he'd keep me updated on progress and tell me when I could share the information.

Then, on Sunday, I received this photo: 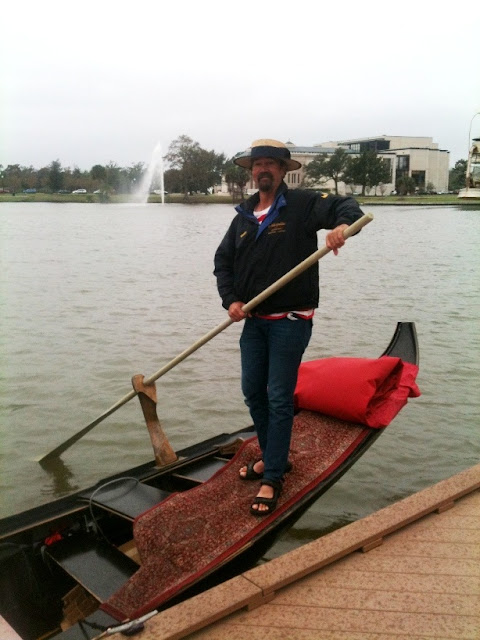 This photo was shot during the first row with the new aluminum remo.
Roberto said that it rowed excellently, and felt just like a wodden one.

I pressed him with some questions about whether it behaved like a wooden oar in flexing, and expressed some concern that in a severe situation - a metal oar could bend.

The weight is close to a wooden oar, but a bit lighter. It has a slight flex to it, but will not bend. I gave it all I had and it can take it.
I asked him if he thought it could get colder in the gondolier's hand in winter because it's metal.
I plan on wrapping my hand area with something like handlebar tape. That should give me a good grip and help insulate, as well.
John Kerschbaum in Minnesota has done the same thing with his wooden remi as teperatures drop at the end of the season.
Cold remo means cold hands.
If handlebar tape works in Minnesota, I'm sure it will do the trick in Louisiana - even with metal.
My next obvious question was "how much?"
Price wise, we're looking at around $500. I know that's steep, but it should outlast a wooden oar.
Without a doubt, some folks will have a negative opinion of this new remo,
and I'm certain that others are already thinking of buying one.
If the aluminum remo truly does perform like a wooden one, and if it will outlast it's wooden counterparts, I can see a possible success story for it.
Only time will tell.
Roberto finished with:
After I row with it for a while, I'll send an update and let you know how it's holding up.
I'm so curious, I'm tempted to jump on a plane and fly out to New Orleans just to try it out!
Posted by Gondola Greg at 1:15 AM

If I understand correctly, wooden remo handles are not perfectly straight, they have a slight curve in the them, with a large radius. Is that feature replicated in the AL6061 remo?

BTW, what about those tree stumps holing the boat as well. Does the remo sweep much deeper than the flat bottom of a loaded gondola?

The blade of the remo was made identical to a wooden one. The shaft has a taper to it, but not a curve. It feels remarkable, slicing through the water.
Some of the canals are tight and that's where I encounter stumps. They do not affect the gondola itself; just the oar.

I'm concerned/curious about the metal to wood interaction at the morso?

Wow.
I can't believe nobody asked that until now.
Hey Roberto - does the "alumi-remo" float?

"The weight is close to a wooden oar, but a bit lighter."

Therefore, I think it should float, at least partially, if the dimensions are close enough to a wooden remo and the welding has no holes or cracks.

However, I would worry more about theft. AL and copper tends to disappear nowadays, since the price of coloured metals scrap is so high.

(The remo does not need to be dug up to mobilize, unlike electric and telecom cables, so its tempting...)