As many of you know, a while back I was in Hollywood, attending a celebration fo the Feast of San Gennaro, when I decided to make some "minor modifications" to a wrought iron fence.  The corner was sticking out and giving folks some problems.  You know me, I like to be helpful, so I did what I thought needed to be done.

The fence "needed fixin'"...so I "fixed it".
Well it turns out that the old saying "no good deed goes unpunished" is true.
The other day my office received this letter: 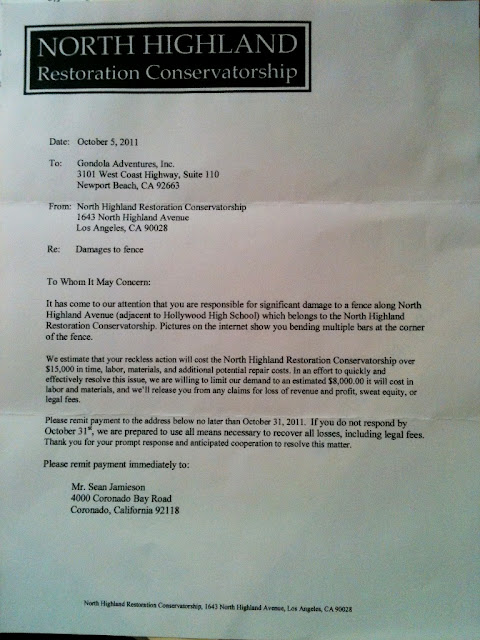 Unbelievable.
Whoever this "Mr. Sean Jamieson" is,
he clearly doesn't understand the need for a good "fence fixin'".
Ask anyone of the bystanders who were there that day,
and they'll tell you, that fence was problematic to say the least. 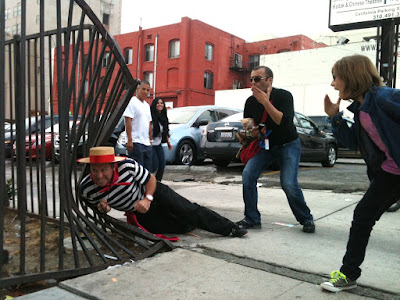 Even that guy with the two chihuahuas will tell you. Heck the chihuahuas would tell you if they spoke english.  Why do you think he was carrying them?
The fence was a problem.
Gondoliers solve problems.
I solved the problem.
Now where the heck am I gonna come up with eight thousand dollars to give to this Jamieson guy?
Hey, I know, there's a gondolino down in the San Diego area that I could "liberate" and sell.  That ought to get me at least enough money to cover this so-called "significant damage".
Hmff!
Posted by Gondola Greg at 12:07 AM

Amazing! We are not anywhere near the 1st of April, so maybe this legal letter is genuine? Media often reports on frivolous lawsuits from the USA.

Furthermore, you can also enter Google Street View for this location, which makes the iron fence damage clearly visible in pre-existing photos. Will send you some.

Maybe that trust fund didn't consider the advance of technology which we had in the past decade. Nowadays every netizen can have his or her private spy satellite thanks to Google...

(... but notably except for the area of Venezia, Italy, where there is no Street View [Calle/Canal View?] yet, so please don't bend wrought iron there, for we can't help you out!)

Guess, Greg could make that trust face their lies and force them to pay for his application in Guiness Book of World Records for the unaided open air iron fence bending category.

Just pay it with the Monopoly money. ;-)
Nereo