by John Synco (a.k.a Cinque)

American gondoliers infatuated with the profession seem to have an endless list of job-related topics to discuss. I've discussed topics ranging from wind direction and docking to blindly telling time and bathroom breaks. The focus here though is about a time prior to my 2005 Vogalonga experience when I found myself comparing hand calluses with some of my fellow gondoliers.


The group found it interesting that we shared the same two fleshy nodules along the inside ridge of our thumbs, which were caused from gripping the oar. After we discovered this fact we began comparing sizes like real manly men. The gondolier that rowed the most seemed to exhibit the larger pair of calluses.

After the initial conversation the topic would only come up occasionally. Sometimes a new gondolier would remind us, but the main catalyst was vino. I can only imagine the thoughts of a passerby witnessing grown men, filled to the brim with red wine, shouting and pointing at their thumbs.

The topic was fueled with an additional story when I was fortunate enough to visit Venice for the 2005 Vogalonga. I observed a foreigner confidently stroll up to a resting gondolier and reveal that they too were a gondolier. The large Venetian appeared to be amused and the first thing he asked was, "Where is your passaporti?" and he pointed at one of his giant thumbs.
My eyes widened and I immediately stared down at my own thumbs.  "Passaporti," I said to myself. I knew what he was talking about. That moment reassured me that I was doing something right.

If a Venetian gondolier had the same calloused hand then obviously I was gripping the oar correctly at least. 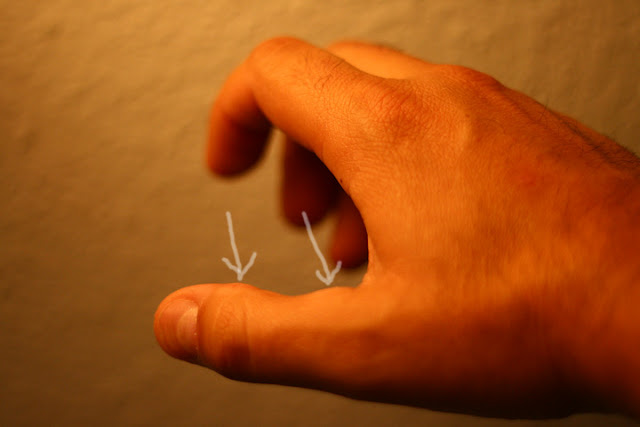 Over time my calluses beefed up and were immediately referred to as passaporti instead of fleshy nodules. They became a sort of badge for the job I love, but now that I have moved away these badges have come to mean something else.

I notice them everyday. Sometimes I catch myself picking at them. I haven't rowed in months and I'm beginning to feel them slowly fade. They are now a reminder... no, a timer. They are a timer ticking away and inspiring me to get something started up here.

A single thought has been racing through my mind each time I see them.
I need to cruise the waters on the back of a gondola again before my passaporti expire.
Posted by Gondola Greg at 1:21 AM

Great read, John. Once a gondolier, always a gondolier. It's in the blood. Hope all is well for you in your new home, my brother.