photos and video by Tamás Fehér 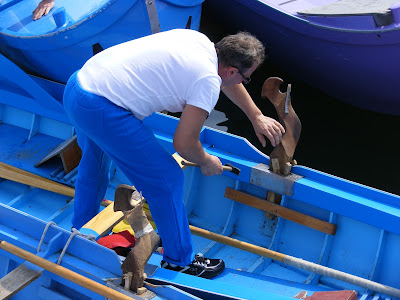 In the world of Venetian rowing,  attention is given to every detail.
Like so many systems, the "chain", which includes remo, forcola, footing, and of course the human body - is only as strong as it's weakest link.
If your forcola isn't seated well, it will move on you.
A simple wiggle can rob your perfect stroke of precious power.
So before any regata, great care is given to make sure the wedges are hammered in tight, and that the forcola sits at the angle the rower wants. 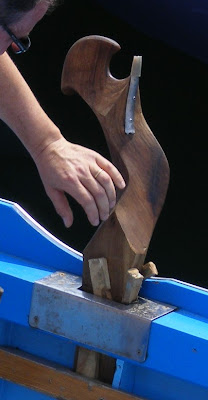 Looking at the forcola here, you'll notice that it has an extra piece of hardware mounted just below the "morso" (that C-shaped area where most of the rowing takes place.
In passenger service rowing,
and mildly aggressive recreational rowing, a forcola in "stock" condition will do just fine, and in fact the rower will benefit by being able to pull the remo out of the morso easily.

When vogatori want to push harder, they get moving through the water faster, and the remo has a greater tendency to pop out of the morso during the return stroke.
Establishishing a good rhythm is essential.
Keeping that rhythm going is of utmost importance.
Races have been won or lost because someone's remo caught an edge or bounced out of the morso.
Imagine the comparison to a footrace - if one of the runners stumbles,
just misses a few steps, it can doom their prospects of winning. 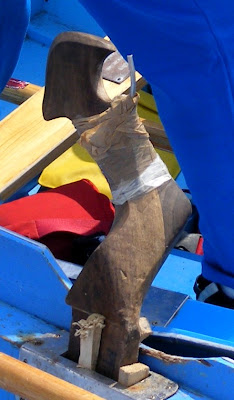 So what is that extra piece?        To keep the remo from popping out, a small piece of metal is placed at the bottom of the morso, to enhance the "naselo de soto" - that tip of wood that protrudes up at the bottom of the morso.         In some cases the metal piece is mounted to the forcola with screws (like the one pictured above).  Others are fastened with wrapping.  On the forcola to the right, it looks like some kind of packing tape was used to secure the piece, although there may also be screws hidden beneath the wrap. In some cases the forcola is tipped forward enough to eliminate the need for the extra piece.  Also, beginners and vogatori in races that are more based on fun may not see the use of a naselo-extension.  I have no doubt that racers in more competetive realms view this detail as a make-or-break advantage - each rower believing that the length and angle of their extension can mean the difference,

and give them the edge they need to win.
Having just the right remo is obviously also seen as of great importance,
but we should reserve that for another post.
As I mentioned earlier, making sure the forcola is secure with no wiggle-room is vital, but it requires some expert hammering.
Removing a well-seated forcola can be a challenge.
Venetians have a great little technique for loosening the forcola,
which is as fun as it is effective.
Here's a short video clip of the method:
In this post, we've examined some of the ways that rowers
"push the envelope", or "take it to eleven".
As always, I'm open to input and welcome comments from my readers.
Posted by Gondola Greg at 1:04 AM