Some Christmas Photos from Previous Posts

Over the years we've seen some terrific images around Christmas time.
On the eve of the holiday, here are a few of my favorites: 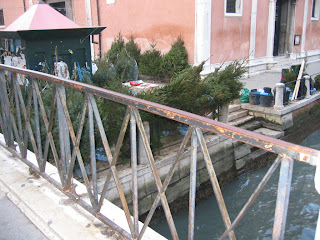 Sean Antonioli sent this photo of a Christmas tree lot in Venice.
It's not something most folks would think in such a place, but Venetians need to buy trees too.
The photo originally appeared in the post "Christmas Tree Lot - In Venice" from 2008. 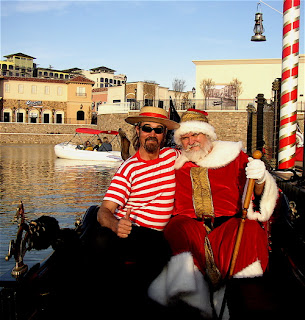 Two years ago this one appeared in my inbox.
Robert Dula sent it in when he was operating his gondola in Huntsville, Alabama.
The guy on the left is Robert, the guy on the right, well, you know who he is. 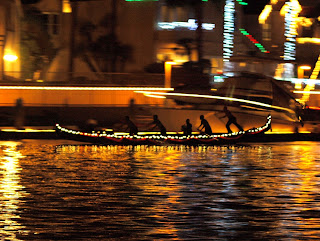 Dawn Reinard of Sunset Gondola shot this photo of a few of us rowing in last year's Christmas Boat Parade in Huntington Harbour.  We had a blast, leading the parade the whole time.  Tim did a great job lighting up the boat, and it came in handy on more than one occasion - anyone who's ever rowed a gondola at night knows that a black boat in the dark is stealthy...sometimes too stealthy.
A series of posts which include the words "Adventures of the Lead Boat" posted up here during the second week of December last year.
The above photo comes from: "Adventures of the Lead Boat - the Row". 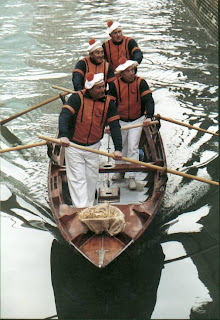 The GSVVM rowing club in Mestre tends to do some fun things for Christmas. This image comes from a procession where club members transport a symbolic Baby Jesus to a manger scene by boat.
Take a close look and you'll see the baby on the bow.
Here's a link to the original post:
"Christmas in Venezia - procession in Mestre 1".
photo by Nereo Zane 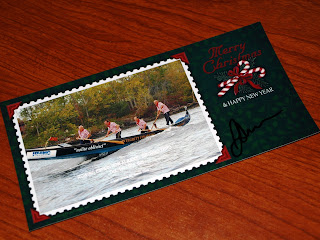 Not long after our expedition down the Hudson River in New York, I opened my mailbox to find a Christmas card from John Kerschbaum. To my surprise, it featured one of Nereo Zane's photos from one of the more wild days of rowing. 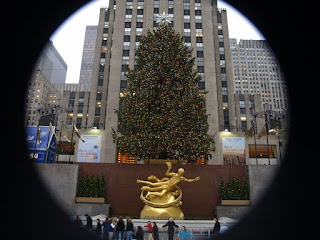 Two years ago when I was in NYC with my family, we took the kids to skate at Rockefeller Center.  I have always loved the tree displays they do there.  Here's one I shot on December of 2008.