photos by Sarah Longson
We've been getting a lot of rain on the coast of California. As the weather patterns usually behave, clouds come in from the Pacific, dump on us, and continue moving inland. Most of the rains we experienced here in Southern California, moved on to continue their deluge on the desert.
The manager of my gondola operation on Lake Las Vegas called me the other day to tell me that she'd just returned from a cruise with "about 600 pounds of crap wrapped around the boat". She may have been exaggerating, but based on the photos she sent later that day, not by much. 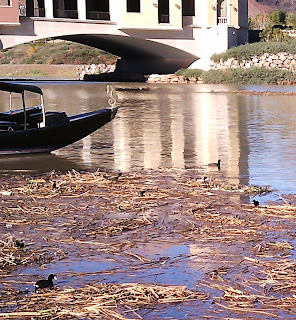 The way the geography is set up in the Las Vegas area, much of the runoff water drains toward Lake Mead, stopping first in Lake Las Vegas.  Everything that washes down with that rainwater makes it's way to our lake as well. 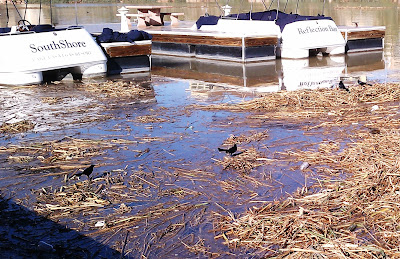 You know you've got a debris problem when birds are walking around on it.
Eventually, most of the junk that washed into the lake will sink to the bottom and decompose, but some of the items found floating around (buckets, old shoes, coolers) will need to be removed. 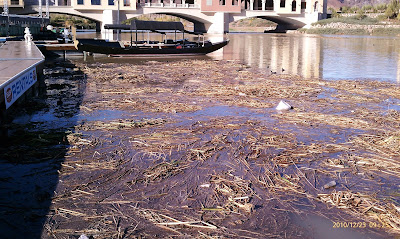 Floating debris, mostly plant material, fills the foreground with gondolas and bridge behind.
This isn't any kind of disaster. The debris on the lake is merely an annoyance, a brief interruption of otherwise great conditions. But it makes for some interesting photos.
Several years ago we had a dramatic delluge here in Newport following a long dry period.  The amount of debris left floating in one part of the harbor had onlookers speculating as to whether or not someone could make it across in snowshoes!
Unfortunately, nobody had a pair of snowshoes handy, so we never found out if it could be done.
Posted by Gondola Greg at 8:34 PM