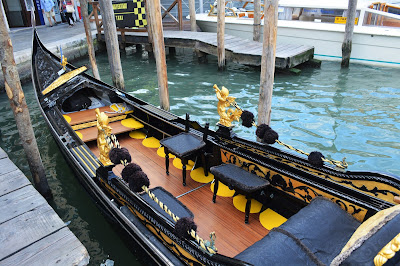 On an overcast morning in Venice, on my way between buying striped shirts and picking up hats, I came upon this gorgeous gondola.

Tied up next to the Rialto Bridge alongside a perfect water taxi,
there she was - with just about every extra detail a gondolier might want
on his boat. 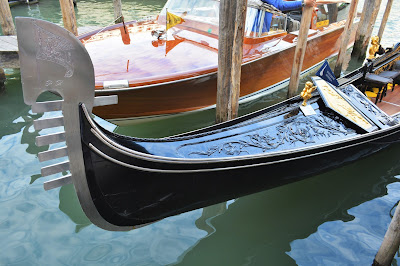 The stainless steel ferro had a classic engraving
of the flag of the Venetian Republic. 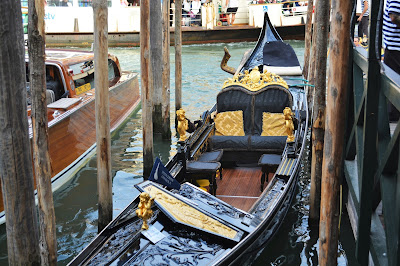 The seating was done in black with pillows
that matched the portela and scimier. 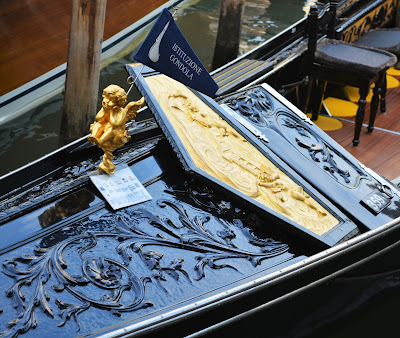 Fully carved decks indicated that she was a "wedding gondola". 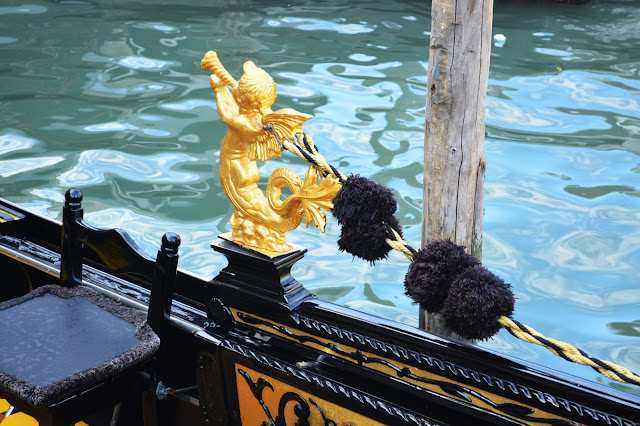 The cavalli were trumpeting angels - done in gold,
the pom-pom ropes had gold to match,
and I noticed that the pusioli (those arm-pieces that the cavalli sit on)
had extra high pedestals for the angels to rest on. 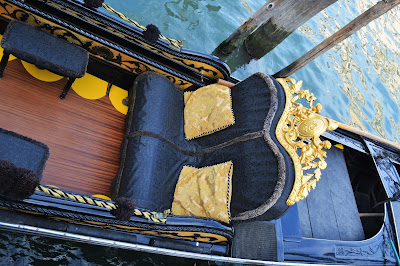 While the whole gondola was done on a black and gold theme,
the main field of the floor had been finished with a wood-grain look.
With yellow scallops, this was both unique and classy.
It also seemed to warm up the feel of the interior.

The scimier was striking in gold. 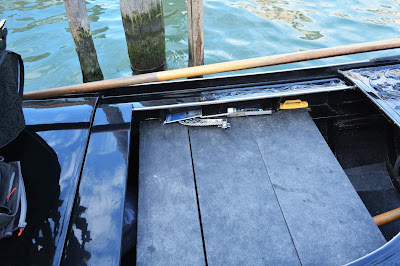 One rather interesting thing the gondolier had done involved the standing area behind the seat.  This area normally has two somewhat narrow trastolini boards, which are mounted a step down from the rail.
Ahead of them is a larger piece, that rests on the rails, and is painted shiny black like the decks.

In the case of this gondola, the owner had cut that large piece significantly, and added a third trastolini board - thus giving him more space to step and stand.  Like a number of other gondolas, his trastolini were finished in a non-skid material.

If you enlarge the above photo, and look closely at the rail
above the trastolini, you can see where the larger board
would normally end...where the carvings begin. 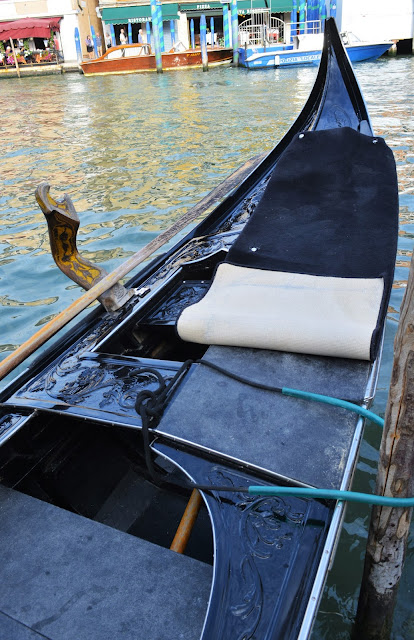 Many gondolas in Venice have carved decks.
On the more elaborate ones, the carvings can also be seen along the rails, which was the case here.
The gondolier also had a rich black carpet for the poppa deck.
Like a lot of gondolas with carpets,
he had flipped it up to allow for the tie-up. 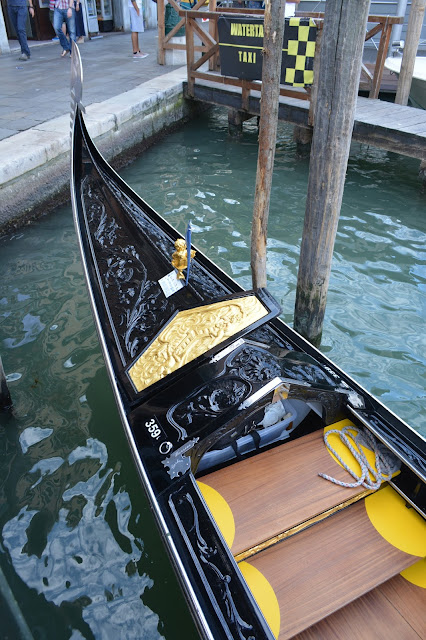 Here's a nice view of the front of the boat.
There were so many details to admire on this gondola. 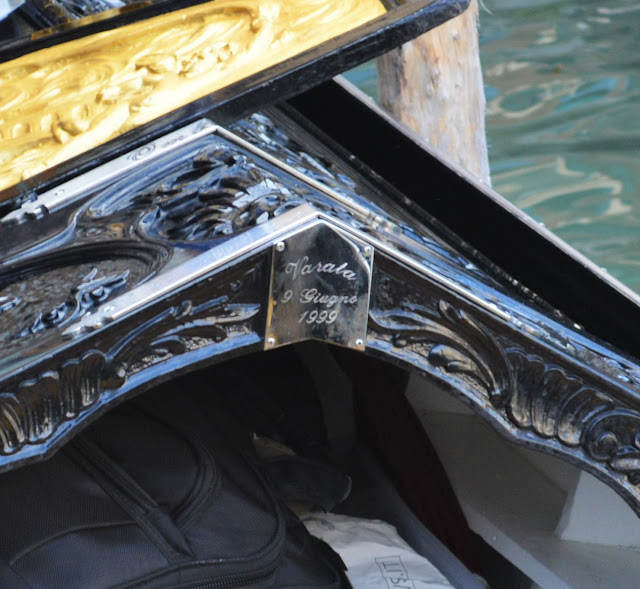 The gondolier told me that she was a Tramontin.
We can see from the engraving on this plate,
that she was launched on the 9th of June, 1999. 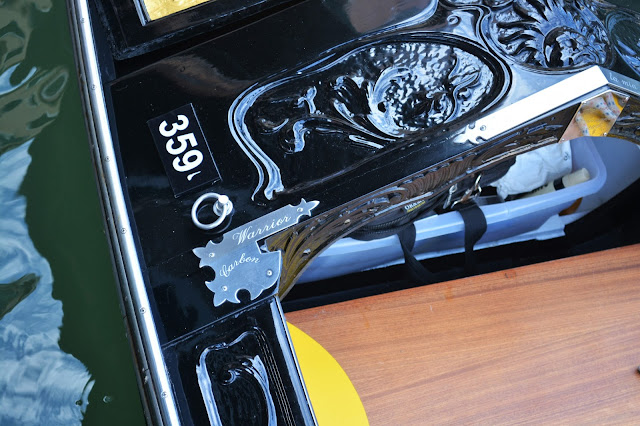 I'm not sure of the meanings of "Warrior" and "Carbon" on this side-slot plate for the portela, but the quality, detail work, and overall finish was crisp and impressive. 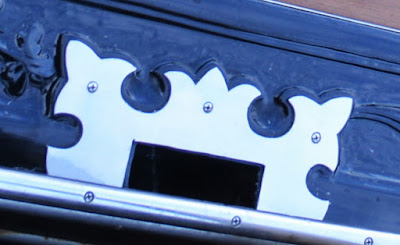 Even the plate for the forward buso caught my eye - not only because of the quality of the metal, but also the way that the carving had been done to frame it so nicely. 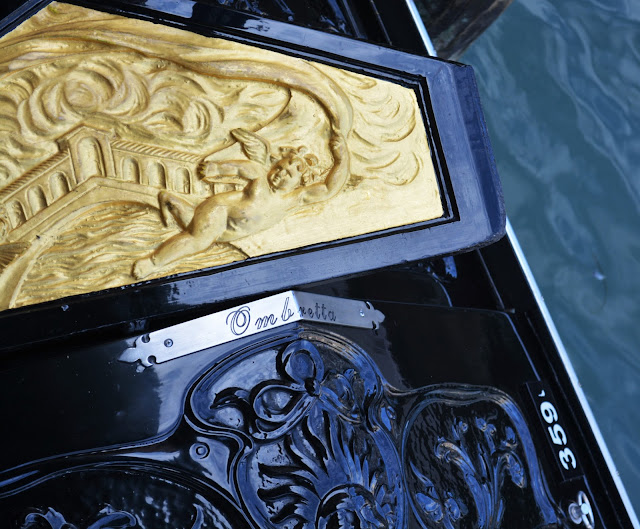 The Gondoliers in Venezia often display the portelas of their boats so they can be seen from the fondamenta - just like this guy had.
The light really made the gold pop - especially on a black background.
The shining sun carved in the forward trasto is something I haven't seen before in that spot, and it's a great design there.

As for the engraved word "Ombretta",
Nereo Zane tells me that it's a term gondoliers use for having a single glass of red wine.
He further told me that it also might be the name of the gondolier's wife, as it is a female name.

The lucky gondolier who owns this boat was there and I spoke with him for a couple minutes.
His name was Antonio.
He told me that the name of the gondola was "Love".
My guess is that he was translating for me, and that he actually calls her "Amore".
That would be a fitting name.

She is a truly gorgeous boat, worthy of her station in the shadow of the Rialto Bridge.