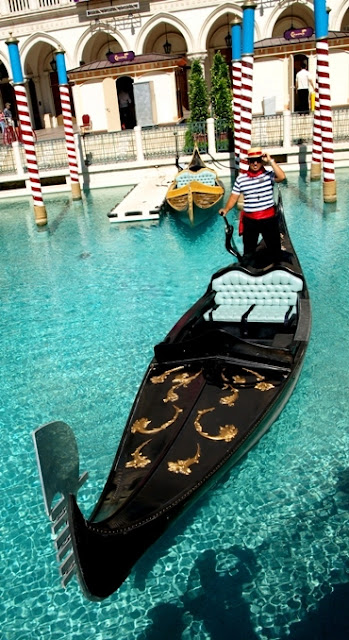 During a recent visit to Las Vegas, I inspected my gondolas out on Lake Las Vegas and spent some time meeting with gondoliers and staff there, then I drove to another location in southern Nevada and snapped a few pictures of some fairly high-profile gondolas.
Perhaps you've heard of them. 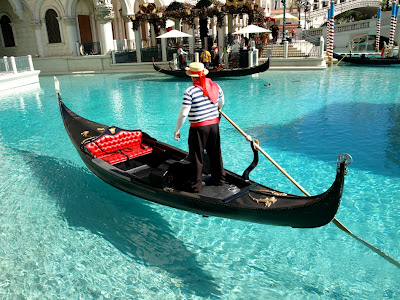 This is not the first time we've seen these boats here on the Gondola Blog.
These two previous posts include video clips:
"Video Sniping in Las Vegas"
"Casino Gondoliers Sing"

Most of the photos I've posted have been of the gondolas inside the casino, but during this visit, I chose to aim my lens at the ones out front. 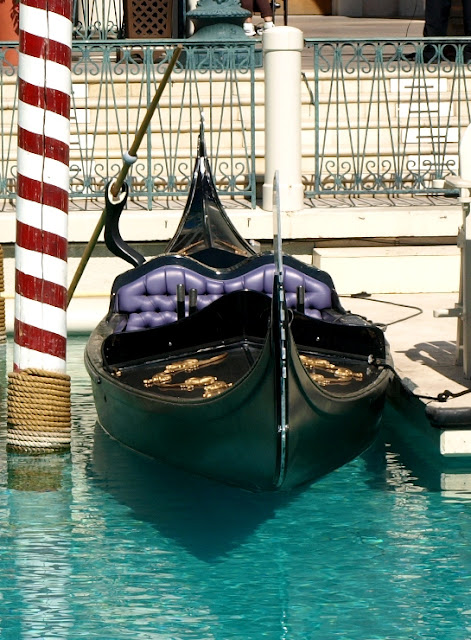 Many gondola operators and afficionados are quick to condemn these boats for various reasons, but I must point out a few things.
These gondolas were designed for a specific job in a particular waterway, and they perform that task brilliantly. 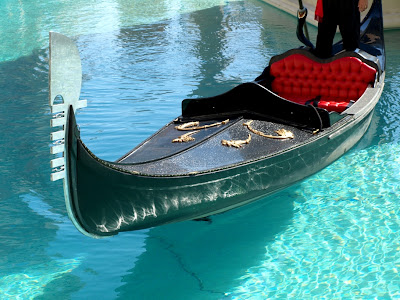 From design to production, no expense was spared, and while some materials might differ from tradional gondolas, the materials chosen for these vessels are better-suited for an environment like the Nevada desert.
I wrote extensively on the origins and details of these gondolas a couple years ago in my post "The 'Venetian' Gondola".
Later I posted more, based in part on the conversations I'd had with readers who were curious to hear about some details they'd seen or
heard about:
"Unique Features and Operation of a 'Venetian' Boat".
The fifth set of reader comments is from a friend of mine who used to operate boats there - his information is great. 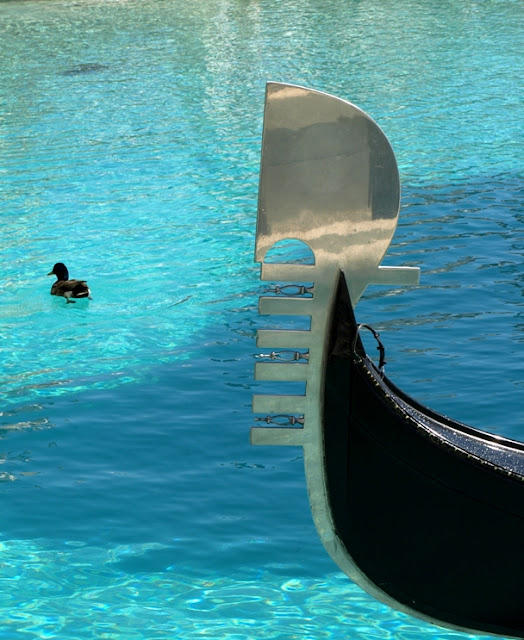 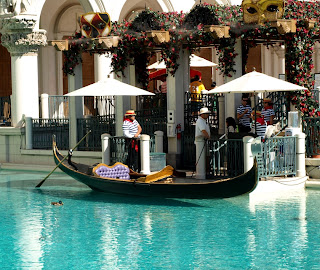 Passengers board the gondolas at a well-staffed quay,
complete with umbrellas and water-mist units. 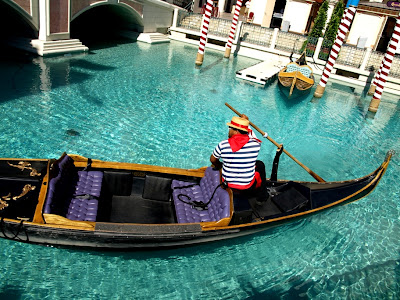 When I first saw this guy, I was a little surprised that he was sitting on the seat back, but then I realized that the gondoliers have a sort of route that has them going one way under the main arch, and the other way under one of the lower arches. 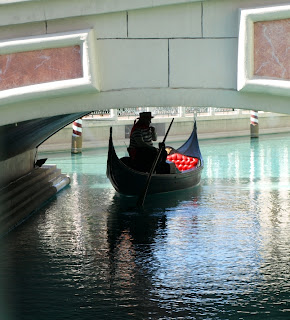 Here's another gondolier in a similar posture going under the lower arch. 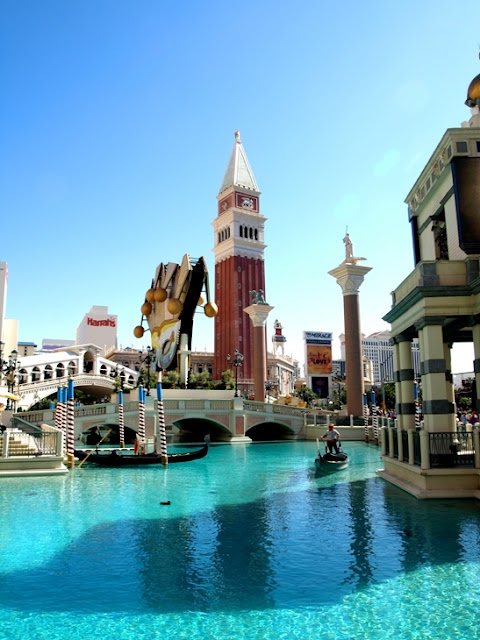 Not everything is exact, of course, but the campanile sure does bear a striking resemblance to the one it was modeled after.
Here's what it looks like after dark:
"Nightfall in Las Vegas" 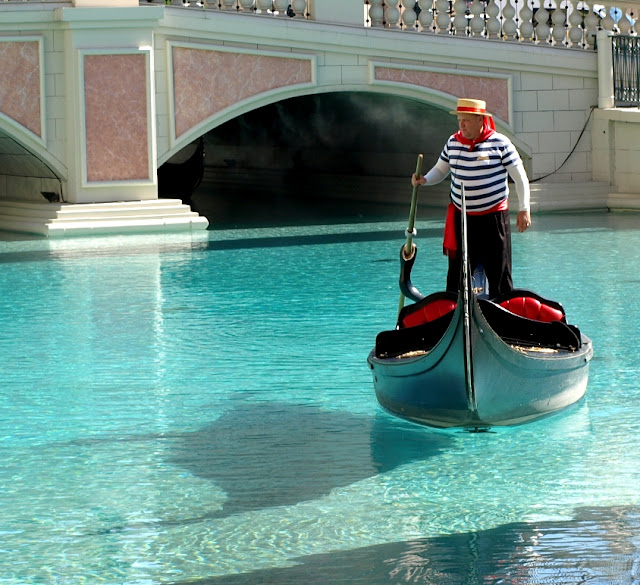 The water is plenty deep enough for the gondoliers to use their oars
(no matter what the rowing style might be),
but as you can see in this photo - it's still pretty shallow,
as is evidenced by the shadow of the boat on the bottom. 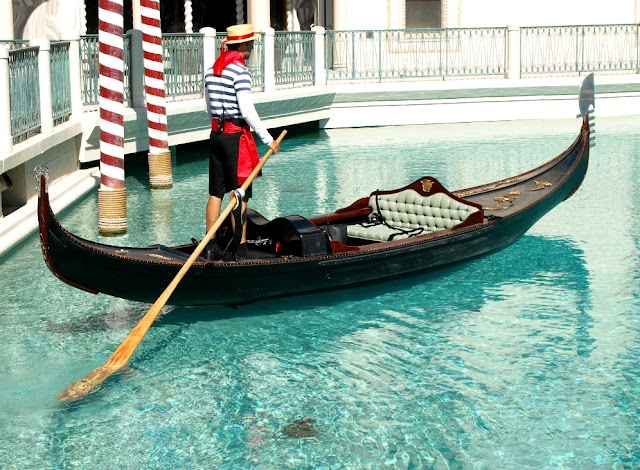 Gondoliers who spend lots of time in this kind of sunlight appear to have the option of wearing very lightweight white long-sleeved shirts.

This one guy was even wearing shorts.

Maybe I've been away for a while, but this was the first time I saw a gondolier in shorts at this operation. 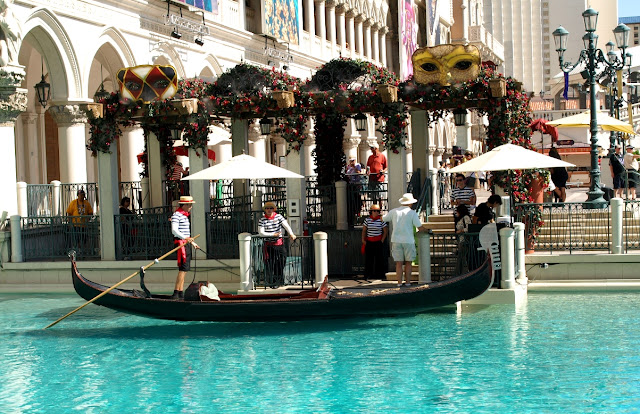 Of course if I were on a boat in the middle of a Las Vegas summer,
I'd be more than happy to exchange long pants for shorts.
Posted by Gondola Greg at 12:21 AM