Crawling around my friend Simon's gondola in Denmark, I was impressed by her pristine condition, and even more impressed when I learned that she was a thirty-five year old boat.
I took note of the brass trim, the fresh paint, and all the nice parecio pieces.
Then, Simon handed me the forward forcola, and as I moved towards the bow, I came upon a confusing sight:
Due busi (two busos).
A "buso" on a gondola is a hole in the deck for a forcola.
Typically there is additional structure beneath the deck to support the pressure exerted while rowing.
Most gondolas have only one buso up front.
Simon explained that they found it helpful to have options based on different variables. 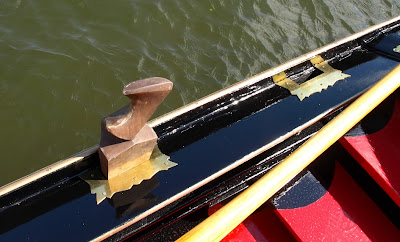 One of those variables being whether the gondola was being rowed by two or four.
Then I turned around and noticed another buso I'd somehow overlooked,
a buso in the "sestina" position. 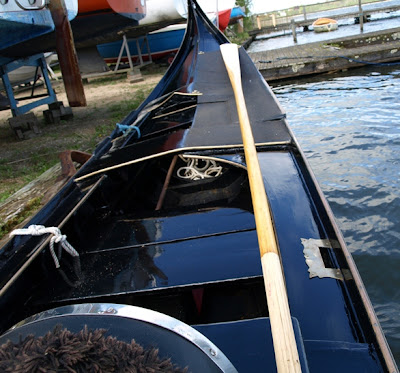 And there was another buso (for a fourth rower) but it wasn't visible at the time.
I had already determined that the Copenhagen gondola was a beautiful boat with nice appointments, then I saw that she had four busos.
Now I'm jealous.
I find myself musing over possibilities involving a jigsaw.
Posted by Gondola Greg at 4:13 PM