In previous posts we've looked at the results of both the "Slalom" and the "Sprints".

Rounding out the competitions, today we look at the "Relay".
Here's how it was described by the organizers of the event:
RELAY
6:00p - Following the end of the slalom event, all gondoliers present will be invited to participate in a relay race down and up the river. The race will begin at the Waterplace Bridge, the gateway to Waterplace Park, and two boats will race down to the Crawford Street Bridge and back up to the Exchange Street Bridge, just past the Gondola Landing.
Rules:
1. Teams will be chosen by two captains, and all participating gondoliers must remain in their gondola at all times.
2. Gondoliers must be changed at minimum under every bridge.
3. No other gondolier is allowed to propel the boat besides the one rowing in the stern.
4. The team that has the inside (Memorial Boulevard / Downtown) lane down the river must travel up river on the outside (Main Street / East Side) lane, and vice versa, with the turnaround happening anywhere outside of Crawford Street Bridge.
As it worked out, there were just the right number of rowers to put six on each boat.  Here's how the two boats placed and who was on each:
First place
Carlo and Stefano of Boston (Steve and Charlie), Evan Smith From New Orleans (who has also rowed in Boston), Matthew Haynes, Sarah Lewis, and Ryan McGowan of Providence
Second place
Joe Gibbons of Boston, Tim Reinard of Sunset Gondola, Alex Haynes, Greg Coffey, Adam Alves, and Russel Venditto of Providence. 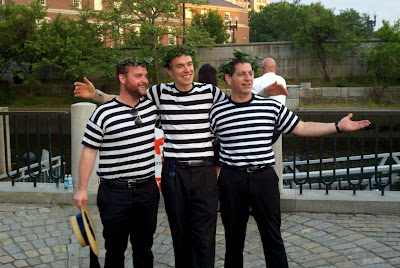 Three of the six crewmembers of the
winning boat modeling their victory wreaths.
This was a very creative approach to having six people row a boat which is only set up for one. It made for some exciting moments.
In fact I'm told that one of the boats "nearly t-boned the wall" during the relay.
That's exciting.
Of course we would be looking at everything differently if the gondola had actually made contact with the wall. 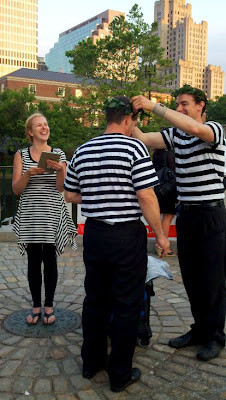 "Wreathing" in action.
By all accounts, things went very well in Providence.
Going into an event like this - a first-time endeavor with so many variables, - is daunting.  It's easy to feel like things might fly apart at any moment, but gondoliers are used to keeping order in spite of chaos.
It's no surprise to me that Matthew Haynes and his staff pulled off such a great event.
Posted by Gondola Greg at 12:48 AM