photos by Martina Zane
While Martina was standing at the apex of the Rialto Bridge,
an ambulance boat powered down the Grand Canal,
traveling at what she calls "emergency speed".
My guess is that the boat flew by so fast that she could only raise her camera lens in time to get a shot of the wake left behind. 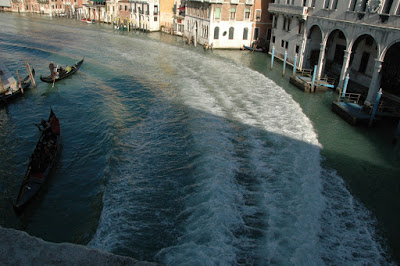 If you've ever been on a gondola when something goes by quickly,
you know what happens next.

In Newport, we deal with drunk Duffy drivers all the time.
These boats aren't really fast, but they do set up a decent wake, and you need to react to the swells and waves caused by their quick travel.
This is nothing compared to having an "ambulanza" blast by.

In Venice, just about everything travels by boat, and there are boat equivalents for all the normal street vehicles we have elsewhere, including ambulances.  Like police and fire department boats, the ambulance boats get to "blow doors" when they're on an emergency call.

Don't misunderstand me - if I were in desperate need of medical attention,
I'd want the guy driving the boat to get there quickly too.
But when an ambulanza blows by, gondoliers and other small boat operators are left to deal with the aftermath.

In this post we'll examine some of the different ways a gondolier can react to such an event.

"Ducking out"
In the words of one of my favorite cartoon characters:
"Exit, stage left!"
If a gondolier is lucky, he might be in a place where he can make a quick escape.  He can't pull his boat out of the water, but he might be able to dodge the bulk of the waves by ducking into a canal or rounding a corner into an area where the wake won't reach or where the effects are minimized.

The guy in the following close-up was lucky enough to be in the right place at the right time.  Chances are that the after-effects of the ambulance boat did bounce around in that tight canal, but he probably got away without getting slammed into the walls.  Might have even enjoyed a little surf-ride as the wave came from behind. 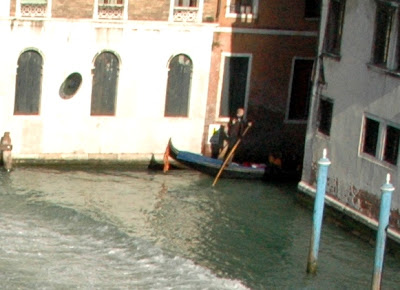 "Ducking out" in action.
Facing the problem head-on
If you have the time to turn the boat towards the oncoming wake, do it.  Riding the roller lengthwise is way better than getting hit sideways.
The gondola is long, and can handle the task.  Heck, if you have something clever to say, your passengers might even enjoy the excitement. 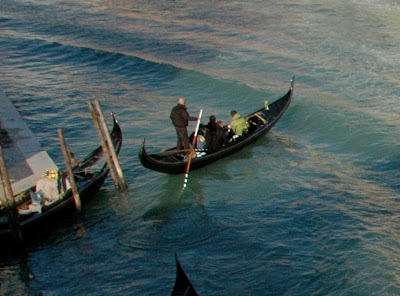 This gondolier manages to get his boat turned in time to face the wave.
Riding the wave
Depending on what direction the wave comes from, sometimes you need to turn away from it.  This usually results in a short "ride", and water might splash, but not on the passengers...usually.
Going diagonal
The guy in this next close-up was not in a place where he could turn to face the wave easily.  He could have turned his tail towards the wake, but would have likely caught a ride into the wall.
Looking at his remo placement against the sanca of the forcola, and his body language, I'm guessing this guy succeeded in turning the bow of his boat enough to at least hit the wave on the quarter.
A diagonal approach isn't as easy to ride out as taking things perpendicular (from either end of the boat), but it's far better than recieving the hit from the side.  A gondola is a very narrow boat, and a wave from the side can wreak havoc on both people and cargo. 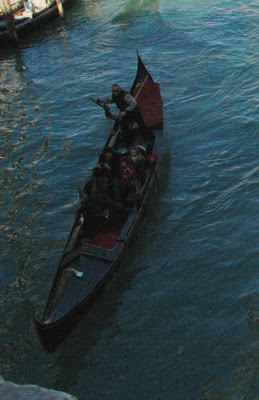 The gondolier works hard to prepare for the inevitable.
Keep your cool
If all else fails, and you're forced to endure the worst, keep your cool.
According to Martina, there was another gondola under the Rialto, which didn't ride things out quite so well.
It sounds like they took the wave from the side - my guess is that the gondolier had no choice, being in the narrow tunnel-like archway of the bridge.
Martina writes:
There was a gondola with some Japanese tourists under the bridge, too. The tourists were totally afraid of the gondola movement from the waves and jumped up - standing and obviously loosing stability. They came very close to falling in the Grand Canal!
I think it's safe to say that keeping your passengers calm, and in their seats is also an important discipline when dealing with waves.  The gondolier, if he was worth his salt, would have told his passengers to stay seated.
I'd be willing to bet that the ones who almost got baptized,
either didn't hear him,
or couldn't understand him due to a language barrier.
What to do at dock
And then there's all that flying water when the waves run out of places to roll.  If you happen to be in the "splash zone" - there's not much you can do.
As the ambulance wake reached shore, Martina snapped this photo: 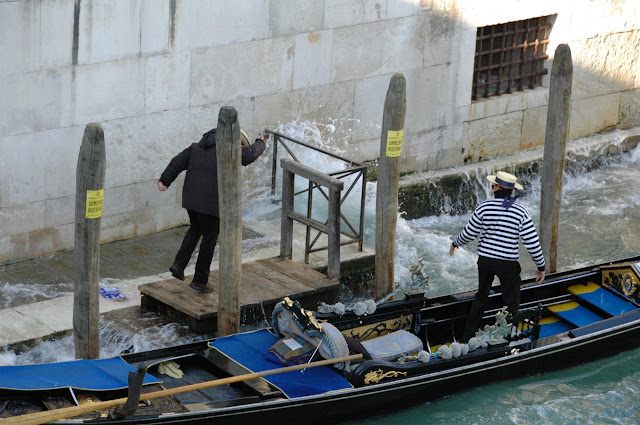 Here are a few possibilities:

Seek higher ground
The gondolier in the black jacket not only steps up to the highest platform he can find, he also has an obvious understanding of how the water likes to splash up through the seams between decking planks. He's not only lifting one foot off the deck, he's also gone up onto his toes.
As this is a still shot, the black-jacket gondolier may have even jumped into the air at the right time (like a ninja).

Martina writes:
In the second photos some gondoliers jump to avoid the wave created by the motorboat.
Maybe he is a ninja.  Everyone wants to be a ninja.

Hide in the boat
I really don't know if it's a good idea, but it's what the gondolier in the striped shirt is doing in the photo.

Run like heck
The strategy is fairly simple.
There's "fight or flight".
This one's "flight".

Here's a link to a previous ambulance post entitled appropriately enough "What to do when you're a gondolier in Venice and an ambulance boat approaches".

As you can see, the gondolier in that scenario, chose to "ride the wave".

Gondoliers are an inventive group of people.
They solve problems in creative ways.
I'm sure there are some other great methods to deal with boat wakes.
By looking at the top photo in this post, it's easy to see why there's been such an outcry against "moto ondoso".
The wake from an "ambulanza" seems unavoidable, but in the eyes of many, other boats could certainly slow down a bit.
Posted by Gondola Greg at 11:30 AM